Spring weather arrived in February to my garden. With such an early start to Spring I felt rushed and behind on all my gardening chores. Now, this didn't mean that we got 4 months of a gorgeous spring. No sirree, summer rushed in early too with 90 F (32 C) temperatures in early May. Not my favorite temperatures to garden in, especially when there is big work to do like digging holes and laying mulch. I have a sneaky feeling it is going to be one hot and humid summer. With this post, I am taking a look back at what my garden taught me this past season by participating in Lessons Learned meme hosted by PlantPostings.

In early March the new raised beds in the kitchen garden were completed. I planted some cool season vegetables (carrots, radishes, cabbage, onions and lettuce) thinking I could get a late harvest before the heat set in. WRONG! With the mild winter the heat set in early. Watering the beds regularly didn't seems to help. The lettuce and onions didn't do much of anything. A few of the radishes matured but most of them bolted. The  cabbage was on its way but then the cabbage butterflies arrived. These butterflies are considered a bit of a pest since they feed on anything in the Brassicaceae family which includes cabbage, kale, cauliflower, broccoli, radish, Brussels sprouts and turnips. Some research also shows that its presence may be linked to the decline of the Mustard White butterfly. Next year we will need to build a screen cover for these plants to prevent the butterflies from laying their eggs here. I was really looking forward to some fresh, homemade slaw. 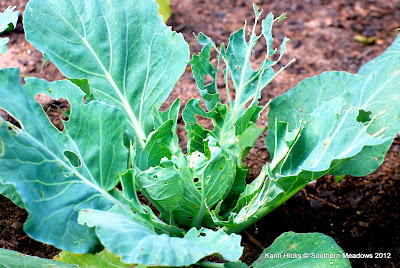 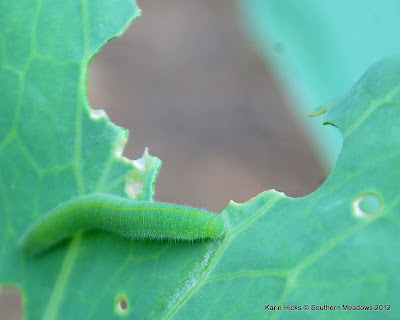 Lesson #2: Make sure there is enough food for the caterpillars I am trying to attract to my garden 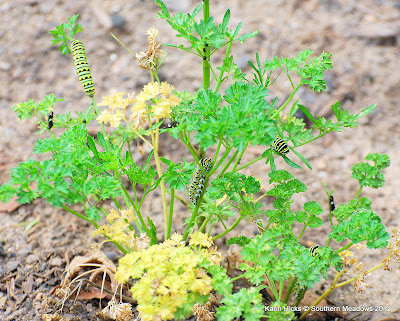 There were already some first and second instar caterpillars on this plant so there was some serious competition. I think I saw a little fighting going on...at least some head bobbing. 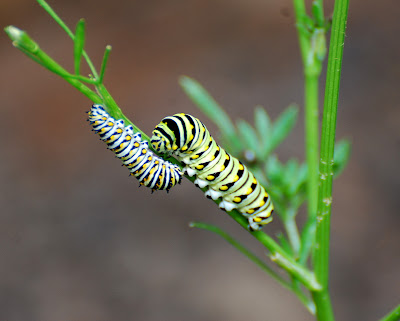 Horror...we need more plants. But wait, we have some spindly carrots in the raised bed next to the herb bed and sure enough the caterpillars found them. Well, at least the carrots were good for something! But I ran out and got a few more parsley and fennel plants anyway. 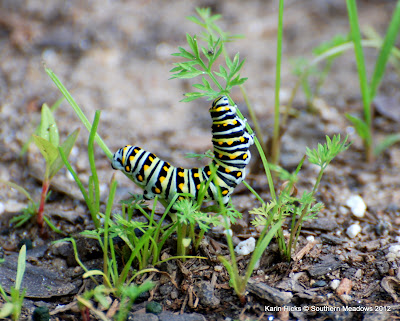 Lesson #3: Be mindful of where you step

In the spring there is a lot of wildlife making their way around the garden. We found several caterpillars (buckeye, black swallowtail, variegated fritillary)  in the paths searching the garden for a place to pupate. We wouldn't want to step on them!

While on a plant rescue at a local nature preserve we came across this buck moth caterpillar. This caterpillar will sting...those spines discharge poison that will result in a small hemorrhage on the skin. 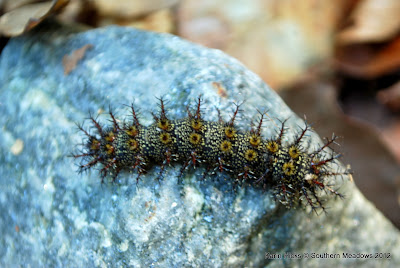 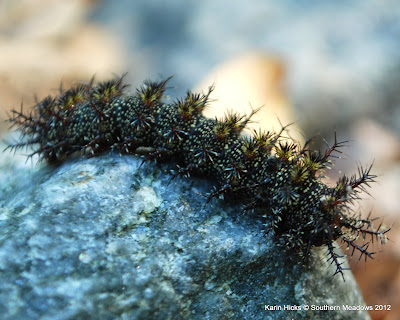 As the weather warms the snakes began to move around. Although harmless, the rat snakes can give your heart a little jump if you run into one unexpectedly. 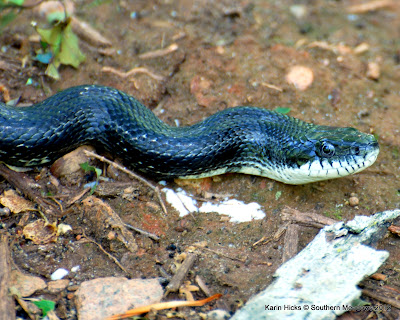 Lesson #4: Know the wildlife in your area

One evening my husband was working in his workshop when a snake came out from underneath the saw table. My husband encouraged it to go outside but the snake curled up and raised its head as if it were preparing to strike. My husband wasn't sure what type of snake it was so for the sake of safety he killed it. Later we did some research to properly id the snake and think it was a type of rat snake (nonvenomous). But see how different it looks from the black rat snake in the photo above. 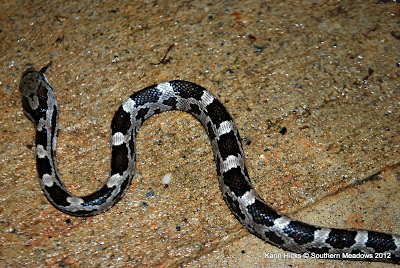 Properly identifying the smaller critters is also important. To know if it is a pest or beneficial insect is critical in deciding how to handle them. Like this bug that I found on a milkweed plant which I still haven't successfully identified. As I am not sure if it is a beneficial or pest I left it alone. 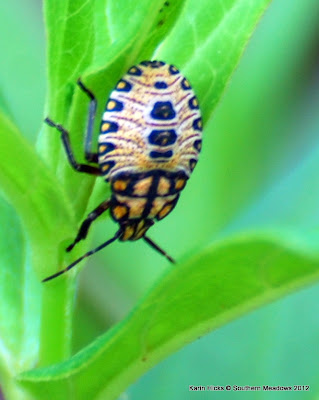 Lesson #5: Annuals are an important filler during those lull times.

My garden is mostly perennials with some biennial plants. This spring many of these plants bloomed ahead of schedule while others bloomed at their regular time leaving a lull in blooms. So, this year, more than ever annuals filled an important gap not only as a food source for pollinators but also visual interest in the garden. I placed pots throughout the garden with annuals and a few perennials to fill in these breaks. 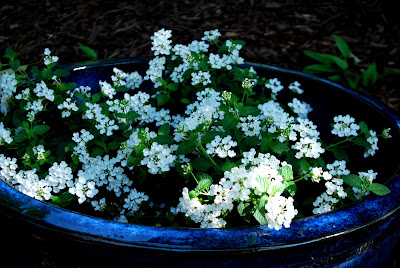 I am learning all the time.
The tombstone will be my diploma.
~Eartha Kitt

Join me next week when I join Gardens Eye View for a look forward at summer with Seasonal Celebrations.