Have you ever seen a fox squirrel like this?

Fox squirrels (Sciurus niger) are one of the most variable colored tree squirrels in the world. They are known for their rufous colored fur but their upper coloring can in fact range from black, silver and red. Whereas their body coloring can differ, they all have reddish-orange bellies. A consistent feature of these squirrels in the Southeast is a dark facial mask around the eyes and nose with the tips of the nose and ears being white. 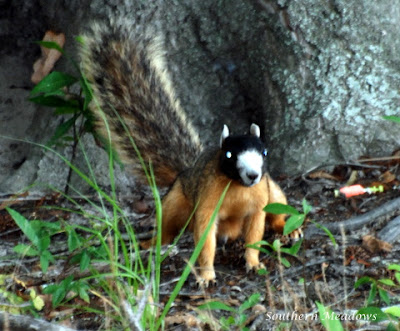 They are large squirrels weighing about 3 lbs. with bodies about 10 inches long and their tails equally as long.
Despite the fact that the fox squirrel is found along the eastern parts of North America over to the Great Lakes and the Canadian border populations are scattered and densities low. This is my first time seeing this masked face squirrel sometimes referred to as a raccoon face squirrel. My in-laws are happy this unusual looking squirrel has taken residence in a tree at their farm. 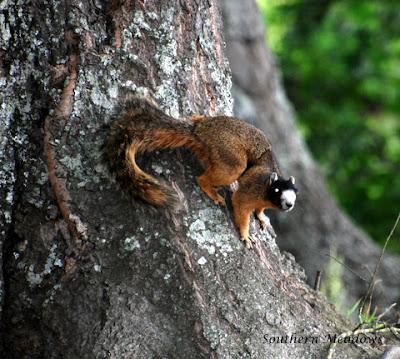 Most people have an opinion about squirrels. Some people feed them and others consider them a nuisance and try desperately to get rid of them. Which ever side of the fence you fall, it is important to know that squirrels play an essential role in the composition of forests. Some years they may eat most of the seeds produced by trees but when squirrels bury seeds and forget them these seeds will sprout promoting the growth of certain types of trees. Squirrels are also an important source of food for hawks and owls and the babies are sometimes taken by snakes. 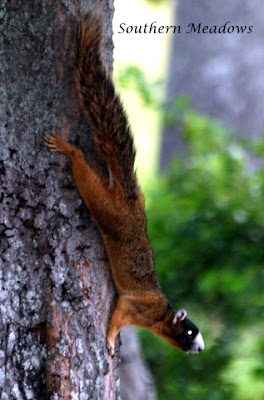 (I apologize for the quality of these photos. My only chance to photograph this squirrel was right before a strong storm rolled in and it was very dark and I had to use flash.)

My next post will feature all the flora and fauna found at the family farm.
Labels: fox squirrel raccoon face squirrel