(Warning: not for the faint-hearted or squeamish)
While working in the garden this past weekend my hubby found this... 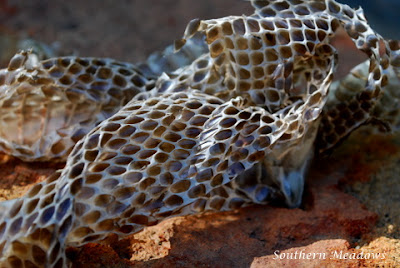 A snake had shed its skin near the wood pile. A super cool find in our household! We haven't seen any snakes in the garden yet this year but this is evidence that they are here. But who does this skin belong to?
Northeast Georgia has a variety of non-venomous snakes including this Eastern Ribbon Snake (Thamnophis sauritus). He is often found basking in bushes but if startled will retreat to the nearest water source. They glide across the top of the water very gracefully. 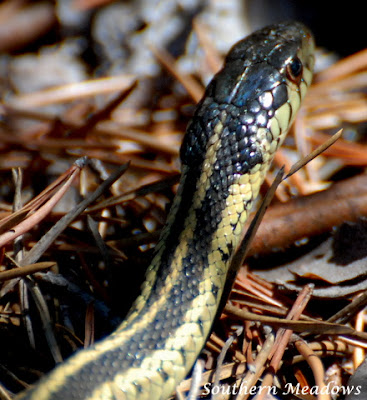 And, this Rough Green snake (Opheodrys aestivus) the most arboreal snake in the Southeast. They spend most of their time climbing vegetation hunting for insects, spiders, and other invertebrates in the flora well above the ground. Not a bad little guy to have around. 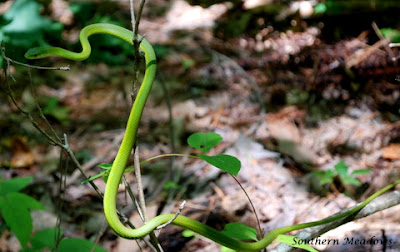 But in most likelihood this skin belongs to a black rat snake (Scotophis alleghaniensis) a common snake we see occasionally in our garden during the hotter months. 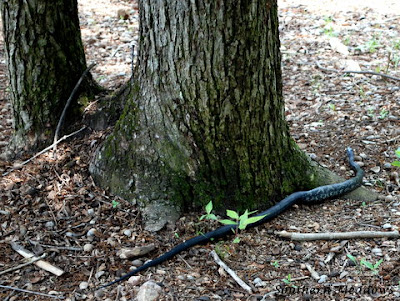 The black rat snake is actually good to have around because they keep the venomous snakes at bay. If I had my choice I would rather have a black rat snake in my garden than a venomous snake any day.
Last spring we found these two (look closely and you can see two heads and two tails) at the back corner of our house. Admittedly, my heart starts to race when I see any snake but I calm myself knowing they are harmless and a sign of a thriving ecosystem in my garden. They eat mice, rats, squirrels and birds (and maybe the occasional vole or two). 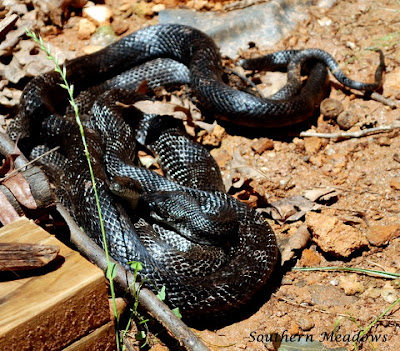 I suspect these two were mating. Once they separated we could see that one snake was about 4 ft. long and the other about 6 ft. long.

But what is it about finding a snake skin that is so intriguing? The mear fact that snakes can shed their skin fascinates my children. There is just something about an animal that can slide out of its skin several times a year that fires the imagination.
Snakes shed their old skin when they have outgrown their existing skin and formed a new layer of skin below it. When the old skin begins to disconnect the snake’s colors become dull and its eyes look milky or bluish. When the old skin is completely separated from the new skin it splits open at the snake’s nose and then begins to peel back. The snake helps the process by rubbing against a rough surface such as a rock or log. The new skin has the same patterns and colors as the old skin but the old skin doesn't look exactly the same as its replacement. It takes on a nearly transparent appearance. 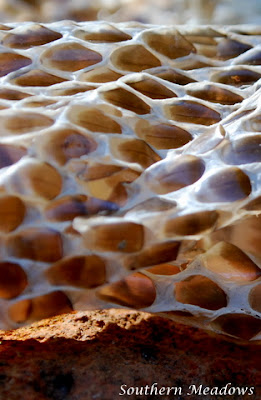 Here is a view of the interior of the skin layer. 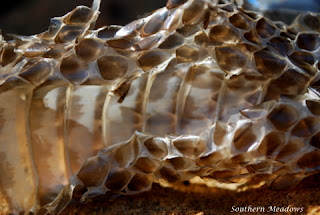 Snakes are one of the most misunderstood and feared creatures in this world. But a snake in the garden helps deter unwanted visitors such as rabbits, mice, moles, voles, and some other snakes. They are a middle order predator which are food for Birds of Prey and other snakes.

So, don't fear the snake but respect it.