Another attraction at Callaway Gardens is the Birds of Prey show. This educational program is held at a small, outdoor amphitheater by the lake that allows these magnificent birds to demonstrate their speed, strength and natural instincts during the free flight show.

It is a rare opportunity to see these impressive birds up close as they swoop directly over the audience and where the handlers walk around with the birds so everyone has a great view no matter where you sit. 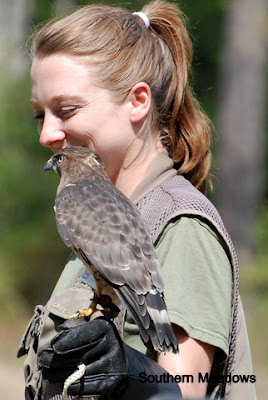 All the birds used in this program have been rescued and can not be released in the wild because they can't survive on their own. Many have been rehabilitated from injury or taken from well-meaning rescuers. The birds are held and handled under special permits issued by the U.S. Fish and Wildlife Service and the Georgia Department of Natural Resources.

The handlers bring out between 3 to 5 birds of the 12 that call Callaway home making the shows different each time. We saw 5 different birds, two diurnal (hunt by day) and three nocturnal (hunt by night).

The first bird to take the stage was this beautiful broad-winged hawk, found by a well meaning individual who, not knowing better, tried to rescue this bird when it fell out of its nest. Unfortunately the hawk became imprinted. 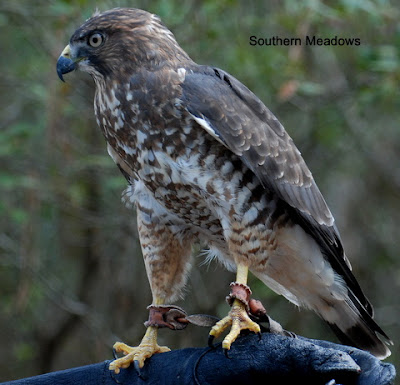 Imprinting is a species-specific type of learning during a critical early period (normally 4-10 weeks old) where the bird’s social attachment and identification are established. Imprinting is an irreversible process that “steals” the bird’s self-identity as a raptor. In other words, when the hawk sees a human it takes a photo snap shot and for the rest of its life believes that humans are its mother and mate. You can see the problem that arises here.

An imprinted raptor cannot be released because it will not thrive in the wild. Other raptors recognize its difference and refuse to allow it to establish a territory, which is necessary for hunting and breeding. An imprinted raptor that escapes is also a danger to humans because it identifies humans as caretakers. When it becomes hungry, it will fly to humans for food. However, the bird is not like a tame bird that will perch on one’s shoulder. A raptor with needle-sharp talons and knife-sharp beak can unintentionally seriously harm a person. 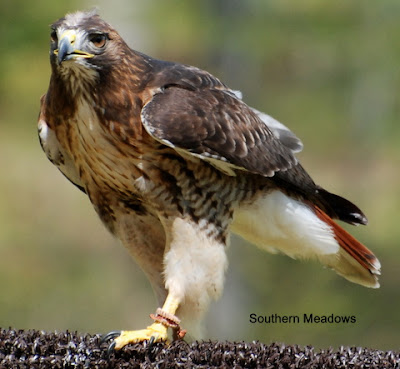 The other raptor we saw was this beautiful red-tailed hawk. It is a member of the Buteos group which are thick-bodied hawks with broad wings and rounded tails. He had quite the personality and showed us his moves over the lake and up in the pine tree. 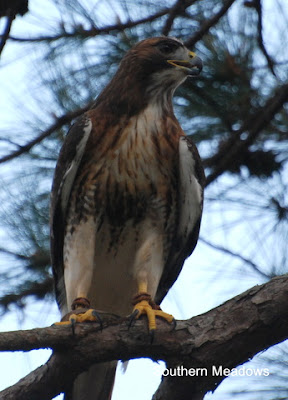 The first of three nocturnal hunters was this adorable little Eastern Screech Owl. He will stand only 8 inches tall at maturity. This is the most common owl found in Georgia living in both suburban and rural areas as long as they have open woodlands or backyards dominated by mature hardwood trees. According to the Georgia Department of Natural Resources, each year logging, land clearing and other activities reduce the number of cavity trees.  As a result, screech owls must compete for these sites with wood ducks, squirrels, starlings, house sparrows, raccoons and a host of other species. 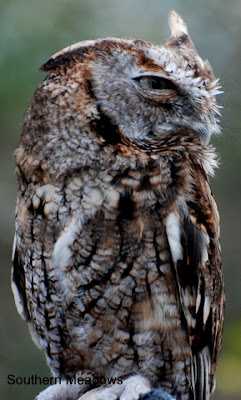 This Screech Owl was hit by a car and has damage to one of his feathered ear tufts (which are not really their ears). That is why the ear tuft is flat on his head instead of sticking straight up.

Owls have the best hearing of all the raptors. Their ears are located on the side of their head. The left ear is higher than eye level and points down, while the right ear is lower than eye level and points up. This allows sound to reach each ear drum at a fraction of a second different so the owl's brain can figure out where the sound is coming from and find its prey. 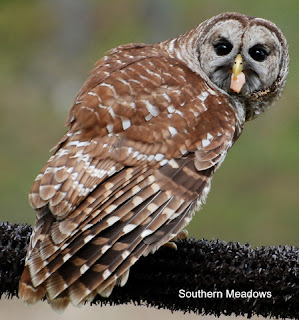 Look at this gorgeous Barred Owl. He has the most amazing eye sight. Their eyes are adapted to see in dim light, almost 100 times better than humans can. Their eyes are similar to the shape of a light bulb with the largest part on the inside of their head, so the part of the eyes that we see is actually the smallest part of the eye.

Barred Owls live up to 10 years in the wild. Most deaths are likely to be related to humans (shooting, roadkill). The Great Horned Owl is their only natural enemy. 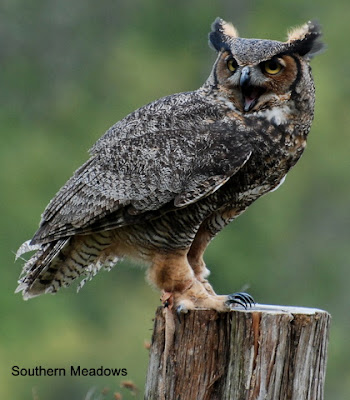 This Great Horned Owl put on a great display, even showing us its vocal talents. They have a large repertoire of sounds, ranging from deep booming hoots to shrill shrieks but the one we all recognize is the hoo-hoo hoooooo hoo-hoo which can be heard from several miles away. 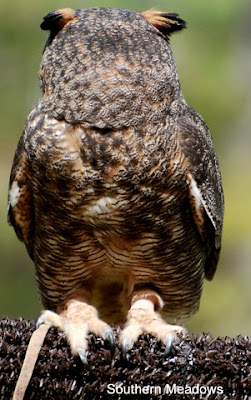 They can even turn their head an amazing 270 degrees. He even gave us a demonstration.

The number of raptors in North America are declining and some are even listed as rare and endangered species because of loss of habitat, pollution, pesticides and illegal hunting. All raptors are protected by state and federal laws. It is illegal to harm them or to keep them in captivity without special permits. 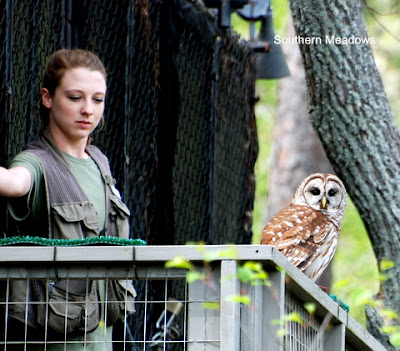 Raptors have an important role in the environment. They help control populations of rodents and other animals by hunting and catching prey. They also prey on weak and unhealthy animals. Backyard birders often dislike birds of prey because they take the songbirds; however, when raptors do take backyard birds, they are usually capturing the oldest and weakest birds. By culling these less than prime specimens, they actually help improve the strength of the backyard flock and will help the other birds survive.

Birds of prey are necessary to keep the earth in balance. By creating a wildlife habitat in your backyard you can help restore their populations. Creating wood piles where rodents will live will provide food for the raptors. Putting up houses or planting hardwoods where the raptors can nest will enable them to build there homes in your garden. I would welcome any and all of these beautiful creatures to my backyard.