Another must see at Callaway is the Horticulture Center which incorporates five acres of tropical and sub-Mediterranean gardens and greenhouses. It is home to an amazing array of orchids, sedum and succulent plants. 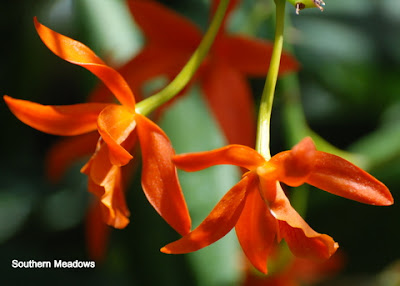 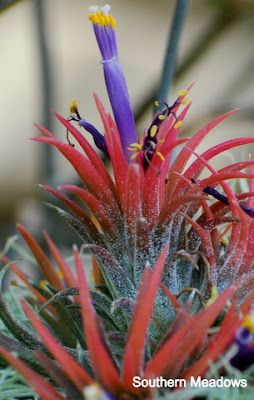 The Rockwall Conservatory features a dramatic collection of yuccas, agaves and aloes. 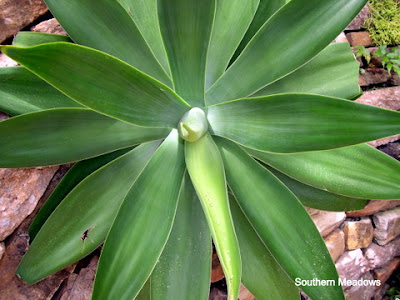 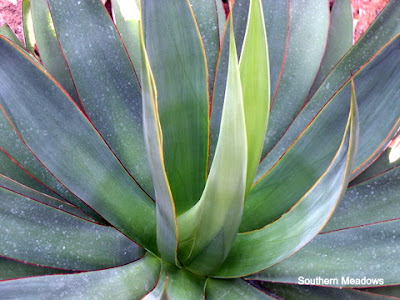 The retaining wall was constructed with materials recycled from a former garden, including Georgia fieldstone and chunks of broken concrete salvaged from the old walkways. New black slate was added for contrast in texture and color. 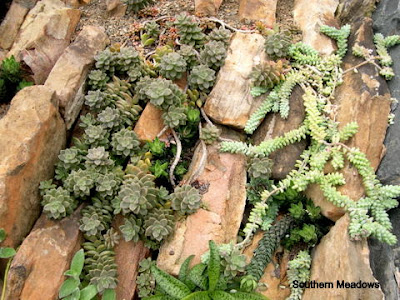 But the most interesting part of the center was learning about one of my favorite fruits....the banana. I eat one every day! It has amazing health benefits packed with minerals and vitamins and is high in fiber. It is also used for a long list of medicinal purposes from curing mosquito bites to helping with morning sickness and a cure for the occasional hangover. (note: one of the quickest ways of curing a hangover is to make a banana milkshake, sweetened with honey. The banana calms the stomach and, with the help of the honey, builds up depleted blood sugar levels, while the milk soothes and re-hydrates your system.)
Banana plants grow at my in-law's farm in Mississippi. Here is a photo taken 4 years ago of my two little monkeys playing in the banana plants. And yes, they really were pretending to be monkeys. 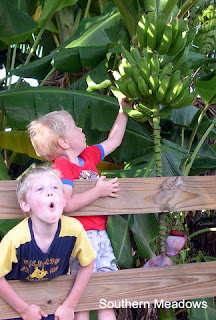 At our walk through of the Horticultural Center we were able to see the banana at its various stages of growth which is something we don't get to see at the farm.

The edible banana grown in the horticultural center is 'Dwarf cavendish' which is native to S.E. Asia and Northern Australia. The banana plant grows to about 15 to 30 feet. We felt dwarfed by its size. People often think of it as a tree but it is actually the world's largest herb! In fact it is the largest plant on earth without a woody stem. Amazing! But why is it an herb and not a tree? Its trunk is not a true one. It is actually many leaves tightly wrapped around a single stem which emerges at the top as the fruit-bearing flower stalk. It dies back after each fruiting and then produces new growth for the next generation of fruit. Remarkably some banana trees continue producing up to one hundred years.
According to the horticulturalist, bananas possess a unique scientific phenomenon called "negative geotropism." As the little bananas start to develop, they grow downward...as gravity would dictate. Slowly, several "hands" develop vertically and form a partial spiral around the stem. As they take in more and more sunlight, their natural growth hormones bring about a most puzzling phenomenon, and they begin to turn and grow upward. The entire stalk, known as a bunch, takes up to a year for the fruit to ripen enough to be harvested. 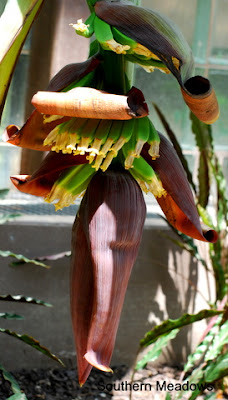 The stems are made of layers and layers of leaves that are wrapped around each other. Though quite large and thick, the stems are not strong and woody like most fruit trees and can break under the weight of many bunches of bananas. Here you can see the leaves unfurling, exposing the bananas. 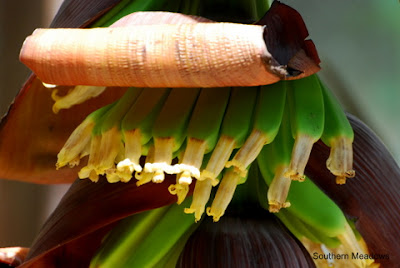 Each hand has about 20 bananas while each bunch will yield about 200 "fingers" or bananas. 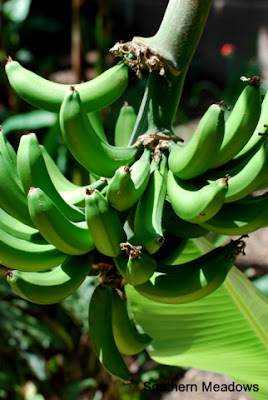 The bananas begin to ripen as soon as they are picked. It is important that they are harvested in the green state at just the right time. If harvested too early, they develop a floury pulp instead of a delightfully sweet flavor.

Bananas are a member of the Musaceae family which includes palms, grasses and orchids. Just another reason to love bananas. 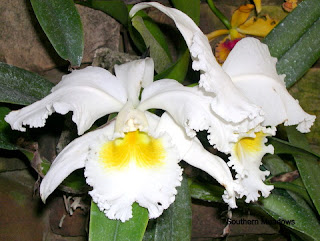 My next post will explore the Butterfly Center at Callaway. I hope you will return to see some beautiful flights of fancy.
Labels: Bananas Callaway Gardens orchids succulents