I love butterflies; that isn't news. But seeing a new butterfly in my garden is newsworthy. This gorgeous butterfly was fluttering all over my Indian Hawthorne shrubbery the other day. 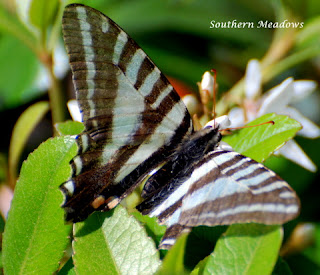 I ran inside to get my camera as my son stood watch.The plan was if the butterfly decided to fly off he was going to track it. Luckily it liked the blooms and it stayed around long enough for me to get a few photos. After it flew off we stood wondering what type of butterfly it was.

So out came the butterfly books and the research began. It was a large butterfly but it was difficult to determine the wing structure because this particular butterfly had lost significant parts of its hindwings. 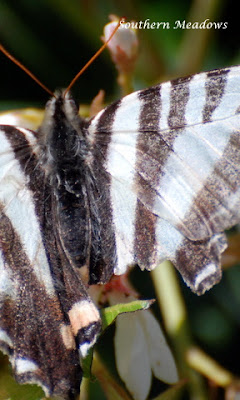 Had she gotten tangled in a spider web? Attacked by a bird? I don't know but she was surviving nonetheless.

The wing color appeared to be a greenish-blue when the sun hit it. So we looked at all the different "blue" type butterflies that either live in our area or migrate through. None of them fit.

Then we pulled up the photos I had taken to look for some more clues. We noticed some markings resembling those of a swallowtail. 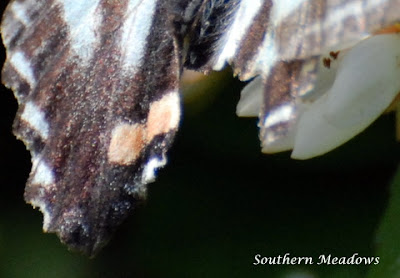 The one photo I got of the underside of the wing confirmed that this was indeed a swallowtail. It has the bright red stripe common to some swallowtails. 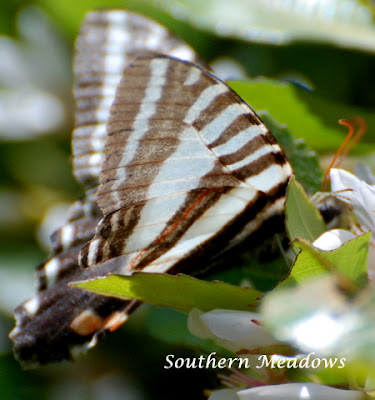 So now that we had narrowed down the family of butterfly it was easy. This is a Zebra Swallowtail. They are part of the Kite-Swallowtail group because of their triangular, kite-like wings. Normally they are easy to identify from the bright red and blue markings on the hindwings but they were missing on the one we saw. The stripping on the zebra swallowtail is described as black and white. The white we observed was very shimmery and showed tints of greens and blue depending on how the light reflected on the scales that make up the wings. 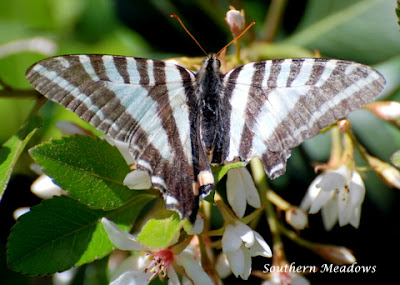 The Zebra Swallowtail is listed as uncommon but can be common in the right habitat. The host plant for these butterflies is the Pawpaw and apparently they never travel far from the tree. I don't have a pawpaw tree in my garden. There must be one somewhere close by but rest assured at my next visit to my favorite nursery I will be picking up one or two. And the bonus is that these trees are also native to the southeast.
Labels: Pawpaw tree Zebra Swallowtail