Look what we found hiding out in the rockery. Isn't she gorgeous! 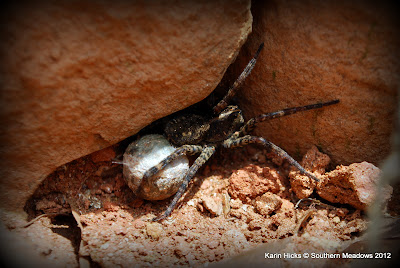 Many people run to the hills when they even hear the mention of a spider probably influenced by this popular nursery rhyme from their childhood.


Little Miss Muffet sat on a tuffet
Eating her curds and whey,
Along came a spider,
Who sat down beside her
And frightened Miss Muffet away

In fact they are really fascinating and beneficial creatures to have in your garden.

We identified this as a wolf spider but it is difficult to know since she didn't stick around for long and it was hard to get a good look at her face. This is one of the few spiders that don't make a web. They live on the ground and have very keen eyesight to hunt insects. 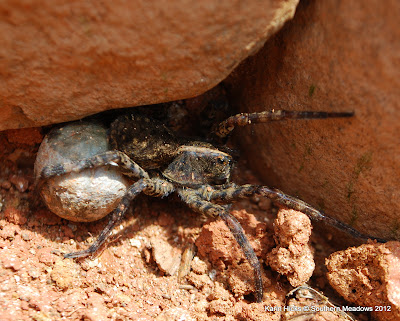 See the round ball at the back of the spider that almost looks like a rock? That is her egg sac. Once the female has mated she lays a clutch of eggs and wraps them in a round, silk ball. She then attaches it to the underside of her abdomen. This is a unique characteristic of the Wolf Spider. Can you imagine carrying around a ball bigger than your abdomen? Oh wait, been there done that! When the spiderlings hatch they will climb on her back and hitch a ride until they have grown enough to venture out on their own.

Take a look at the photo below. 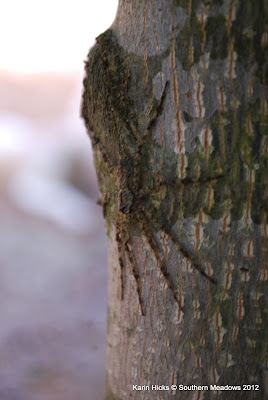 Do you see someone blending into the tree trunk? This is a spider cleverly camouflaged. My son's keen eye spotted this guy hanging out here. I used flash on the photo below to take a better look. 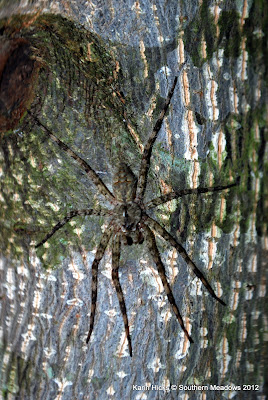 This looks like a Fishing Spider (Dolomedes tenebrosus) named because some species are often found near water catching insects. However, they are more common in woodland areas. Maybe it would be more fitting to call it a tree spider as my husband likes to refer to them. They look similar to a Wolf Spider in size, shape and coloring. These spiders often hide amongst rocks during the day and hang out in trees at night waiting for prey.

Spiders are often victims of pesticides that people spray in their gardens which kills the spider's food source but also the spiders themselves.
Labels: Fishing Spider Wolf spider with egg sac