Progress in the Orchard

Today is Johnny Appleseed Day. This day honors one of America's great legends. Johnny Appleseed (real name John Chapman) was a pioneer nurseryman who introduced apple trees to the states. As he traveled West he planted apple trees along the way and also sold trees to settlers and so his legend grew. He is also known for his leadership in conservation and his kind and generous ways. 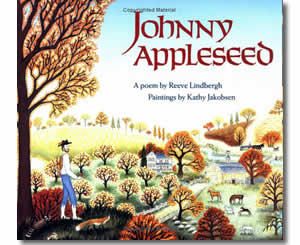 I don't have any apple trees growing in my garden but it seems appropriate to write about one of the fruit trees that is blooming in my orchard right now in honor of this legend. 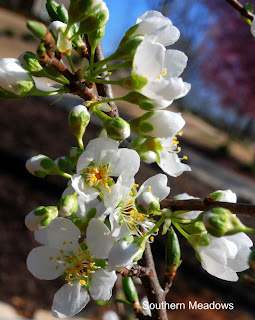 We have three plum trees. A Menthley which is an early season variety that is somewhat self-fertile and crops reliably and two Burbank (Prunus salicina) which is the most commercial of plum trees and produces a purplish-red fruit. Generally plums are not self-fertile so at least two plum varieties are needed for pollination and fruitfulness. One variety acts as the pollen parent for the other variety and vice versa. 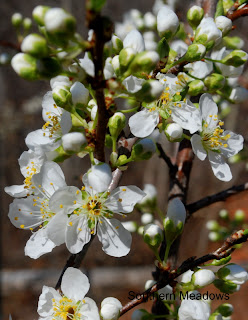 As beautiful as these blooms are now the real work begins...hand-thinning the blooms. This is recommended to improve crop yield and it also helps in pest control. If the fruit is bunched together it gives the bad bugs a great place to hide.
Many farmers around the world have believed that the spots on a ladybug tells the fortune of the next harvest. If there are fewer than seven spots, the harvest will be good. Well, look what I found, a lady bug without spots! Does this mean we will have a bountiful crop of plums this year? We shall see... 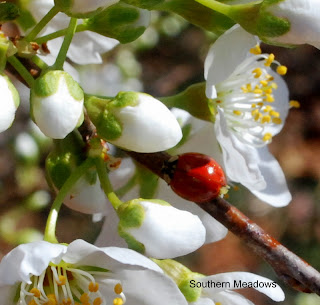