Today, we spotted our first snake of the year. The snakes usually start to come out from hibernation between March and May. This is a beautiful black rat snake (non-venomous). It is approximately 4 feet long and was slithering along at a steady pace in the back garden when my husband came upon it.

Rat snakes are rather shy and avoid being confronted. If they are confronted they will freeze and remain motionless as this snake did several times in our presence. I don't think when he wandered out today he thought he was going to a photo shoot. 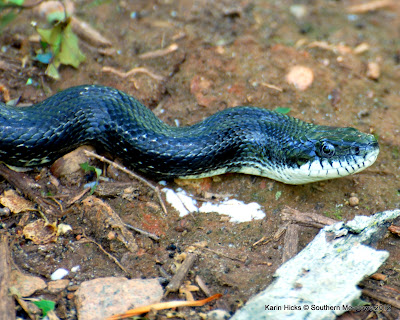 He (or she) has really beautiful scales...black but when the sun shone on it almost a deep purple. It was difficult to capture all the nuances in the photographs. 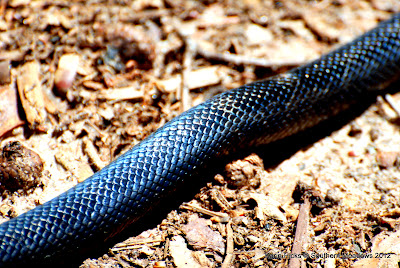 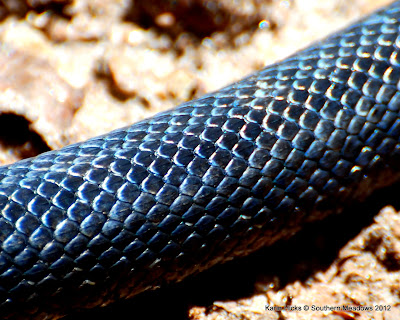 These snakes are welcome in our garden as they are an important part of the food chain and help keep our population of mice, chipmunks, moles and voles in check. During the spring months they usually look for food during daytime hours but during the summer months when nights are warmer they often hunt in the evenings.

Today, our friend must not have been hungry because he passed right by a Five-Lined Skink and Eastern Fence Lizard and didn't think twice about them. Perhaps he had other things on his mind such as finding a mate. 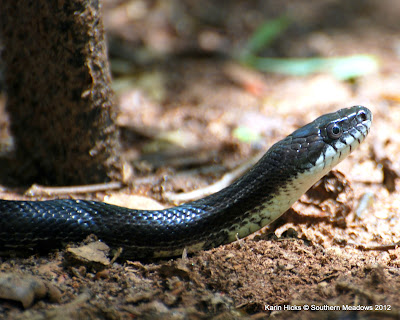 At Southern Meadows we like to celebrate our earth everyday and what better way to be rewarded than to have this visitor in our garden. Happy Earth Day y'all!
Labels: black rat snake Earth Day