Can You Guess What This Is?

This past weekend was just spectacular...sunshine, temperatures in the low 70F with a slight breeze. My family and I took full advantage of our mid-winter heatwave and got right to tidying up the gardens. When I was cleaning up in the woodland garden I found this maple leaf with a sack looking thing attached to it. 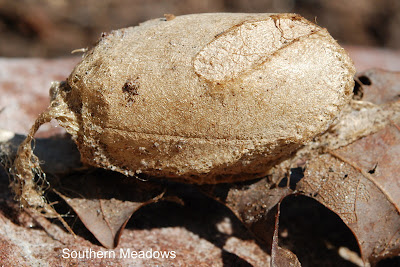 Do you know what this is? I have never seen anything like it before. I thought it was probably a nest of some sort of insect but frankly I didn't have a glue which one. Any guesses?
The material is pretty sturdy. It feels almost like Styrofoam. It is approximately 1.5" long. 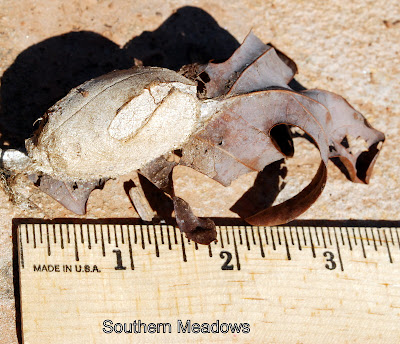 The front of the sack has a small opening. From this angle you can also get a better idea of what the sack is made of...almost silk-like threads. Have you guessed who this belongs to yet? 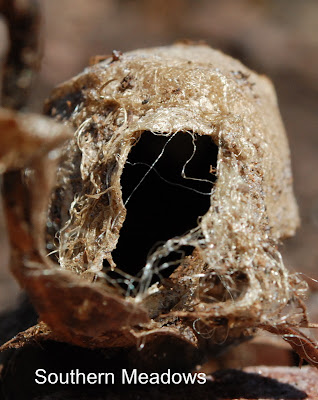 After complete inspection of my discovery I still didn't really know what it was. I needed to enlist the help of others. I took it to my local Extension Office to ask some of my Master Gardener friends. They had lots of ideas but no one knew decisively what it was. So, I took it over to our local Nature Center, Elachee Nature Science Center, to speak with a Naturalist. Brilliant! She knew exactly what this was.
Are you ready?
This sack, is in fact an ootheca. A what? An ootheca, a type of egg mass which contains many eggs surrounded by a protein which then hardens into a tough casing for protection. The ootheca making insect that created this egg mass is none other than.... 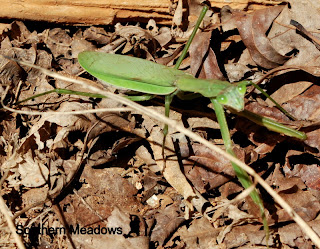 ...praying mantis
I see them with regularity during the summer months in my garden. I have a love-hate relationship with these insects. And this is why...
Praying mantis (or praying mantids) get their name from their front legs that are bent and held at an angle to suggest the position of prayer. The name "mantis" comes from the Greek work 'prophet' or 'soothsayer'. All very righteous. But wait...
Quite unlike their name denotes, they are formidable predators.  They are the only insect that can turn their heads 180 degrees to check out their surroundings. A little creepy if you have ever been stared down by one of these creatures. With their compound eyes, which are highly sensitive to movement up to 60 feet away, they really look like some alien from another planet. Thank goodness they max out at 6" long. 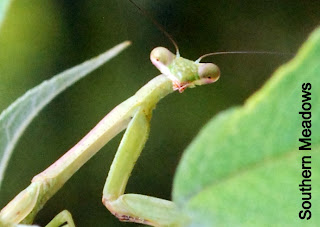 Camouflage is very important to a praying mantis' survival. It is key to protecting themselves against their many predators (birds, bats, frogs & snakes...).  Do you see how well she is camouflaged on my Buddleia? They are almost invisible on a leaf or steam of a plant. 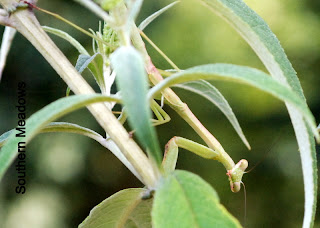 Camouflage is also an important part of ambushing their prey. They wait quietly ready to catch their pray when it passes. They use their front legs which are equipped with rows of sharp spines to grasp their prey. Then they bite the neck of their prey with their very powerful jaws to paralyze it. The praying mantis then begins to devour its meal. They eat beetles, grasshoppers, butterflies, moths, crickets, spiders and other bugs. They have also been known to eat others of their own kind. The most notorious example is the female eating her mate just after or even during mating.  This behavior however doesn't seem to deter the males from reproduction.
They breed during the summer months. After mating the female lays groups of 12-400 eggs in the fall in a frothy liquid called an "ootheca" that turns into a hard protective shell (see my photos above). The small mantids live in this shell during the wintertime and emerge in the spring. Often, their first meal is a sibling! No love lost there.
Now before you decidedly hate these insects for their cannibalistic and  predatory ways note that the young mantids (or nymphs) eat  leaf hoppers, aphids and small flies.  That is a very good thing to a gardener. In fact praying mantis are terrific pest exterminators. They assist in controlling populations of bugs that are a threat to farming. So, other than being indiscriminate eaters in our gardens and cannibalistic they can be a beneficial insect.  Perhaps their shortcomings should be overlooked? or not? Either way, I think I had a pretty good find in my garden that day.
Labels: beneficial insect nest ootheca praying mantis