Arbor Day in Georiga...Plant a Tree

Georgians celebrated Arbor Day on Friday. In 1941, the Georgia General Assembly set the third Friday in February as the state Arbor Day. While National Arbor Day is the third Friday in April, many states dedicate another day in the year as the state Arbor Day (Arbor Day Dates Across America) based on the time of year when it is best to plant trees. In Georgia, trees planted between October and mid-March have the best chance of becoming established before our summer heat sets in.

This weekend Mr. Southern Meadows and I added a few new trees to the woodland garden. Earlier this week, we took a trip to one of our favorite nurseries here in Northeast Georgia, Full Bloom Nursery and purchased two dogwoods (Cherokee Brave and Cherokee Princess), and a coral bark maple.

Here in Georgia our dirt is actually clay, Georgia red clay (a.k.a brick). As much as Scarlet O'Hara learned to love this clay, I haven't found the same enthusiasm. While some plants like kudzu grow ravishingly well in the clay, for most plants the density of clay makes for very poor drainage and provides limited oxygen. For most transplanted trees this is a recipe for death. So, there are several steps we took to make the environment more friendly for the health of our new trees.

STEP 1
First, Mr. Southern Meadows dug a hole twice as wide and twice as deep as the root ball of the tree. 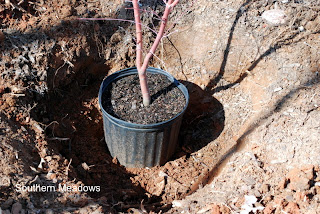 STEP 2
We filled the hole with some rich, organic, soil which is enhanced with some nice, smelly, cow manure. 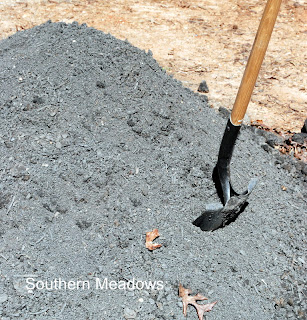 STEP 3
We took the tree out of the growing container and gently loosened the soil around the roots so that they can establish themselves better by making optimal contact with the dirt. Placing the tree in the center of the planting area so that the rootball is just below the ground level. 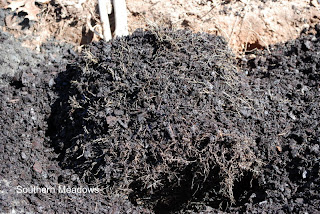 STEP 4
Backfill the hole with the soil from the growing container, organic dirt and a little bit of the clay soil. 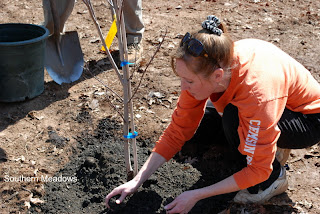 STEP 5
Water the tree with several gallons of water to settle the soil and remove air pockets that may be around the roots.

STEP 6
Cover the entire area around the tree with 2" to 4" of good organic mulch keeping the mulch 1" away from the base of the tree. 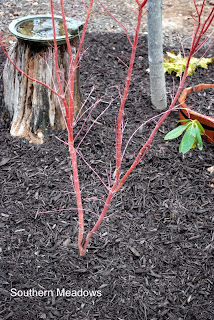 The Cherokee Brave Dogwood (Corrus florida) that we planted is native to the eastern U.S. It has pink blooms in mid-May and is considered one of the best red forms with its deep pink bracts that have a white center. The bracts are actually not part of the flower, the actual flower is the small central portion where the bracts join together.


In the fall red berries appear on the tree and the leaves turn deep red to burgundy. I can't wait! We planted this tree in the understory of some larger trees in the woodland garden. This will provide the partial-shade that it prefers but enough sun to allow for a nice show of blooms. A nice addition of this variety is that it tends to be more disease resistant to powdery mildew than some varieties.

Another variety of the Corrus florida that we purchased is the Cherokee Princess. This dogwood has very large white bracted flowers, up to 5" across, and blooms heavily every year.

I am so enamored with the Coral Bark maple 'Sango Kaku' (Acer palmatum) that we put in last fall that I wanted to get another one. 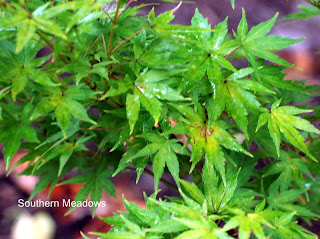 The photograph above is the foliage during the spring and summer months. In fall the leaves change to a butterscotch yellow (photograph below). 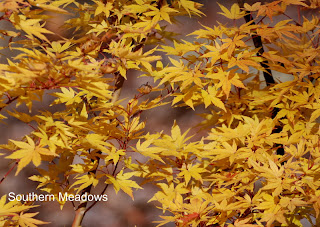 And then it transforms itself into this gorgeous coral. 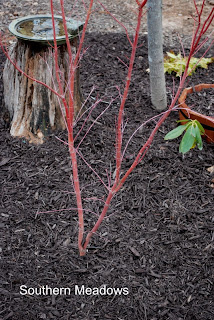 It is just an incredible tree all year.
According to the U.S. Department of Agriculture one acre of forest absorbs six tons of carbon dioxide and puts out four tons of oxygen. This is enough to meet the annual needs of 18 people. So when Arbor Day comes around in your neck of the woods why not plant a tree!
Labels: Arbor Day Cherokee Brave dogwood Cherokee Princess dogwood Sango kako shade trees