Sitting peacefully at the kitchen table enjoying my morning latte, I noticed a creature attached to the outside of the widow. This is not so out of the ordinary as the light from indoors often attracts insects to the doors and windows of the house at night, but this time the insect looked oddly shaped. Curiosity took the better of me, so half awake I took a closer look to discover a mating pair of oakworm moths.


It's not often that we get to see moths mating from this angle. This bug dork was totally geek out! After examining the moths from indoors I wanted see them from the other angle. The fact that it was pouring rain didn't deter me. So, still in my PJS and hurriedly covered in rain gear, I dashed outdoors to take a quick photo before my camera got too wet. 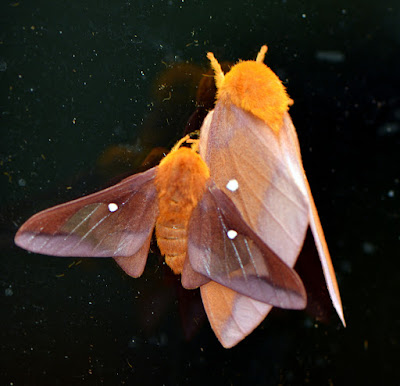 Now let's ignore my filthy windows shall we and just focus on this linked pair. Male oakworm moths fly around during the day making a buzzing sound like a bee to attract a mate, while the females broadcast their pheromone. The pair mate early in the morning and will remain attached for the day. At dusk the fertilized female will fly in search of a place to lay her eggs, usually on the underside of oak leaves.  Here in the South they will have at least two broods from May to September.

This couple hung out on the kitchen window until around mid-day when the female decided she wanted to move to another local. She began creeping along the window dragging her mate with her. He didn't appear to be all that enthused but didn't have much choice in the matter so went along for the crawl. Before she reached the window's edge she lost her grip and they both went toppling two stories down to the ground below, landing on a soft bed of leaves. 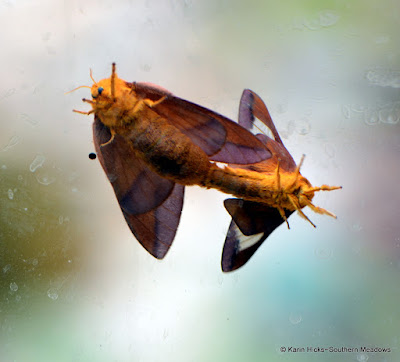 I dashed outside to ascertain their fate. Fortunately, they appeared unmoved. Still attached, she continued to drag him up the nearby retaining wall seemingly in total control of the situation until she brushed too close to a spiderweb, which quickly diverted her. She rapidly removed the webbing from her face and reversed direction. 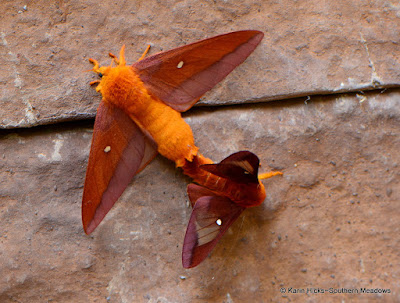 Eventually she settled on a place on the wall and there they stayed the remainder of the day. The male's translucent wings are really amazing. I was able to examine them closely while they were stationary, wings spread to their sides. Got me wondering, however, how he enjoyed hanging upside down all day long. 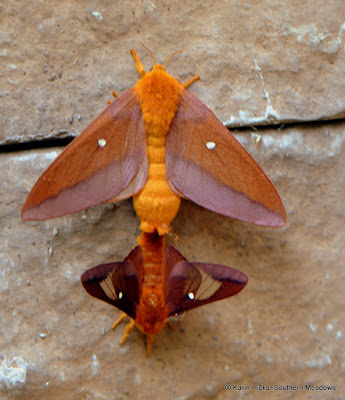 I checked on them periodically throughout the afternoon finding them in the same place on the wall every time. After supper I was expecting to observe them detach and fly off independently but was too late. They were both gone. I imagine she was in the nearby oak tree laying her eggs. Females will raft their eggs, placing several hundred in a single cluster.

This couples story ends here. It's unlikely we'll be able to spot any eggs on the vast number of leaves of our numerous tall oak trees. But I'm sure we'll see more of these moths as the summer lingers on.
Labels: mating oakworm moths oakworm moth pink moth