While we were working in the garden the other day, my son stumbled across an insect emerging from the ground that we had never seen before. It is always thrilling to find a new creature and a fun challenge to work out what it is. My initial reaction is always to grab my camera so that we have  a photo to study later, especially if the creature flies or crawls off or we missed (or forgot) something in our live observation. So here is the mystery insect.

It is slightly larger than the size of a hornet but has a black abdomen with clearly defined segments and an orange ring. Antennae are clubbed, has large eyes and clear wings. Observing the eyes is a clear giveaway that it is probably in the Diptera (Flies) order. I thought perhaps it was a species of robber fly I'd never seen before but the body shape wasn't quite right. We did some online research but weren't confident in our findings.

I put a photo out to the Insect Identification Facebook page to get some help. Bingo! It was identified as a Mydas Fly. The Mydidae Family are a small group of approximately 470 species of flies. After narrowing down the insect family, I wanted to see if the specific species could be confirmed so I submitted the photo on BugGuide and they validated that is was a Mydas clavatus. 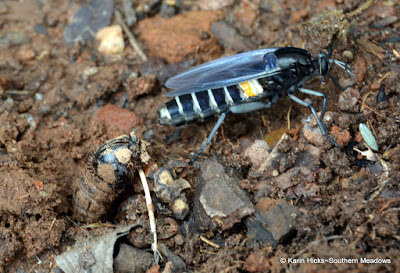 Apparently not much is known about the lifestyle of these flies. What we were able to research is that the females lay fertilized eggs in the ground near rotting or dead wood. Indeed, in our garden this happened close by an old stump. Here is a video on oviposition (credit: cotinis-Flikr) we found online.

The larvae eats other bugs it finds in the ground such as June Bug larvae (oh and maybe even Japanese beetle larvae...if only we could be so lucky!). The larvae pupate in small chambers created in the soil and emerge as flying adults. 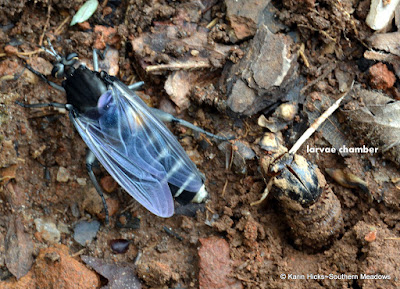 Look closely at the photo above and you can see that the Mydas Fly we stumbled upon had just emerged from its chamber in the soil. As the adult was acclimating to its new environment it remained very still, allowing us to study it. We also read later that they are reluctant to flee and slow to move if approached by a predator, which is what we experienced.

This is one of the largest flies found in North America and lives in many environments such as forests, meadows and open spaces. Adult Mydas flies visit flowers to consume nectar. The adults have also been presumed to be predaceous, like robber flies or horse flies, but there is no observational evidence to confirm this.

I think we can safely add this one to the beneficial insect list for our garden. Now, we'll be on the look out to see if we can spot this fly on our blooms around the garden.
Labels: beneficial insects fly emerging from chamber in ground Mydas clavatus Mydas Fly nectar seeking fly