Reflecting on the 2016 Garden

Welcome 2017! ~ I am super excited to embark on another year of garden goodness with so many ideas and thoughts dancing in my head. But before that journey begins looking back on the progress made last year is in order. It was a year of many highs and lows, which means it was a year of growth, learning, exploring and taking chances. As several of my fellow garden bloggers have done, I am reflecting on the year with one snapshot that sums up each month.


January is usually a quiet month for most gardeners, but here it was a perfect time to remove invasive plants from our newly purchased 4 acres. We spent our free weekends cutting down privet and tearing out Japanese honeysuckle making substantial headway in this effort. Observing the birds that are year-round residence or over wintering in our region was calling. I spotted a ruby crowned kinglet for the first time in our woods. Perhaps a sign that our habitat garden is attracting more diverse residence.
I spoke at Deaton Creek to a charming group of gardeners on habitat gardening. On the blog I wrote about the importance of wildlife trees in the ecosystem, poison ivy and it's role in a wildlife habitat and took a look at the beauty of the beach tree in the winter. I attended the Native Plant Symposium sponsored by the Garden Club of Georgia at the State Botanical Garden of Georgia.


The garden quietly began to awaken in February. Some winter wonders burst into bloom such as witch hazel, golden ragwort, and Carolina jessamine. Blueberry buds swelled and other non-native friendlies such as Edgeworthia chrysantha, hellebore, crocuses and a few early daffodils began to appear.
I presented to the Brenau University Garden Society (BUGS) on gardening for pollinators. On the blog I focused on backyard birding and yellow-bellied sapsucker feeding holes. I attended the Greater Greenville Master Gardener Symposium in South Carolina with fellow garden bloggers Janet Ledebuhr (Queen of Seaford), and Julie Adolf (Garden Delights).


The appearance of spring ephemerals in March transitioned us from winter into spring. Bloodroot was the first to brighten the blanket of leaf litter on the forest floor with its snowy white petals. With the blooms emerged the pollinators and we regularly saw butterflies and bees on bright sunny days. Leatherwood, redbuds, creeping phlox and quince put on a brilliant show. Devil's walking stick, hydrangeas, and hickory trees were photographed for a series on spring leaf emergence. On the blog, I took a close look at the pollinators that frequent the blueberry blooms and the value of our native blueberry bee.

April was azalea time and the woodland garden was alive with color. The leaf out of the canopy trees provided a fresh layer of green to the landscape. The ruby-throated hummingbirds arrived and established their territories. Song birds nested all over the garden. My boys and I had fun identifying nests from Carolina Chickadees, Eastern Phoebes, Eastern Bluebirds, Northern Mockingbirds, Carolina Wrens, Northern Cardinals, House Finches, and Barn Swallows. An unforgettable moment was when we witnessed a brood of Carolina Wren fledglings learning how to fly. The kitchen garden produced strawberries and other cool season crops were ready for harvest before prepping the beds for summer planting.


The book Gardening for Butterflies published by The Xerces Society was available and gifted to me by my friend Penny, who took several photos that appear in the book, some taken in my garden.
I took a 4-H trip to Tybee Island with my homeschooled boys where we learned about marsh ecology, sea turtles, marine invertebrates, and beach ecology. It was an incredible hands on educational experience.


May was simply splendid. Every part of the garden was dancing with colorful blooms. This month was abundant with perfect temperatures and good rainfall. We welcomed the friendly snakes as they emerged from hibernation.
I spoke to enthusiastic 4th and 5th graders at Sugar Hill Elementary School's Career Day on opportunities in the field of horticulture. A girls trip to Puerto Rico to celebrate my sister's 40th birthday was the highlight of the month. Despite the hype about zika virus we didn't see any mosquitoes on our adventures through the rain forest, the city, or on the beaches.
It was a busy month outside of gardening and the blog didn't get a lot of attention. I only wrote one post on the dark side of butterfly releases.


By the time June arrived we were rocking and rolling around here preparing for a garden tour in September. My boys were away at summer camp for a week giving me a full 7 days of nothing but gardening.
The much anticipated wildlife pond was installed. This was a project that we had contemplated for three years and finally got it done. 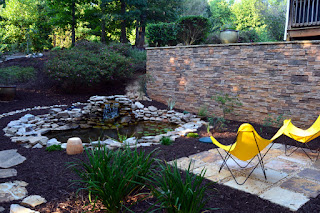 On the blog, we celebrated pollinators and their vital role in our ecosystems.


I was away much of July with a trip to Michigan to visit my sister, attending the Garden Blogger Fling in Minneapolis, MN and then rushing to North Carolina to attend to my mum, who surprised us all with a trip to the E.R. with a blocked artery. Thankfully she is in amazing health otherwise and was in and out and back to active life in no time.


August was hot, hot, hot but we persevered, sweating in the garden preparing for the fall garden tour. Plants saw record numbers of pollinators, caterpillars, and beneficial insects. I took loads of photos. On the blog I wrote about some of the  insects favorite blooms and how hummingbird feeders service other insects on more than a hummingbird feeder.

I presented to a great crowd at the Georgia Native Plant Society, Redbud Chapter on pollinators and beneficial insects  and their relationship with native plants.


September began the transition from the vibrant colors of summer to the beautiful golds, purples and oranges of fall. Seed pods began to form on buckeyes and milkweed and fruit developed on sumac, beauty berry, hearts-a-bustin and viburnum. In the kitchen garden we harvested figs, peppers, and herbs. A giant swallowtail butterfly visited the garden; the first we've had in a few years. Frogs discovered the pond and perched on the lily pads; counted up to 16 frogs.
I was an instructor for the Plants & Pollinators course for the Native Plant Certificate Program at the Georgia State Botanical Garden. What a fun group!
About 40 people from the Georgia Native Plant Society and the Native Plant Certificate Program attended the tour of Southern Meadows.

On one of my frequent trips to North Carolina, I attended the first annual Bee Better Garden Tour, and visited the garden of friend and author Helen Yoest from Gardening with Confidence. What a special treat that was!


October celebrated the 7th year of blogging! Reflecting on this profound journey with its humble beginnings as a way to document our garden for family, to an educational forum and connection to the global gardening world has been truly amazing. It has created meaningful friendships and allowed me to grow and flourish in extraordinary ways.

I spoke at the Spout Springs Library on the Hows and Whys of Creating a Pollinator Garden. On the blog, I focused on the berry worthy plants that support wildlife in our garden and the regal Georgia aster. I worked the inaugural Tree Day celebration at our local nature center to help promote native trees and their role in the backyard environment.
The effects of more than 90 days without any rain really began to show and the garden was looking very parched and even the most drought tolerant, established plants were stressed.


Wildfires broke out in several north Georgia locations as well as the Carolinas and Tennessee. These giant fires sent smoke and haze our direction. Much of the month of November was void of work in the garden because of code red alerts. Toward month's end we finally received some much needed rain!


December brought more rain and relief. Many of the birds returned to feast on the seeds thanks to the abundance of pollinators this summer. Garden chores were mostly moving leaf litter around to appropriate parts of the garden. Observing hawks was a favorite activity as we celebrated the winter solstice.
I attended the USC Upstate's Arbor Day event featuring David Culp with Janet Ledebuhr, Julie Adolf, Daricia McKnight (A Charlotte Garden) and Lisa Wagner (Natural Gardening).
A trip down to Charleston to celebrate our son's commencement from the College of Charleston was the beginning of a month of family gatherings and celebrations.

And that is a seasonal look at our garden for 2016. The new year is sure to bring more improvements and developments to our wildlife habitat. I hope you'll be along for the ride. Cheers to a another year of learning, living, and changing to make a difference in the world!
Labels: continuing education creating wildlife habitat Garden bloggers presentations reflecting on a year of gardening