We may not have gotten the snow fall that was predicted, but we did get freezing temperatures this weekend. I think we can officially say winter has arrived! Sunday morning was bitterly cold. Regardless, I dressed in 3 layers, a big winter coat, hat, gloves and scarf and waddled outside to photograph birds. On the path from the upper kitchen garden to the lower garden, where the ground is often exposed because of high foot traffic, I noticed needle ice had formed overnight.

This happens when there is a high moisture content in the ground (our rain on Friday night) and the soil temperature is above freezing (last week it was 70+ degrees), while the air temperature is below freezing (Hello 18 degrees!). 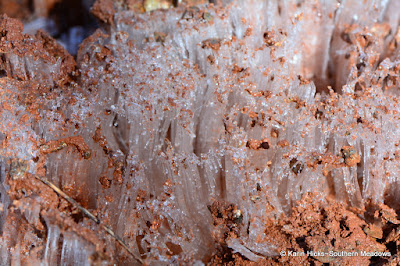 The subterranean moisture is brought to the surface through capillary action. Often the ice columns push away soil particles as they grow. The soil here is a silty clay which provides enough pore space to conduce water to the surface.

This has occurred in our garden in past years, but these perfect conditions don't always present themselves every year, so it is special when they materialize. 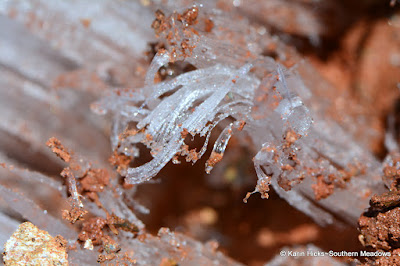 I really wanted to get down on the ground to look closely, not so easy when you're dressed for the polar regions. These ice crystals are really cool! My boys had an impromptu mini-science lesson as I seize these opportunities to teach. 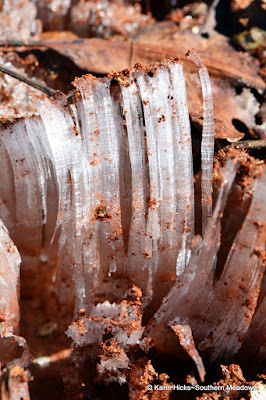 Carefully examining this unique marvel, reveals how the single needles meld together. If the air temperature stays cold enough they will continue to grow taller. These were only a few inches high at the surface and with temperatures climbing slightly above freeing today some of them began to collapse as the afternoon sun warmed us a little. 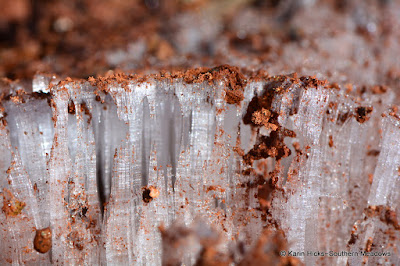 Similar phenomenons occur on plant stems called frost flowers, on dead wood referred to as hair ice and on small surface rocks then named pebble ice. You've probably experienced one or more of these ice crystal formations in your garden. No matter what the weather conditions are, it is worth getting out in the garden to explore. You never know what you will find!
Labels: diurnal freeze/thaw cycle frost pillars ice growing out of the ground needle ice winter 2017