Where have all the birds gone?

Activity at our bird feeders has been very slow. Sure there is the occasional chickadee or cardinal visiting but for the most part it has been very quiet. September and October are peak months for fall migrating birds such as Grosbeaks, Orioles and  Flycatchers who are headed to warmer climates for the winter. So why are our feeders absent of birds? 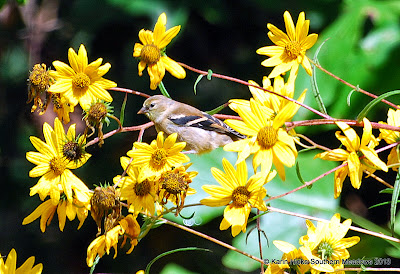 Because our wildlife garden is working!

This time of year there is so much natural food available like seeds, acorns, insects, berries and fruit that the birds don't need to bother with supplements. 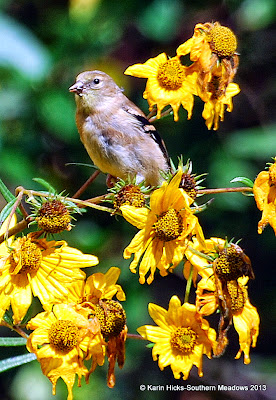 It is important not to tidy up your garden in the fall. Your spent flowers provide seeds for many birds. Flowers such as asters, sunflowers, coneflowers, black-eyed susans, coreopsis, cosmos, daisies, and goldenrod, joe-pye weed and ironweed are a few seed producers that attract birds. Leave the dead plant stalks too. You may be surprised what insects will live there over the winter. 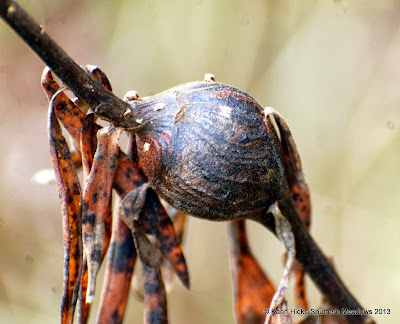 This is a gall found on the goldenrod which is made by the goldenrod gall fly. Downy woodpeckers and Carolina chickadees are two birds who will seek out these galls, break them open and make a meal of the larvae inside. There is also a beetle (Mordellistena unicolor) that will burrow into the gall to get to the larvae. And two types of parasitic wasp (Eurytomo gigantea & Eurystoma obtusiventris) which also prey on the goldenrod gall fly larvae. These wasps inject their eggs into the gall and when the eggs hatch the parasitic wasp larvae eats the gall fly larvae. These two species rely entirely on goldenrod for their survival.

At this time of year we must be careful while walking through our woodland garden. The white oak trees have begun their annual assault hurling acorns down at breakneck speed. And if there is a bit of wind, watch out! A bop on the head can leave quite the welt. We have lots of white and red oaks and their acorns support a wide variety of wildlife including blue jays, squirrels, chipmunks, flying squirrels, rabbits, raccoons and wild turkeys. Red oaks take two years to mature acorns which are high in fats and carbs. White oaks produce acorns on an annual cycle but are sporadic in their production...they can have light and bumper crops. White oak acorns contain fewer tannins, taste better and are the highest in carb content. These two trees compliment each other well in terms of supporting wildlife. 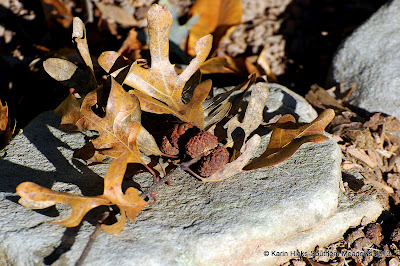 Sumac berries are packed with ascorbic acid (Vitamin C). I'm sure they boost the birds' immune system for the winter just like it does ours. These berries are long lasting and especially popular when other berry sources are long gone. We have several colonies of sumac growing around our garden. Recently, we had to take down a few sumac which were growing rather perilously but I didn't want to waste the berries so I added them to a grapevine wreath which I hung up for the birds to feast on. 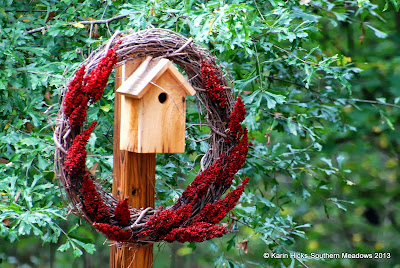 American beautyberry (Callicarpa americana) is one of my favorite shrubs for interesting berries. They support at least 10 different birds, including cardinals, mockingbirds, sparrows, bluebirds and woodpeckers. The berries have a high water content so they are particularly popular during dry periods. 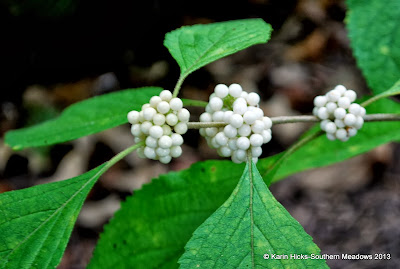 Hearts-a-Burstin (Euonymus americanus) is an inconspicuous shrub most of the year but moves into the spotlight in fall with its crazy seed capsules that burst open to reveal the seeds. The white tailed deer certainly like these but birds will visit them too. 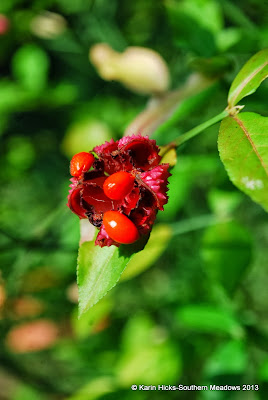 The dogwood trees are typically packed with fruit at this time of year, but because spring was wet and the sun was scarce the blooms were lackluster and the polinators were scarce. As we go into fall we are still feeling the effects of the unusual weather. Yet, a few berries have emerged which provide food for an array of birds including cardinals, tufted titmouse, eastern bluebirds, and american robins. Racoons, foxes, deer, chipmunks, squirrels and skunks will also feed on these berries. 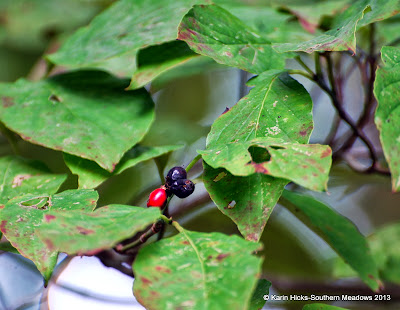 It won't be long before the temperatures plummet and the seeds and berries have been foraged and we will start to see more bird activity at feeders. But for now, we are enjoying watching bird behaviors in their natural habitat and making notes about which shrubs, perennials and trees we want to add to support more birds and wildlife.
Labels: American Goldfinch beautyberry birds not visiting feeders dogwood berry goldenrod gall hearts-a-bustin natural sources of food for birds oak tree acorns sumac berries Swamp Sunflower wildlife garden