Green roofs have been trendy for sometime now. I have seen a number of living roofs on public and private buildings over the last few years but never on such a scale as the one at Ford's Rouge plant in Dearborn, Michigan. 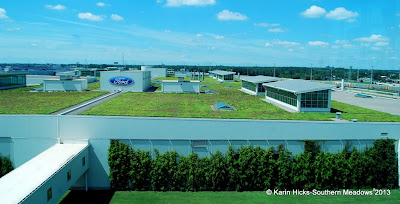 The 454,000 square foot roof, roughly the size of 10 regulation size basketball courts, was turned into a 10.4 acre garden. This is the world's largest living roof. The plant underwent a green makeover in 2004 but the primary function of the installation of this green roof was to manage storm runoff. Not only does it collect rainfall but it also helps lower the temperature inside the building by up to 10 degrees. It absorbs up to 4 million gallons of rainwater a year while converting carbon dioxide into oxygen. 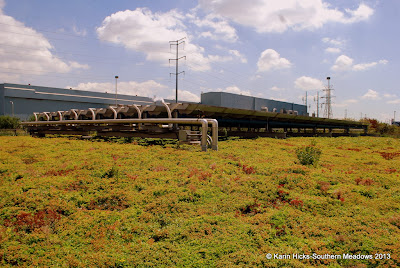 The roof is covered in several varieties of sedum. Drought and freeze resistance was a major concern when choosing the plant material. Density of growth and weed control were also considerations. The sedum is planted on a thin 4-layer mat. The first layer contains shale, sand, peat, compost and dolomite for the sedum to grow in. The second layer is made of mineral wool fleece which absorbs water and nourishes the plants. The drainage layer carries excess water off the roof and the waterproof, root resistant membrane protects the roof. Even when soaked with water this vegetation weighs less than 15 pounds per square foot.

One of the many benefits of this living roof is that it prevents extreme temperature fluctuations (summer temps have been as high as 150 degrees) that affect standard roofs. This is expected to double the life of the membrane roof below the green layers. 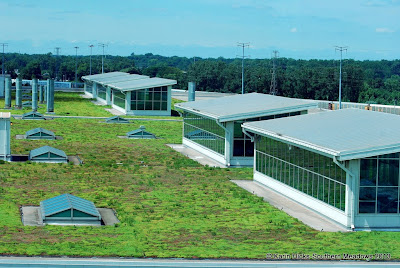 One of the challenges for such a large roof is the weight factor. Several have been done in the U.S. but they are very heavy. So the architects looked for solutions to this problem and found an example in East Germany where one had been developed for aircraft hangers as cheap camouflage during the Cold War. From this example the designing began. The beauty of their innovation was that the system only cost $13 million compared to a conventional engineering solution which would have cost between $30-48 million. 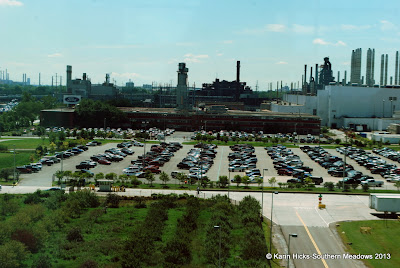 Next to the plant is a 16+ acre employee parking lot which is made of porous pavement. This allows rain and snow to seep through the pavement and into underground rock storage basins where it is filtered. The water then flows to nearby swales and natural treatment wetlands for additional filtering before entering the Rouge watershed. It takes 3 days for the water to get to the river now as opposed to 10 minutes under the conventional storm water run-off system.

In the lower left hand corner of the photo above you can see an orchard of fruit trees. There are several beehives in the orchard which house bees to help pollinate the trees. The honey made by the bees is available for sale. 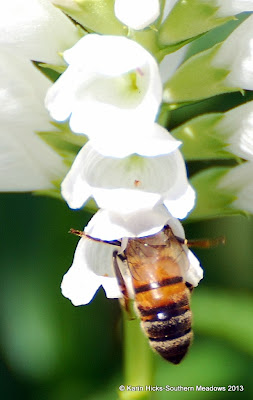 In addition to the human benefits to green-scaping this industrial area it also now provides habitat for birds and insects. According to the docent, birds started nesting within 5 days of the living roof installation. Some of the animals that are seen here are dragonflies, bees, moths, spider wasp, monarch butterflies, bumblebees, killdeer, barn swallows, peregrine falcon, mallards, Canada geese, and robins. 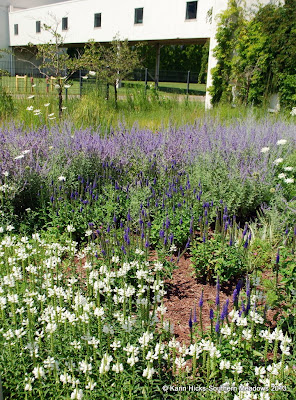 There are also landscaped areas around the plant which include white coneflower, Russian sage, wild grasses, Queen Anne's Lace, American cranberry and cattails.

This green roof system and surrounding plants and watershed makes for a refreshing site among all the gray of the industrial complex and gives new life to this area.


The photos, with the exception of the last two, were taken from the 80 foot high observation room which provides a good view of the Rouge complex and the living roof.
Labels: living roof sustainable design The Ford Rouge plant world's largest living roof