A Look at Cotswold Cottage

We are in Michigan visiting family and this week took a walk back in history at The Henry Ford in Dearborn, Michigan... 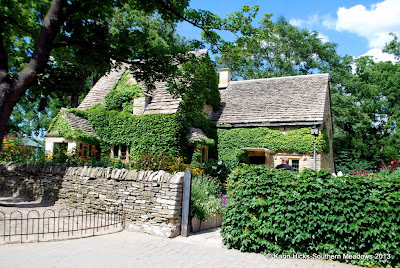 Cotswold Cottage is one of the many historic homes found at Greenfield Village. It was originally built in the 1620's in Chedworth, Gloucestershire in the Cotswold Hills of southwestern England. Henry Ford purchased the cottage, barn, dovecote, forge and fences for $5,000 in 1929. The structures were dismantled; each stone labeled individually, and then packed and shipped to America and reassembled in Michigan.


This was my favorite of all the historic homes. It is warm and welcoming and very picturesque. 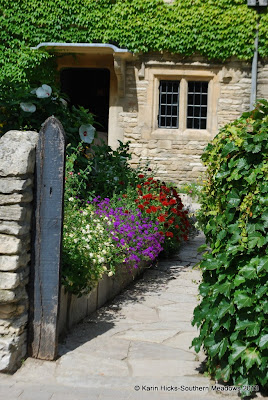 The walled flower garden is typical of Victorian gardens. The ideology of the late Victorian era required less maintenance and more natural growth instead of manicured features. Exotics were most popular during the era of colonization. Azalea, hydrangea, peony, hosta, delphinium, aster, lavender, and yarrow are some of the commonly planted perennials. 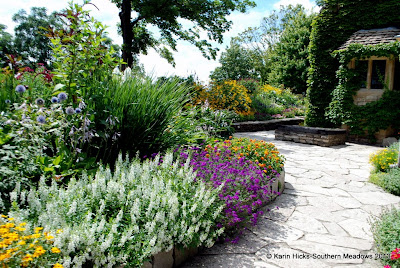 Filled with happy plants and lots of color. All shades of red, purple, yellow, orange, blue and pink all together work in this garden. 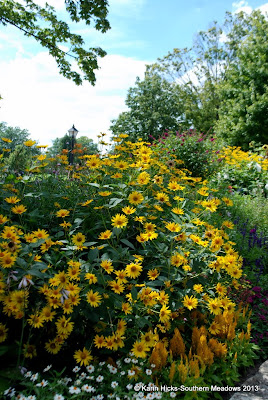 This view looks out toward the barn and dovecote. The dovecote was used to house pigeons or doves. Dovecotes generally contained holes for the birds to nest. Historically, pigeons and dove were an important food source in Western Europe and were kept for eggs, meat and manure. Apparently the manure would fetch a nice price and was used in the tanning of leather. I wonder if they used it in their gardens too. 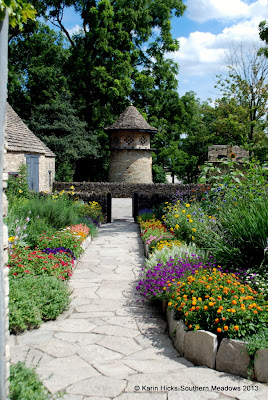 Clara Ford, the wife of Henry Ford, loved cottage style gardens and was President of the Women's National Farm & Garden Association for many years. 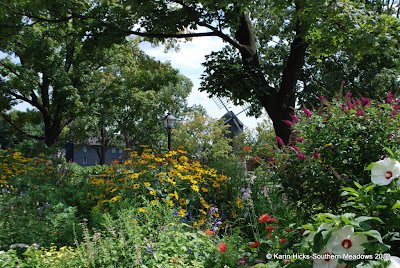 This cottage was built during the first waves of English immigration to the colonies. Limestone was an abundant resource in England and many of the modest homes found in the country were built out of this stone. (If you look at the photo above you can see the Farris Windmill built in the 1600's and said to be the oldest windmill in the United States.) 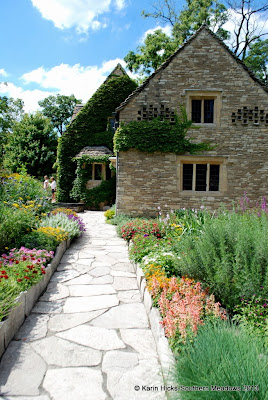 Look closely at the wall on this side of the house and you can see niches for birds to nest. The roof tiles are all crafted from limestone and the gutter and downspouts are very ornamental. 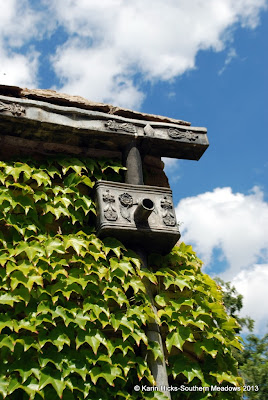 This building style became a favorite architectural model in America in the 1920's & 30's, especially for homes of the wealthy. 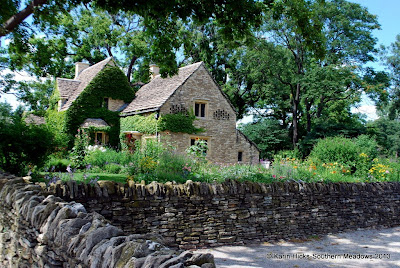