We've had a nice long SPRING here at Southern Meadows! On average temperatures have been 10+ degrees below average and we've experienced record spring rainfall. This has been fabulous for the plants and this gardener. So what did I learn this spring? I am joining Plant Postings for "Lessons Learned" and sharing some of my new discoveries in the garden.


The Downside of Cool & Wet

One of the casualties of this cooler, wetter weather are the butterflies. We have had significantly fewer butterflies fluttering around the garden. You may remember a photo I posted last year of 22 black swallowtail caterpillars on just one bronze fennel plant. This year we've had just one. 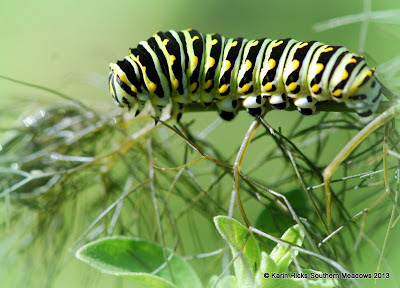 I've learned that nature makes "mistakes" too. These mistakes are called mutations and have a genetic basis that are sometimes passed on to future generations. Those mutations that provide favorable adaptation can be incorporated over time into most of the species and non-adaptive mutations are typically eliminated from the population. One of these interesting "mistakes" is known as fasciated. It is usually the result of a growing point changing from a round dome of cells into a crescent shape. This results in a growth with a flat stem. It is known to happen in over 100 vascular plant species. Woody plants, annuals and even cacti are affected.


This fasciated foxglove is growing at the educational garden where I teach. You can see the leaves and flowers look like a fan. Scientists aren't really sure what causes fasciation but they think hormones play a part. Gee, you mean plants suffer from hormonal issues too! 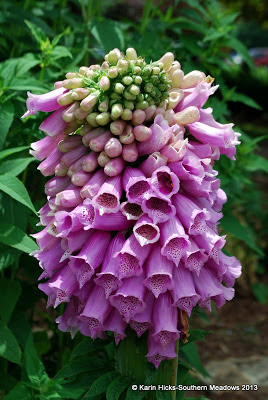 Apparently, fasciation is pretty common in foxgloves. And, interestingly, perennials that exhibit this mutation one year will be normal the next.

The Good, The Bad, and The Ugly: Lady Beetles

Every organic gardener knows that lady beetles are a gardener's best friend and they do their best to attract them to his/her garden to help control other insects that can be destructive to plants in large populations. Lady beetles help keep aphid and spider mite populations in check.

In 1916 Asian lady beetles were introduced as a natural pest control in greenhouses. Of course they escaped and spread uncontrollably across the U.S. Until recently scientists didn't really know why the non-native lady beetle was such a successful conqueror.  A new study published in Science found that the Asian lady beetle is very aggressive attacking the larvae and eggs of butterflies and native lady beetles. The study also discovered that the Asian beetles contain high concentrations of a fungal parasite called microsporidia. If a native lady beetle eats the larvae or eggs of an Asian beetle this parasite, which lays dormant in the non-native bug, is activated. It begins to penetrate the new host's cells and continues to replicate until the parasite has killed the host. Very bad news! 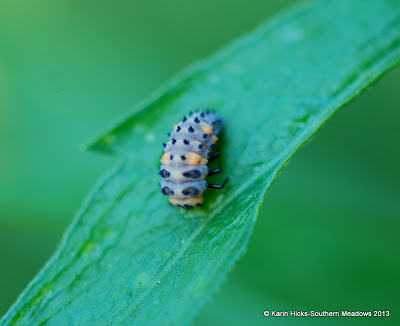 So how does one control the Asian lady beetles in their garden? For starters, I am learning to identify the various types of lady beetles. I have found this site very helpful: Natural History Museum of LA-Identifying Ladybugs. Another helpful guide is here where you can enter characteristics and it will search results. But what is the next step?

Please do join Plant Postings and share any lessons you learned in your garden this spring. Next, I will be joining Gardens Eye View for a look forward to summer in Seasonal Celebrations.
Labels: fasciated foxglove good and bad lady beetles Lessons Learned scientific study on invasive lady beetles Spring 2013