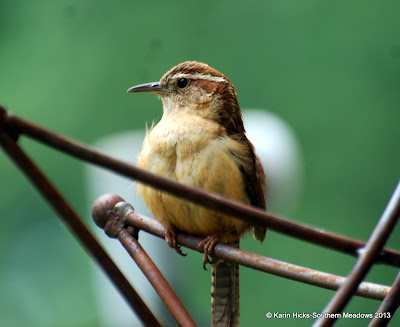 Remember this handsome guy? I included a photo of him in my Seasonal Celebrations post earlier this month. He sings to me each morning near the kitchen window. Well, he isn't really singing to me. He is crooning to his lady love. This little bird can belt out an amazing number of decibels for his size. His loud teakettle-teakettle song is unmistakable. 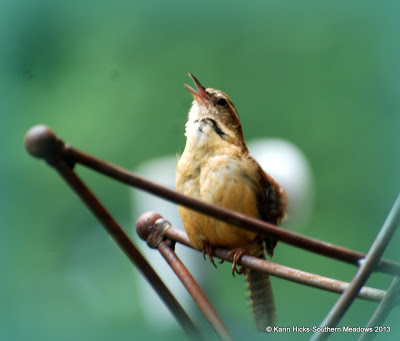 All his serenading seems to have worked because the lady has been busy building a nest. But not in one of the many nesting boxes around the garden. No, she thought one of the pots along the walkway would be a much better spot. And when I peaked in there yesterday I found.... three eggs! And, today there were four! But, I didn't dare take a photo and over extend my viewing welcome. Plus the nest is tucked in amongst the sweet potato vine and has a very small opening and I didn't want disturb it. While she is sitting on the eggs, Mr. Wren is constantly singing. Defending his territory. Its a guy thing. No really, the male sings 3-11 times per minute! And here is a cool fact, a captive Carolina Wren reportedly sang 3,000 times in one day. Now, that requires some strong vocal cords and endurance! 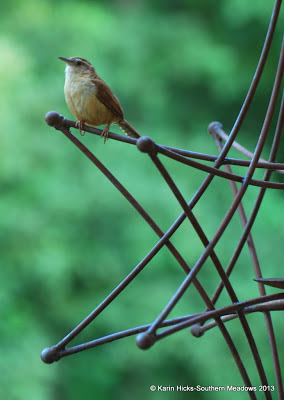 This candelabra is one of his favorite places to perch and sing. Unfortunately, the only way for me to photograph him is through the kitchen door so the quality of the shots aren't terrific. I tried keeping the door open but he flew into the house a few times so now it must stay closed. 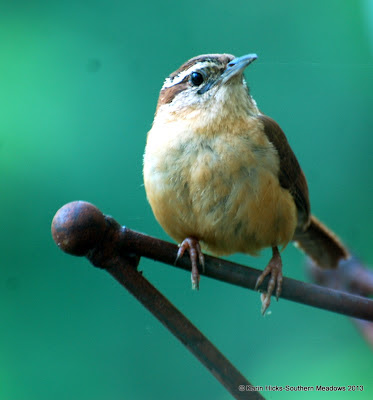 Carolina Wren's are found year-round in the Southeast but have been expanding their range, especially during warmer winters. They are dwellers of dense vegetation and my experience is that during nesting season they prefer human made spots such as boots & shoes, bins in the garage, pots, windowsills and mailboxes. A nesting pair can produce several broods a year and are monogamous and will stay together for year.