Last week I made an exciting discovery in my garden. In amongst the leaves at the edge of the woodland garden is a colony of crane-fly orchid (Tipularia discolor). 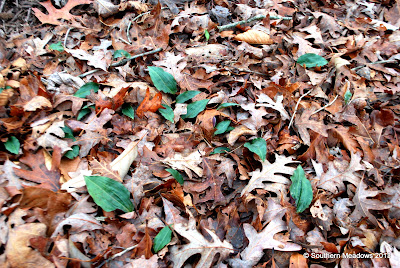 The crane-fly orchid is most noticeable in winter with its very distinctive leaf which is green above; sometimes with raised purple spots, 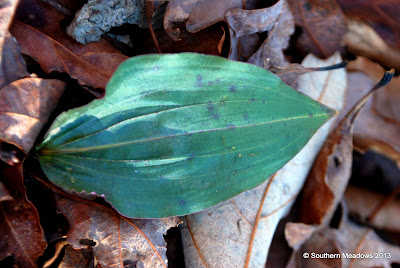 and purple below. The single leaf appears in late fall and remains throughout the winter absorbing sunlight. 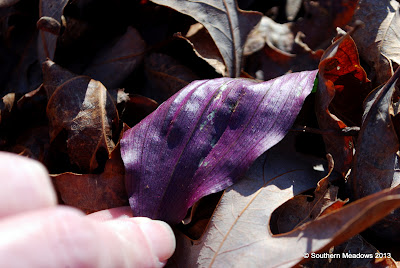 In spring the leaf withers away and nothing more is seen of this plant until its flower stalk emerges in summer.  The cool thing about the bloom is that it is pollinated by noctuid moths. The flowers have pollinaria which is a specialized structure containing pollen (characteristic of plants such as orchids and many species of milkweed). The pollinaria attaches to the moths eyes and they then pollinate the blooms as they visit them.

The crane-fly orchid is a terrestrial perennial (and only member of the Tipularia genus found in North America) found scattered throughout the Southeast. They like moist humus rich soils of deciduous forests and the acid soils of oak-pine forests. They can be found as far North as Pennsylvania and West to Texas. Click here to see its native range. Within its distribution range it is listed as Threatened in Florida and Michigan; Endangered in New York and Massachusetts; and Rare in Pennsylvania. This is mostly due to deforestation and displacement by exotic species.

Terrestrial orchids don't transplant well because they have a complex relationship with fungus. The fungal fibers in the soil enter the roots of the orchid to give it food. If the orchids are dug up and the fungus dies (which usually happens when they are dug up) the orchid looses its food source and eventually starves to death.

Walking around the garden I found three colonies of crane-fly orchids. I have marked the spots where this plant has come up so that I can be sure to observe the blooms in July. Stay tuned, hopefully I will have photos of the blooms to show you in the summer!