Rescued Birds of Prey ~ Their Stories

Still in Michigan...we took a day trip to the Kellogg Bird Sanctuary and what an amazing place! This 180-acre refuge offers a diverse wildlife habitat situated on a scenic 40-acre lake.

There are a number of rescued Birds of Prey at the Sanctuary that demonstrate different species of native raptors and I wanted to share their stories.


Note: photos were all taken through the cage screen so I apologize for the lack of clarity.


Barn Owls have not been seen nesting in Michigan since 1983! This male was found as a hatch year bird in 2006 in Florida with an injured right wing. Despite being treated he is unable to fly and therefore unable to hunt successfully in the wild.


These red tailed hawks are both female but their age is unknown. They both have wing injuries and are unable to survive in the wild. The one with the darker patterns has been trained to stand on a glove and is used for educational programs at the Sanctuary.


These Great Horned Owls were brought to the Sanctuary in 2008 from the Michigan State Veterinary clinic after their wing injuries were treated. Their age is unknown but it is presumed that they are both female based on their larger size. Males are usually smaller in weight and size. 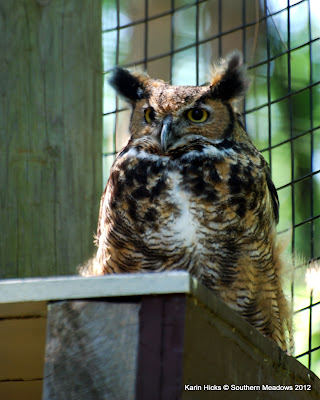 Fun fact: Great Horned Owls are the only predators to hunt skunks!


This Eastern Screech Owl was checking me out. Can you see him looking out the corner of his eye? This little guy was found in 2006 as an immature bird in Vicksburg, Michigan. He has a right wing injury and the tip of the wing had to be amputated. He has learned how to get around without two full wings and word has it that he can sometimes be seen peaking out of his box.

Did you know that Screech Owls don't add any nesting materials to their nests but roost and lay eggs in nest boxes or tree cavities?

This male Barred Owl was found as a hatch year bird in Indiana in 2009. He was on the side of the road with a stick in his left eye. A wildlife rehabilitator treated his injury but he remains blind in one eye making it impossible for him to be a night hunter in the wild.

Birds of Prey are heralded hunters and powerful birds and very often thought to be invulnerable. The stories above show that they are at risk too and their biggest threat are humans. Car accidents are the leading cause of injury and death of these birds. Birds of Prey often hunt along road sides and are struck when they fly by. Birds such as vultures and eagles that feed on carrion are frequently hit by cars when they are feeding on road kill and are too gorged to fly away quickly.

Wind farms are thought of as a clean source of renewable energy however they have a high environmental cost when it comes to bird fatalities. Many wind farms are located on migratory flyways and prime flight corridors for raptors. These birds are often struck by the spinning blades.

All Terrain Vehicles often destroy nests of ground nesting birds. They also damage habitats of the mammals that are their primary food source and without sufficient food and nesting sites the populations of these raptors dwindle.

Pesticides and herbicides used on crops and to control rodent populations are lethal to these birds over time. Habitat loss also impacts their populations since birds of prey require large territories for successful hunting and nesting.
Labels: Birds of Prey Birds of Prey threat Kellogg Bird Sanctuary rescue