It is not the strongest of the species that survives, nor the most intelligent that survives.
It is the one that is most adaptable to change.
~ Charles Darwin 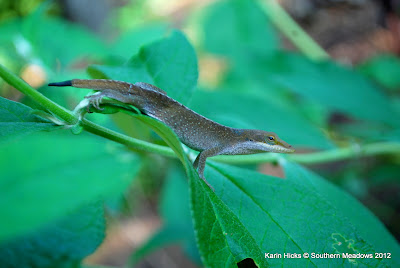 Look closely and you can see that this Anole has lost part of its tail. The tail is designed to separate from the body when attacked by a predator allowing the Anole to escape while the predator eats the tail. Replacement tails grow back in a few months. The downside of this survival technique is that lizards that loose their tails have a more difficult time establishing or maintaining dominance over a territory and lizards are highly territorial.

Anoles are also capable of changing color based on their mood or surroundings. Often they will turn from green to brown when they are stressed. I'd say loosing one's tail is a good reason for being stressed!
Labels: anole survival skills