If you live in the South or have ever visited the Southeastern part of the United States you are probably familiar with Kudzu. It is a vine that was introduced for erosion control. The problem is that it grows too well. In fact it can grow up to 1 foot a day during the summer months. For that reason it is often referred to as "the vine that ate the South". 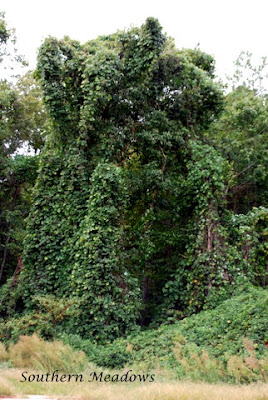 Kudzu growing up trees
It is seen growing along roadsides all over the southeast smothering and suffocating trees, power lines, buildings, native plants and anything that stands in its way. It is very difficult to kill and according to the University of Auburn (Alabama) herbicides are not very effective and can take up to 10 years to kill. 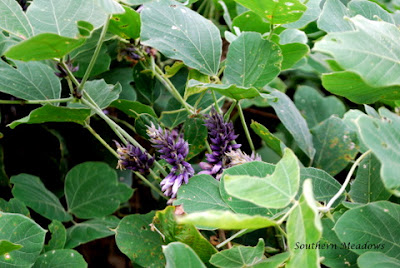 Kudzu blooms are fragrant and can be used to make jelly. They will form seed pods
This vine was brought over from China and introduced to the South in 1883 where it grows better than in its native land. It wasn't until 1953 that the government removed it from its list of recommended plants and in 1970 it was listed as a weed. It currently covers more than 7 million acres of the Southeast! The problem as with any imported product is that the natural enemies don't come along with it.
Well, until recently.
According to the University of Georgia, the Kudzu Bug (Megacopta cribrari) was first discovered in Georgia in 2009.  Researchers are still trying to discover how the bug got here. Like Kudzu, it is also native to China and India. 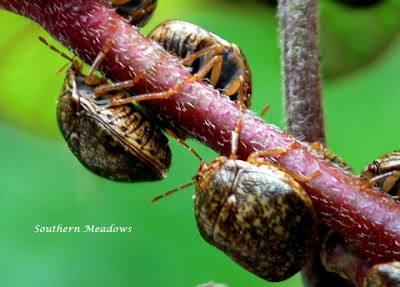 So you may be wondering why I am giving you all this background on Kudzu and the Kudzu bug. Well, look what I found on my Hyacinth Bean vine. Ah yes, none other than the infamous kudzu bug! 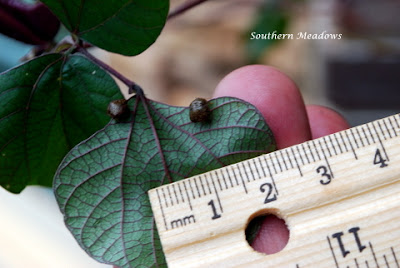 These bugs are about 3-5 mm long with a hump very much like a ladybug. They have needle like mouth parts that suck the moisture out of the stems, sap, petioles and leaves making them looked scorched. The Kudzu Bug is a type of stink bug which emits a very strong, unpleasant odor when threatened. 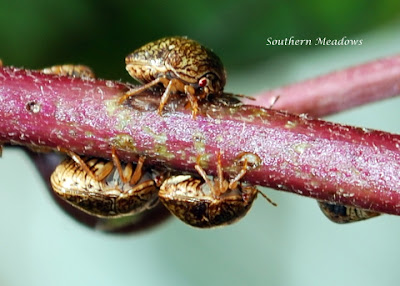 These bugs not only feed on Kudzu but legume crops including soybeans, Lima beans, kidney beans,and green beans. A nuisance to homeowners this has even more worrisome implications for agriculture. You can see how many bugs populate just a small part of my hyacinth bean vine. One can only imagine how many would be on a soybean seedling. 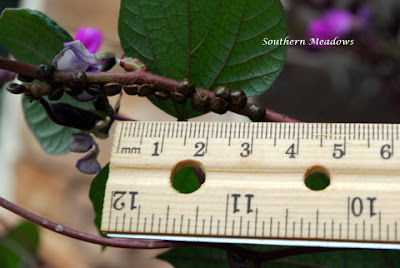 As temperatures begin to drop and the kudzu leaves are killed off by frost the adult bugs look for places to overwinter. They are often seen crawling by the thousands on light colored houses and find their way into homes through small openings around windows and doors.
In the garden they can be controlled using organic insecticides such as insecticidal soap, horticultural oil or spinosad. Multiple applications may be needed.
This bug is spreading to other states. Reports of this bug have been confirmed in South Carolina, North Carolina, Alabama and Tennessee. Any sighting of this invasive species should be reported to the state department of agriculture. There are no natural enemies!
Labels: Kudzu Kudzu Bug Megacopta cribraria