When you garden in the South one must always be mindful of certain insects that can be harmful to humans and pets. Georgia is home to three venomous spiders...the brown recluse, northern black widow and the southern black widow.
This weekend my husband was moving some stack stone rocks to create a new pathway through the side garden. He was about to pick up this rock when he saw this beauty. 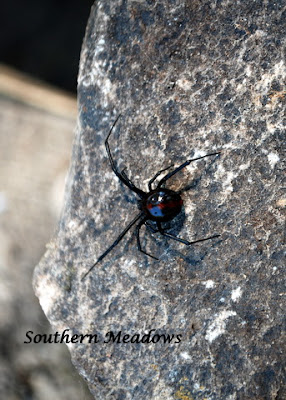 Black widow spiders are the largest of the cobweb weaver spiders. They are very common in nature and like dark, small spaces and are often found between rocks, log piles, in dark sheltered spots like the corners of your mailbox or in your propane meter tank. 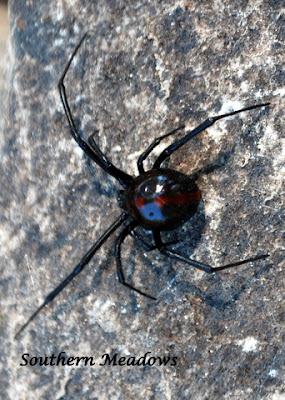 The female is shiny black or brown-black and sometimes has a row of red spots on top of her abdomen. She has a red hour glass on her underside (which I didn't get a photo of) and is venomous. The females can grow to be 1 1/2" long with its legs extended and this one is certainly that big. The male spider has red spots on its abdomen with white lines radiating out to the sides. The male is NOT venomous. 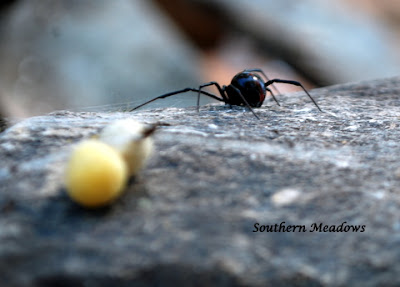 They belong to the genus Latrodectus which in Greek means "biting in secret". They really only bite in self defense when they accidentally come in contact with humans. Most bites feel like a pin prick which are the spiders fangs injecting a very small amount of highly toxic venom. If you are bitten you will know immediately. The venom works quickly...you will get bad cramps, followed by breathing problems, a high fever and then great pain. A black widow's venom is fifteen times more potent than a rattlesnake. The southern black widow is reported to have the most severe bite. It usually isn't deadly if medical attention is received immediately. 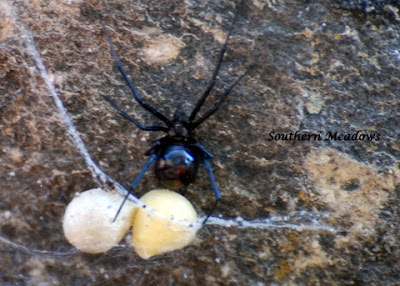 The female spider will mature in about 90 days and live another 180 days. She will lay somewhere around 9 egg sacks in one summer. Each egg sack can contain between 400-900 eggs. They incubate for 20 to 30 days. Like praying mantis, usually only a few survive due to cannibalism. This mother had two egg sacks she was trying to protect.

Black widows typically eat other insects, their favorite being mud-dauber wasps. But they also have enemies. Some parasitic wasps will sting and paralyze the black widow. It is also a favorite of the Praying Mantis.

Fortunately my husband saw this spider before he picked up the rock and was good enough to call me to grab my camera. He knows me too well.