April was a tumultuous month. Not only was it an unprecedented month working from home, but a number of storms travelled through our region dumping lots of rain, high winds and tornadoes. My recurring garden chore (in addition to weeding) has been picking up limbs from the woodland garden. Who knew there were so many dead branches up in the tree canopy? The good thing is that the wildlife brush piles are getting replenished.

Our garden is in its third wave of spring blooms. One of my goals in developing our garden was to have new blooms emerge as others fade so that we are constantly supporting pollinators through and within the seasons. 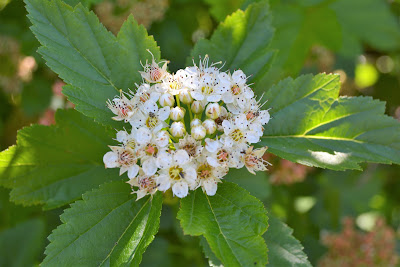 One of my favorite spring blooming shrubs in Ninebark (Physocarpus opulifolius). This shrub begins to brighten the garden with its bunches of white blooms when the rush of spring ephemerals is over. 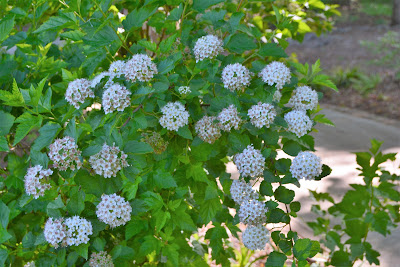 The vibrant blooms grow on the shrub's arching limbs. I love its free branching form. No serious pruning required, which is a box checked on my list of positive traits. 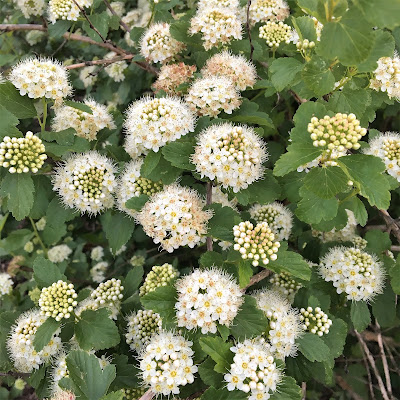 We've incorporated this spectacular shrub in several areas; in the wildlife hedgerow along the driveway, on the slope leading to our pond and two beds in the back garden. Not only is Ninebark an attractive shrub that supports pollinators, but it is great at erosion control in our sloped gardens. It grows really well in acidic soil, but will also tolerate clay, rocky and dry soils. We grow it in full sun and part [morning] sun situations and it performs consistently in both. 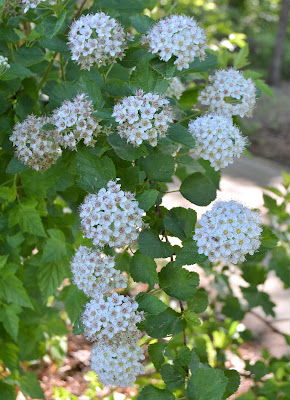 The other day, I found this red-spotted purple butterfly sipping nectar from the blooms. This butterfly is more often found on scat or rotting fruit so I was surprised to see it visiting flowers; albeit, the books say these butterflies will visit flowers, it was a first time experience for me. 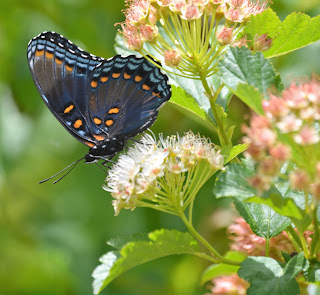 The flowers bloom for a few weeks and then begin to transition from white to a stunning dark pink as the fruits begin to develop. I can't decide which form I prefer. They are both striking. 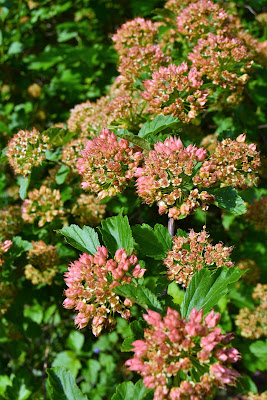 When the evening light hits the forming seed capsules, still standing upright on the free flowing branches, the color is magnificent. 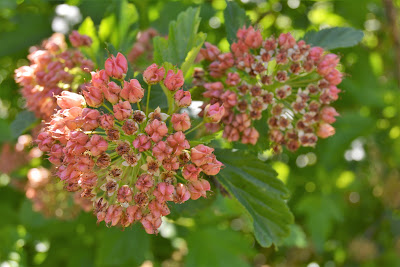 The different tones add a wonderful play of color to the garden. Depending on the time of day and the angle of the light, the hues range from rosy pink to coppery bronze. 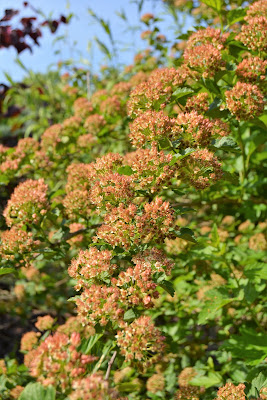 As the fruit forms the entire bloom begins to cascade downward. 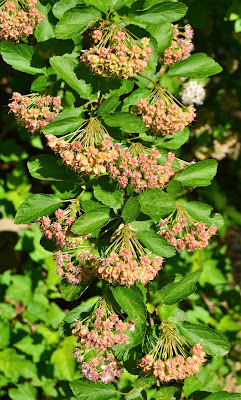 Typically the botanical epithet given to a plant describes what you can expect from that plant. For physocarpus opulifolius, physa = bladder and karpon = a fruit. You can see that play out in the forming fruit below. 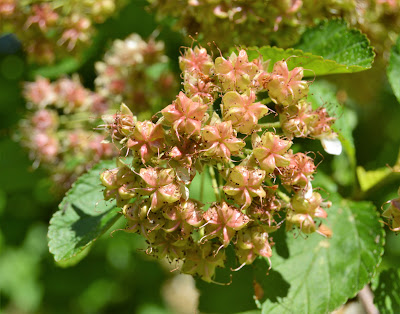 Seed pods persist through the fall providing good color in the garden and food for birds. In winter, when the shrub is dormant, one can appreciate the pealing bark. 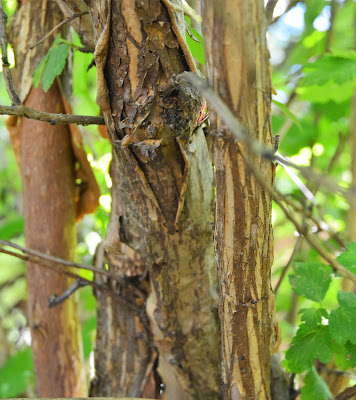 Ninebark gets its common name from the exfoliating bark. The bark layers peal off to reveal a lighter layer. The peeling bark isn't a particular selling point for me. It isn't as bold as say River birch or Sycamore trees, but it does add some winter interest once the leaves have fallen. 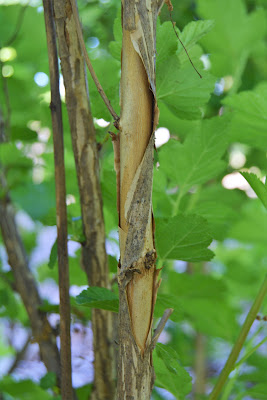 I've read that in some landscapes this shrub is pruned down to the ground every year. I've never felt the need to do this with our shrubs. I'm not sure the purpose of this practice other than controlling height and in our garden this isn't an issue. Right plant, right place. If it is pruned to the ground you will miss out on the peeling bark on the mature branches. 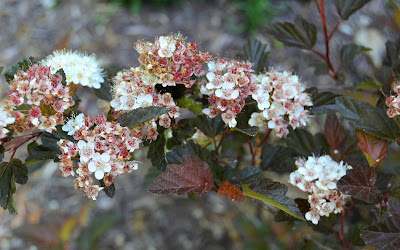 In addition to the straight species there are cultivars that provide different foliage colors. We planted Ninebark 'Coppertina' to add purple foliage in a garden bed to serve as an accent plant. It echoes the dark tones on the weeping redbud 'Ruby Falls' at the lower end of this garden bed. 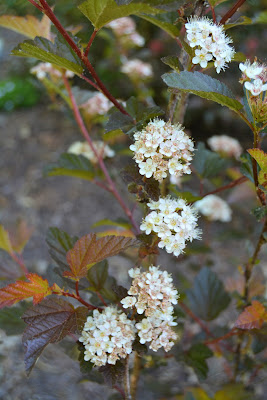 This cultivar provides a rainbow of purple and bronze foliage. New growth emerges orange and deepens as it matures. 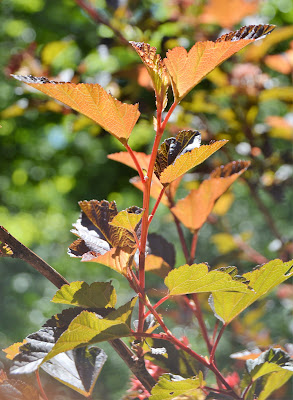 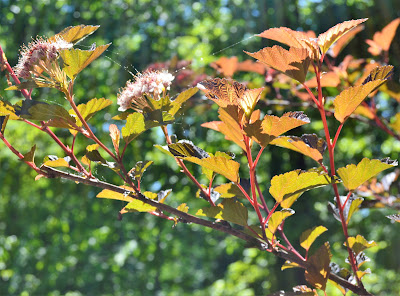 A dwarf cultivar 'tiny wine' with dark bronze foliage is another option if you need a smaller shrub and don't want to control larger shrubs with annual pruning. The deep foliage is attractive in the right setting. 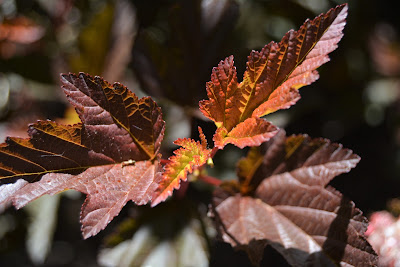 Note on Cultivars:
There is much discussion on using cultivars in a garden to support pollinators. Cultivars (aka nativars) are plants changed from native plant species for different characteristics such as leaf color, habit, disease resistance, fruit size, among others. Unfortunately, often times cultivars are the only option available in nurseries. Different scientific studies have been conducted by Emily Baisden and Doug Tallamy (University of Delaware) and Annie White (University of Vermont). Their findings on how well native species vs. native cultivars support pollinators varied by plant species. "Some native cultivars attract just as many insect pollinators as the native species (mostly on open pollinated seed cultivars." However, the more manipulated the cultivar the less attractive to pollinators. The take away is that when you are "evaluating native cultivars for use in a pollinator/habitat garden, try to limit the use of cultivars to open-pollinated, seed grown selections of the native species". Cultivars should not be used in habitat restoration because they don't provide the genetic diversity for ecological biodiversity. I suggest you read the studies in the links provided to decide on the use of cultivars in your garden. Here is another good resource.

Example:
Ninebark 'Coppertina' is an open pollinated cross between Physocarpus 'Dart's Gold' (seed parent) and 'Monlo' aka 'Diablo' (pollen parent); created for its foliage. In our garden we have found reseeders that are growing below the Coppertina that have green foliage, probably reverting back to seed parent (Dart's Gold) plant.

One final note: In addition to the benefit of genetic diversity, I do find the straight species a much more attractive shrub overall. My observations are that the blooms on Physocarpus opulifolius are visited more frequently than its cultivars and in general it is more free forming than the cultivars that have a more upright form.