Spring is mating / nesting season for many song birds. We are seeing a lot of bluebirds, cardinals, wrens, mockingbirds, hummingbirds, thrashers and many other birds nesting in our garden. It is an exciting time to see another generation being raised here, but this also means birds are defending territories, protecting nests from predators, and causing ruckus. Let's just say there can be some drama.

This weekend a pair of brown thrashers put on quite a performance. The brown thrasher is the state bird of Georgia and considered common in our area. We have observed them in our garden periodically over the past few years, usually thrashing around the ground in search of food. This year we have seen much more activity from these birds. 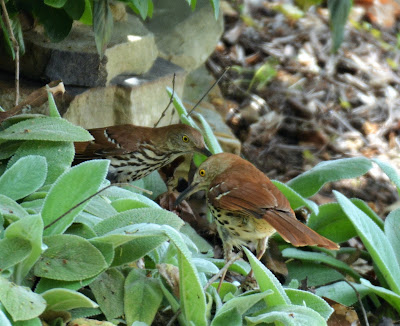 Several years ago we created a wildlife hedgerow above a retaining wall that runs the length of our driveway. This garden is planted out with trees, shrubs, perennials, grasses and ground covers. It is a good habitat for birds and pollinators as it provides shelter, nesting places, and food sources. This brown thrasher pair was kicking up leaves in the lambs ear that grows around a viburnum shrub in this hedgerow. Was this courtship behavior or a domestic dispute we were witnessing? It appeared cordial at first but quickly changed to a powerful performance. 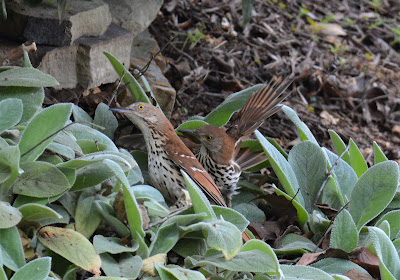 First one extended its wings. 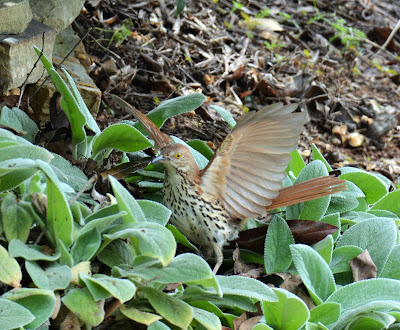 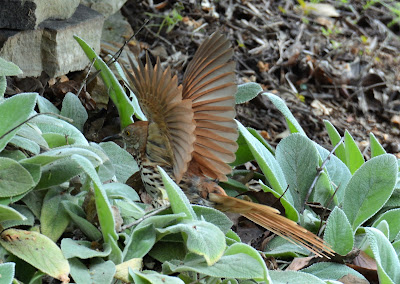 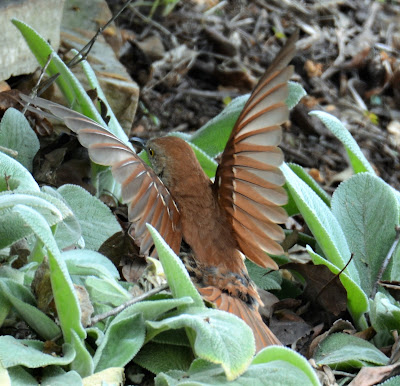 Clearly they were not happy with one another. But I was very impressed with their gorgeous feathers. 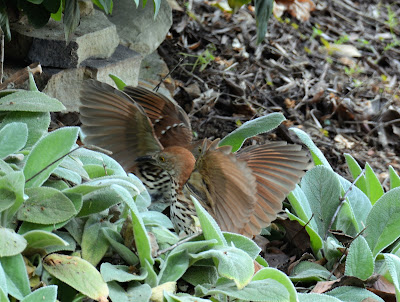 Have you ever witnessed such an elaborate displays from birds in nature? 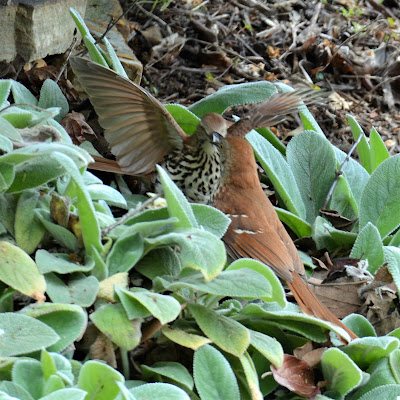 Or see a mating pair appear so irritated with one another? It was quite a spectacle and they didn't even mind that I was nearby taking photos. 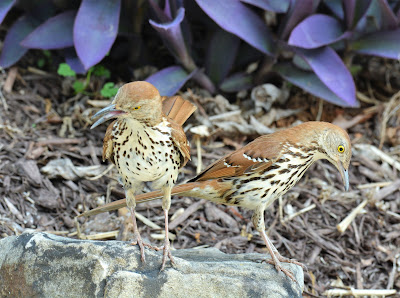 After  a very heated dispute, they seemed to have worked out their differences. 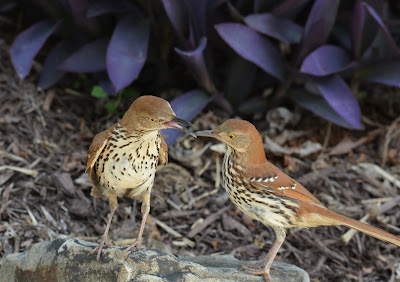 At the time of all this drama I didn't know if I was witnessing courtship behavior or something else.
I've read that the male often presents nesting materials such as twigs, leaves, grasses and bark to the female to woo her. There was lots of leaf throwing during this confrontation in the beginning. So was it a display of courtship or bird drama?

According to Cornell Lab, both male and female thrashers contribute to nest construction, which is large and mostly built with twigs. After the incident was over, I did a little prodding in the shrubs and found a nest with unhatched eggs and a few babies. I very quickly snapped the photo below because I didn't want to anger the parents. They were close by and let me know it too. 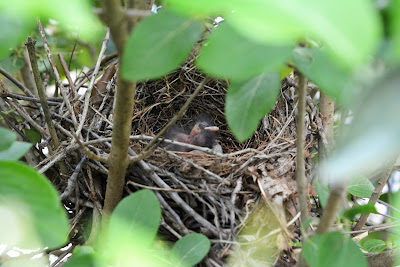 So it seems that it was a bit of a domestic dispute as courtship has already occurred. Perhaps they disagreed over who should sit on the nest and who should search for insects. Like us, maybe bird parents quarrel too.
Labels: baby birds bird behavior birds arguing brown thrasher birds habitat garden nesting birds