Continuing with our home renovation that we completed last year, this is a look at our new outdoor living space that is attached to the new all season room.

This was our starting point. Approximately, 1,000 sq. feet of turf. This space was never used except as a walk through to get to other parts of the garden. We really wanted to get rid of the lawn (!!) and create a space where we could eat meals with friends and family, relax and enjoy the wildlife around us. A space that would be functional yet decorative.

We began by playing around with different shapes for the patio area. We considered a circle, but it didn't work with the existing flower bed lines and we felt that we were loosing lots of usable space with rounded corners. Ultimately we settled on a square/rectangle shape. 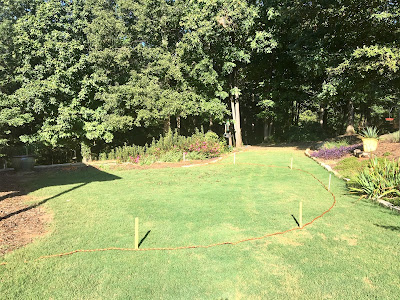 The exposed soil around the turf in the photo above is where shrubs bordered the lawn. Indian hawthorns to the right and ligustrum hedge (blah!) at the top. It was a very happy day when the chain saw was fired up and these shrubs were finally removed. In the photo below, you can also see we had creeping rosemary cascading down the embankment, which was transplanted in kitchen garden and Encore azaleas behind them (the last of the builder installed shrubs). 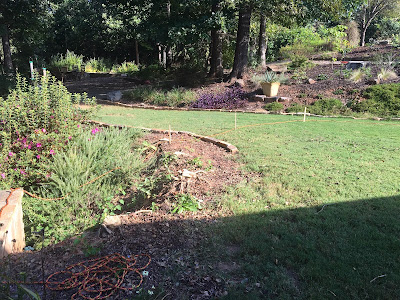 With all the plants removed or transplanted, the master masons were ready to get to work. This is the same crew that has worked on all our hardscaping projects and they are fabulous. Incredibly hardworking and talented professionals. 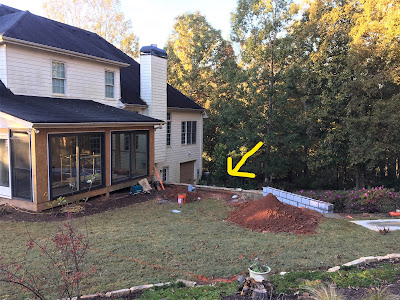 The framework for the fireplace was built first. It is angled off the existing retaining wall, shown by the yellow arrow. 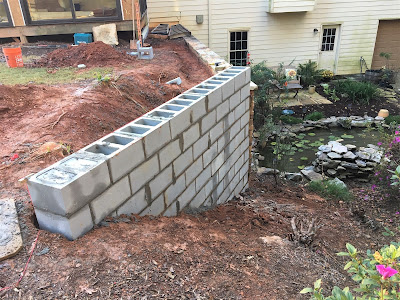 There is a pretty significant slope down the back of the retaining wall where the azalea shrubs were. Our wildlife pond is at the bottom of this area. Eventually, we would like to expand the pond by adding more of a cascading waterfall down the slope, but that is a project for another year. 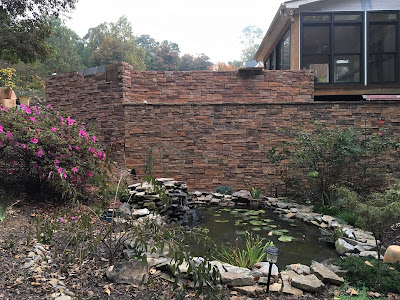 This is the backside view during installation. The first ledge of the wall is the top of the original retaining wall. It needed to be built taller in order to have a level patio. It was surprising to learn how much of a grade there was, because the space looked pretty flat. At first I wasn't sure I liked the idea of heightening the wall, but I really like the ledge and variations in height. The birds also enjoy sitting here. 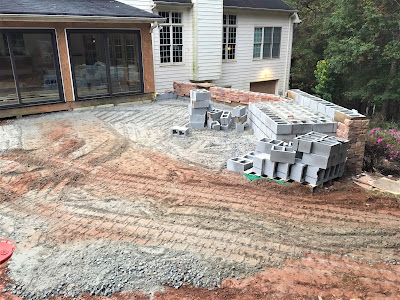 The future patio area (no more turf!) was graded and prepped for the concrete slab. The patio area is approximately 800 sq. feet and wraps around the all season room, so that we have stairs outside all doors. 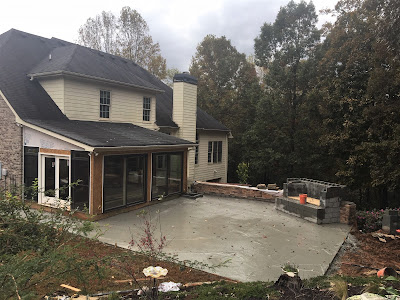 Concrete was poured as the sub-base. Then flagstone was artistically placed to give it an attractive pattern with irregular shapes. 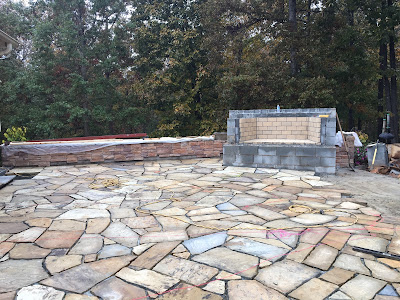 We had a crew of guys here working, so while two worked on the flagstone, others continued to frame the fireplace. It was fascinating to watch how the fireplace was built with cinder blocks and angle iron for support. The interior was constructed with fire brick. 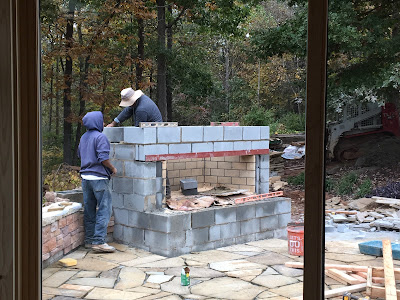 The masons had to deal with some inclement weather, but they forged onward under a plastic tarp. 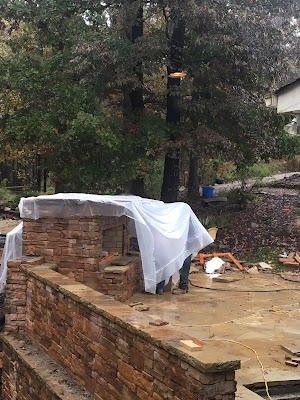 It all came together pretty quickly. The crew had our project completed in just over two weeks.

To balance the large fireplace on the one side, we had a planter stand build in the top left corner. I'm still looking for just the right container to place here. Once the patio was washed down and cleaned, we moved our teak table and chairs to the patio. We purchased some additional outdoor furniture, including a bar table and chairs. We are still looking for the right seating for in front of the fireplace. 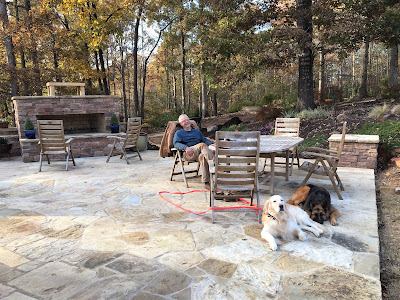 Coming off the top of the patio, we created a path that leads to the back driveway. We bordered the path with landscape stones and mulched it. It's hard to believe now that this area was once turf. 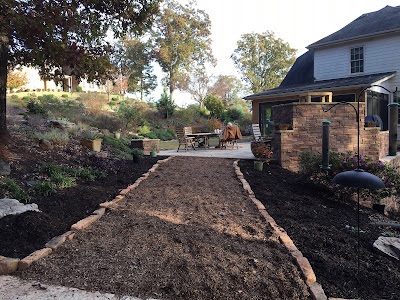 The fireplace is a massive 6 feet on the interior. My husband wanted a large wood burning area that would give off lots of heat. He got it! And, I have a place to put lots of plants when the temperatures warms up and the fireplace isn't in use. I can't wait to do more plant shopping! The top of the fireplace has a vent cover so rain doesn't fall directly into the fireplace. Clean up of ashes is super easy and goes right into the compost pile. 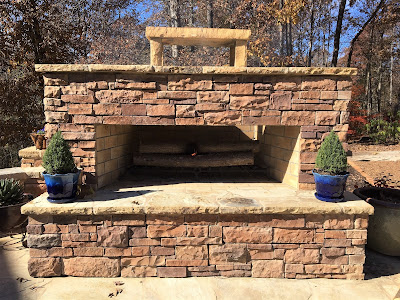 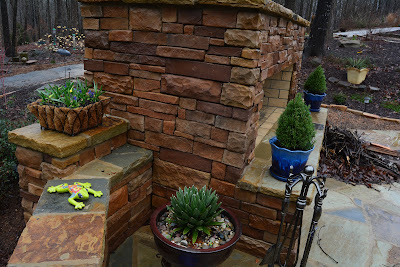 We replaced the ugly down spout with a decorative rain chain, which is something I've wanted for years. I often see them on homes I visit on the Garden Blogger Fling tours, but not so much here in Georgia. 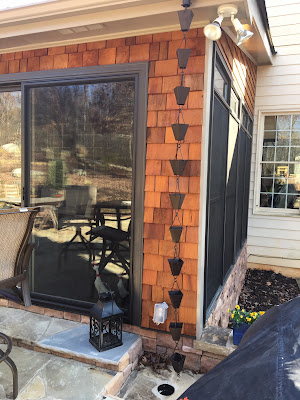 Knowing I wanted to add a rain chain, the contractor designed this basin and drain to take the water to the slope behind the retaining wall (photo below). It has worked beautifully! The redirected water is keeping the shrubs, trees and perennials on this hill sufficiently watered. 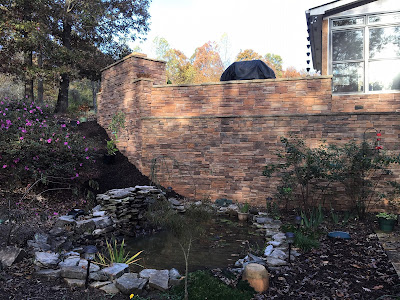 We have used this space quite a bit already. The kids were all home for the National Championship game (Go Tigers!) and mild weather allowed us to entertain outdoors comfortably. 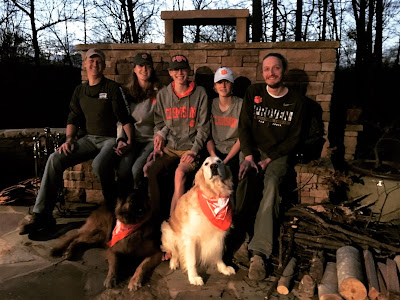 Some final views of the project. We've had so much rain lately, it's been challenging to get outdoor photos, so you'll have to image the space under sunnier conditions. 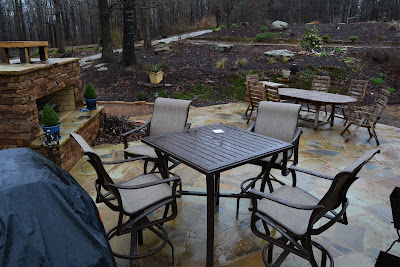 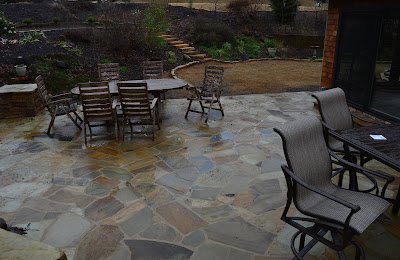