Discovering a Secret of the Franklinia alatamaha Tree

The Franklinia alatamaha tree was first discovered growing along a three mile tract on the banks of the Altamaha River in McIntosh County, Georgia, in 1765 by John and William Bartram. It has never been found growing anywhere else. William Bartram collected seed from this tree and brought it back to Bartram's garden in Philadelphia where it was successfully grown.

The Bartrams named the tree in honor of their friend Benjamin Franklin and the river beside which they found it. The species name 'alatamaha' reflects their variant spelling of Altamaha.

Extinct in nature since 1803, we are lucky that William Bartram had the foresight to grow this plant. All trees cultivated today come from the seed collected by Bartram. We purchased our tree from a local native plant nursery this spring. Already several years old, it bore beautiful camellia-like blooms during the summer much to the delight of several native bees. 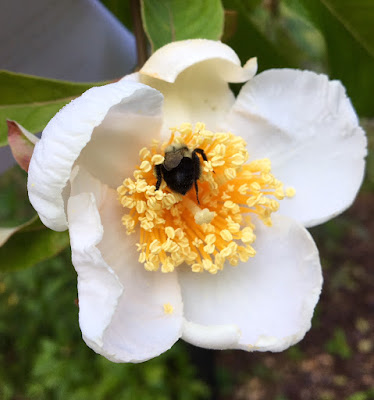 It was later in the summer that I observed the leaves on the Franklin tree looking rather odd and it begged taking a closer look. I was astonished to find several fat caterpillars that I recognized as promethea moth larva. 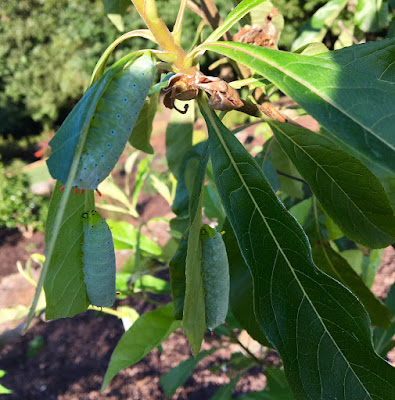 They camouflage themselves well, their vibrant green bodies blending with the lighter hue of the underside of the leaves. The mature caterpillars have four bright red knobs called scoli behind their head and one yellow knob on their rear end. 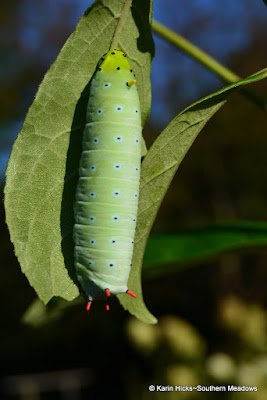 I was not aware that Franklinia alatamaha was a host plant to this spectacular moth. Reference books list host plants as spicebush, sassafras, Chickasaw plum, ash, cherry, magnolia and tulip trees.

The caterpillars are pretty big eaters. They need to consume enough energy to sustain themselves in the pupal stage and into adulthood. As adults these moths do not eat so without proper nutrition at the larval stage they may not be able to complete their metamorphosis or produce eggs. 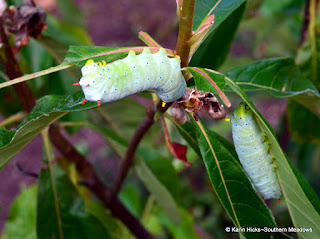 Already mature caterpillars when I discovered the seven on our tree, they were ready to begin forming cocoons. They do this by rolling up in one of the leaves and spinning brown silk around themselves. Anchored to the tree branch the pupa will remain in its cocoon over the winter months, emerging in spring. 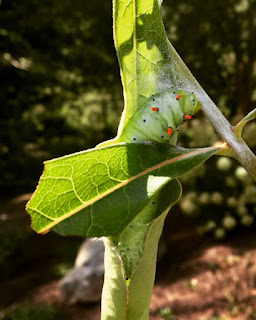 The adults are gorgeous silk moths with eye spots and lightning bolt patterns. When they emerge they are ready to find a mate and continue the next generation. 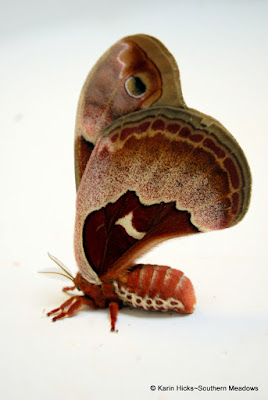 The Franklin tree has a reputation of being difficult to grown. In the Piedmont region it is often susceptible to cotton root rot disease which contaminates much of the ground where this iconic crop was grown. If you are fortunate to grow one of these rare trees keep a watchful eye on its leaves. It just may reveal a special visitor to your habitat garden.
Labels: Benjamin Franklin tree Franklinia alatamaha tree habitat garden host plant for moths native trees of Georgia promethea moth promethea moth cocoon