Gardening for the Marvels of the Night

When planning your garden have you ever considered plants specifically for moths? Butterflies get a lot of attention in gardening circles. The peril of the monarch butterfly has been in the news frequently and brought the subject to the forefront. Butterflies are beautiful pollinators and adding nectar and host plants to attract them is easy to do. For butterfly enthusiasts, there are endless resources including books, classes, articles and blog posts on how to attract butterflies. There are butterfly gardens at nature centers, botanical gardens, parks, zoos, schools and many other public facilities encouraging the public to create similar environments at their homes. Yes, I love butterflies but they are only one family in the insect order Lepidoptera. The other 96% are MOTHS.


Often ignored or completely neglected, moths are hugely important in the garden. Not only are they critical pollinators but they are also important in a balanced ecosystem providing food for lots of baby birds. This week is National Moth week (July 18-26) dedicated to the awareness of this magnificent member of the Lepidoptera family. I encourage you to take some time to observe the diversity of moths in your region, learn about their life cycle and study up on the habitat needs of moths so that you can provide for them in your garden.


There are three times as many moths species as butterflies and they are extremely diverse and interesting. Since most moths are nocturnal they are rarely abundent unless we see them by artificial light or conspicuously resting during daylight hours. This week try leaving a porch light on and see how many moths you attract after dark. You may be surprised who shows up. We left the lights on at our front door recently and got some tremendous results. 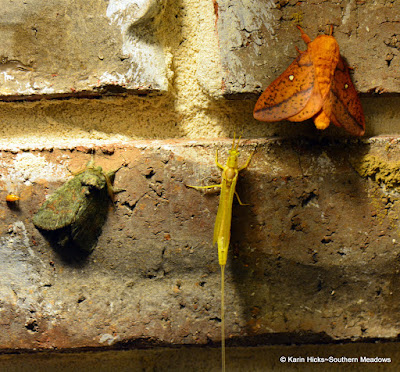 In one evening we attracted some impressive visitors. This is what caught my eye from inside the house and invited me to open the door to see who arrived. Two Luna moths, one at our front window and the other hanging from the door frame were my first observations.


Luna moths are probably the most endearing moths; I suspect since they are so large and look very much like a butterfly.  They are also strongly attracted to UV wavelengths and therefore are often seen at house and street lights. There is some concern that light from man-made sources deters lunas from mating and therefore has a negative impact on their populations in urban areas.


Their silk moth family name Saturniidae is based on the eyespots that contain concentric rings reminiscent of the planet Saturn. Members of this family are large and some of the showiest moths around with striking colors and shapes. Moths included in this group are the Cecropia, Polyphemus, Promethea, Luna, Io and Imperial moths.

The regal moth (Citheronia regalis) is another very large moths and was also at our front doorway. It has a wing span of 5.5 to 9.5 cm. and the caterpillar (larvae stage) is equally as large, growing to almost 14 cm. They host on a variety of trees including walnut, hickory, pecan, persimmon, sweetgum and sumac.

Their gray and orange stripe pattern on the wings is stunning and I was taken by its adorable fuzzy striped head. I really wanted to reach out and give it a little tickle. 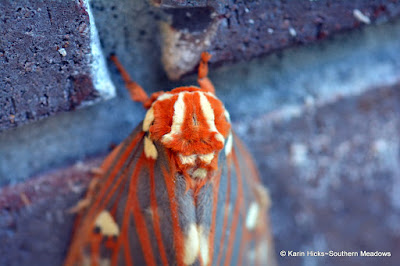 Another intriguing moth, found clutching to the window, is this Imperial Moth (Eacles imperialis). This moth has just one brood a year and hosts on several conifer and deciduous trees including pine, oak, box elder, maples, sweetgum, honeylocust, red cedar, sycamore, basswood, bald cypress and sassafras. Adults emerge before sunrise and mate after midnight the following day. The female then lays her eggs at dusk and the caterpillars hatch in about two weeks. Pupation takes place underground overwinter.


The forest dwelling Rosy Maple Moth (Dryocampa rubicunda) is one of the smallest of the silkworm moths with a wing span of just 2 inches. The caterpillar often called green-striped mapleworm, eats the foliage of maple and oak trees. Young caterpillars feed in groups and then become solitary as they mature. They are fierce feeders in their larvae stage sometimes defoliated trees. As adults however, they do not eat at all, relying on their fat storage to survive. Three generations are produced in the South and the last generation will overwinter in its pupa stage underground emerging the following spring.

The unmistakeable Giant Leopard Moth is another example of the gorgeousness of moths. Just look at those metallic accents. You can read more about this species on my post profiling this moth here.


Moths in their adult form are essential pollinators. They are the night shift if you will, taking over pollination services from butterflies who fly during daylight hours. It is easy to create a habitat that supports moths.Here are a few essential elements.

Plant a variety of flowers
Most moths in their adult form need nectar for energy. Certain blooms have more available nectar so by choosing these plants for your garden you create a better feeding station for moths. Native plants are more nectar rich than hybrids or cultivars. In general moths are attracted to cluster blooms and flat open flowers that provide for easy landing preferably in white or dull colors. Double blooms have little to no nectar availability. Blooms that service moths typically open in late afternoon to early evening specifically for these nocturnal flyers many of which are highly fragrant. Some plants are solely dependent on moths for pollination and thus their survival. The yucca moth for example is the sole pollinator for the yucca plant. It is a good idea to have blooms available from early spring through late fall. Datura, Four o'clock, flowering tobacco, honeysuckle, morning glory, evening primrose, and Jasmine are a few examples.

You need host plants
Certain plants provide the necessary food for the caterpillars. Some species will forage on a wide variety of plants while others are restricted to a few plants and some only to one type of plant. Many trees are hosts for moths such as oaks, maples, hickory, sweetgum, cherry, pine, sassafrass, persimmon and willow. Moths in their larvae form can be as spectacular as adults. Take a look at a few we see in our garden.


Stop being so tidy!
As a general rule you can't keep an immaculate garden and expect to support wildlife. So now you have an excuse to be a lazy gardener. Moths in the adult and larvae stage need leaf litter, old stems, logs and plant debris to hide from predators. Don't cut back your expired plants until spring. Many moths overwinter in the ground in their pupa stage and need undisturbed places to do so.


Dare to go organic
Herbicides and pesticides are harmful to moths in all stages. Organic gardening is beneficial to all wildlife plus eliminating these chemicals will also increase the number of beneficial insects in your garden.


This week, challenge your preconceptions about moths and get to know these marvelous insects. You may even be inspired to create a welcoming habitat in your garden by including some nectar and hosts plants specifically for moths.
Labels: gardening for moths host plants for moths how to support moths in backyard moths of Georgia National Moth Week