Beauty in the Storm

It began as a typical winter rain day, but then the temperatures began to spiral downward and the rain began to freeze on the trees. As day turned to darkness and I lay in bed trying to sleep I could hear the snap, crackle, pop of branches breaking and tumbling down to the ground. Then bigger booms as trees came crashing down. Weak hardwoods and tall, skinny pine trees just couldn't handle the weight of the ice. Lights flickered on and off several times and eventually the power went out for good. We were without power all night and woke to a chill in the air. No heat, no internet, no cell service. We felt very disconnected from the world.


As morning graced the garden we could see all the damage from the ice storm. The linemen had been out working tirelessly all night trying to restore power. More than 200,000 people were impacted. The crews risk their lives in such treacherous conditions. They are such brave souls replacing poles, fixing lines and removing trees to restore power as quickly as possible. 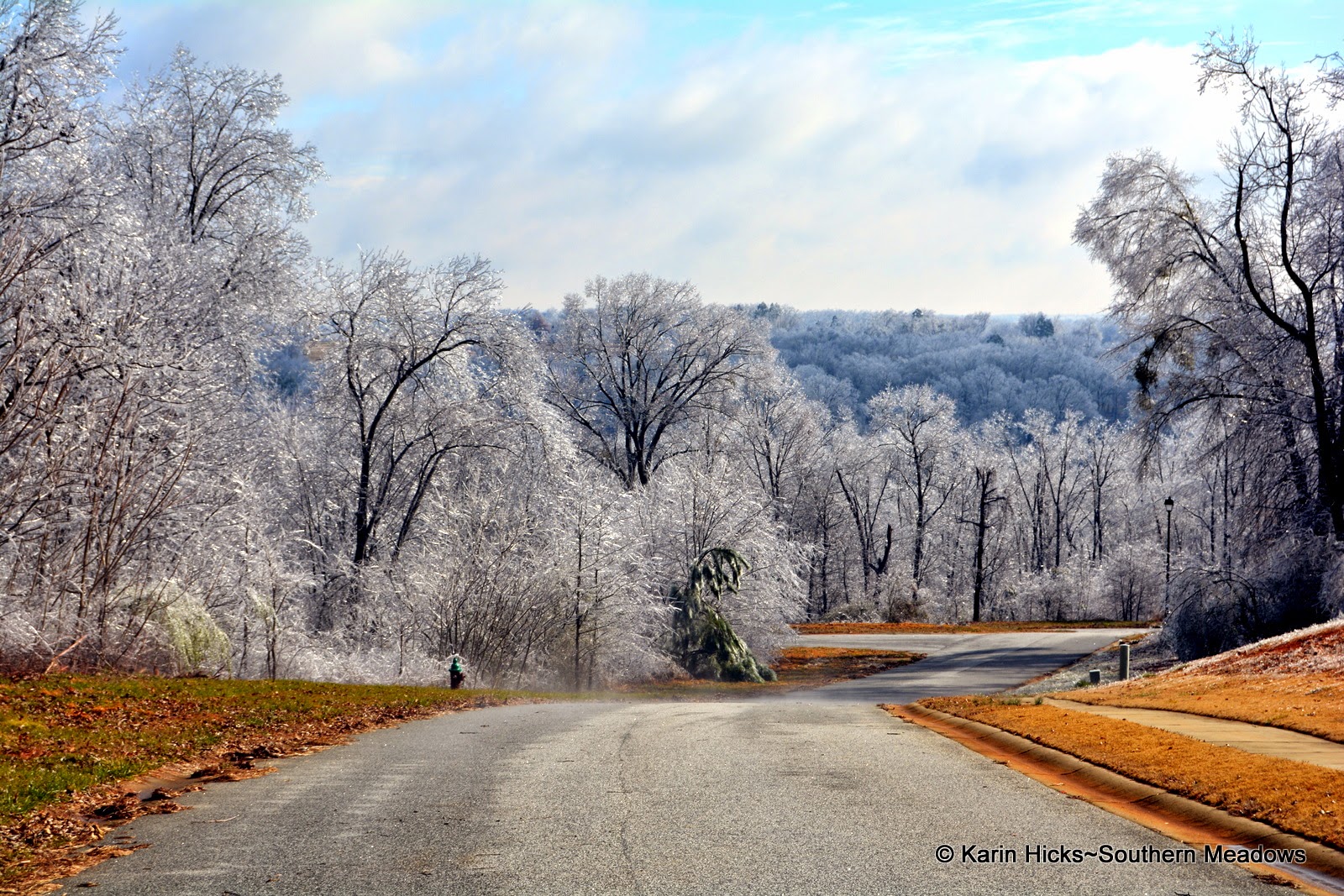 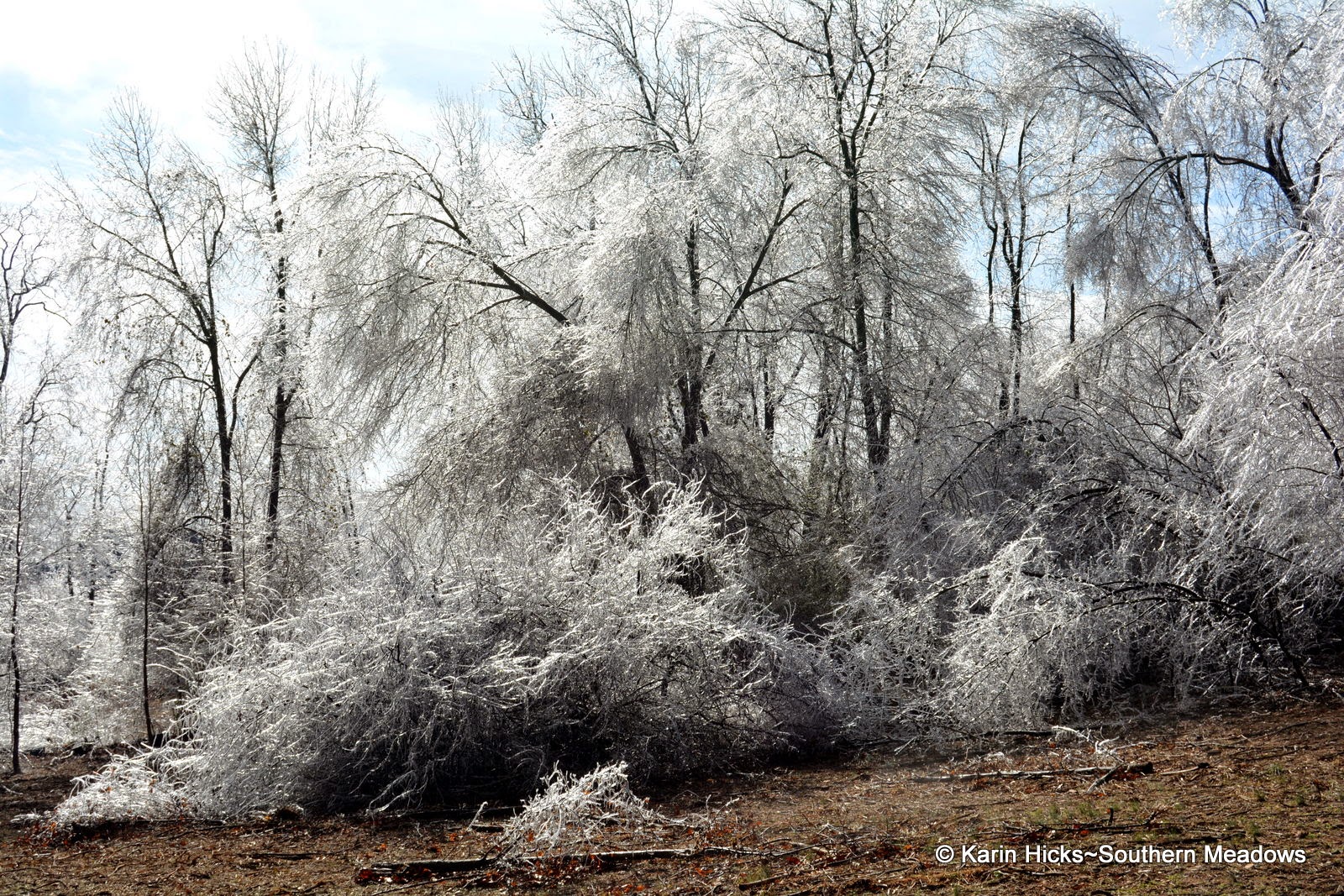 The ice storm caused a lot of disaster but there is also beauty to be found in it. The trees heavy under a coat of ice shimmered and shone as the sunlight hit the icicles and sparkled liked diamonds. 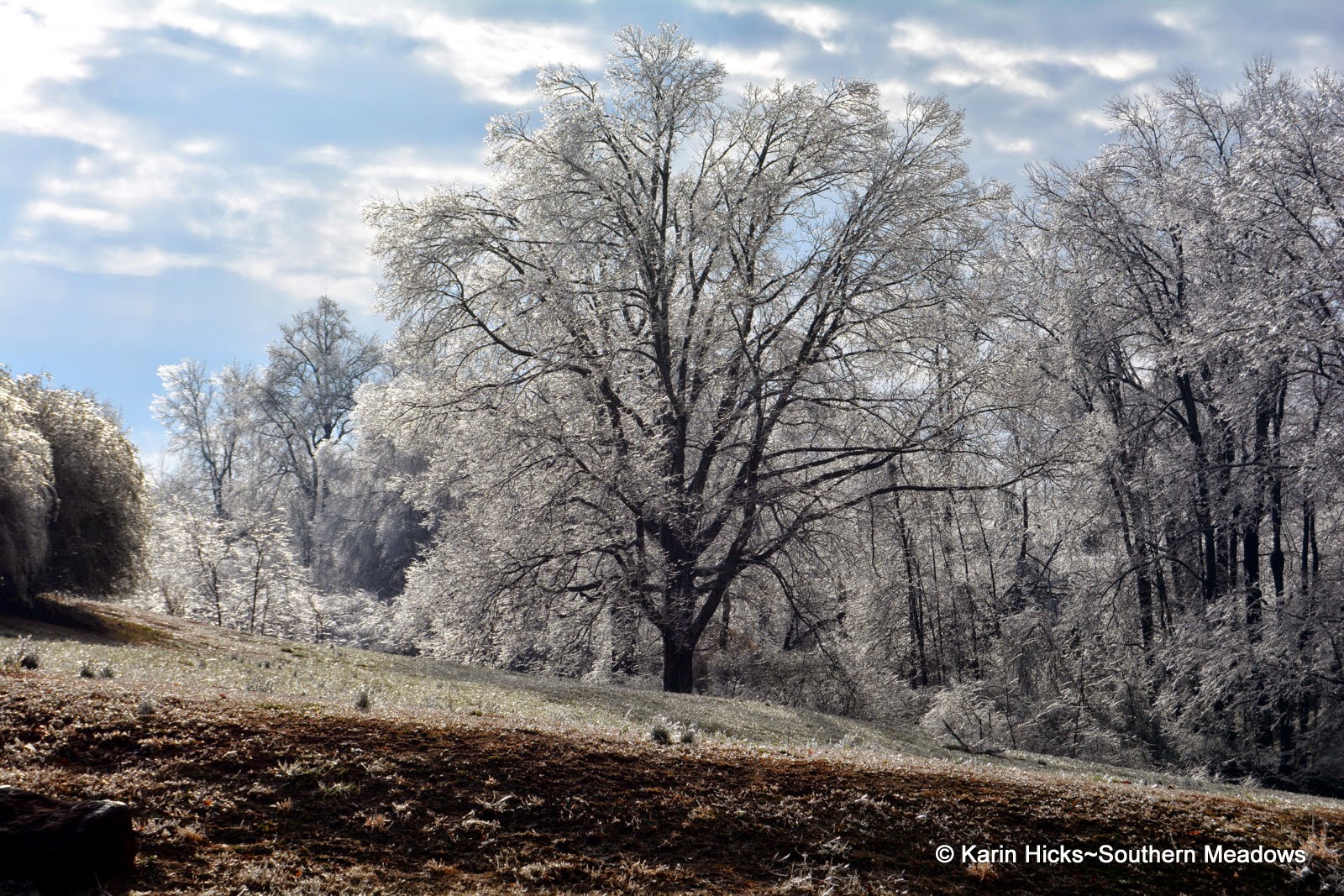 Our cherry trees and plum trees were just about to burst into bloom when the storm hit and encased them in a bubble of ice.


The buds were frozen in time and gave a pink hue to the ice capades. 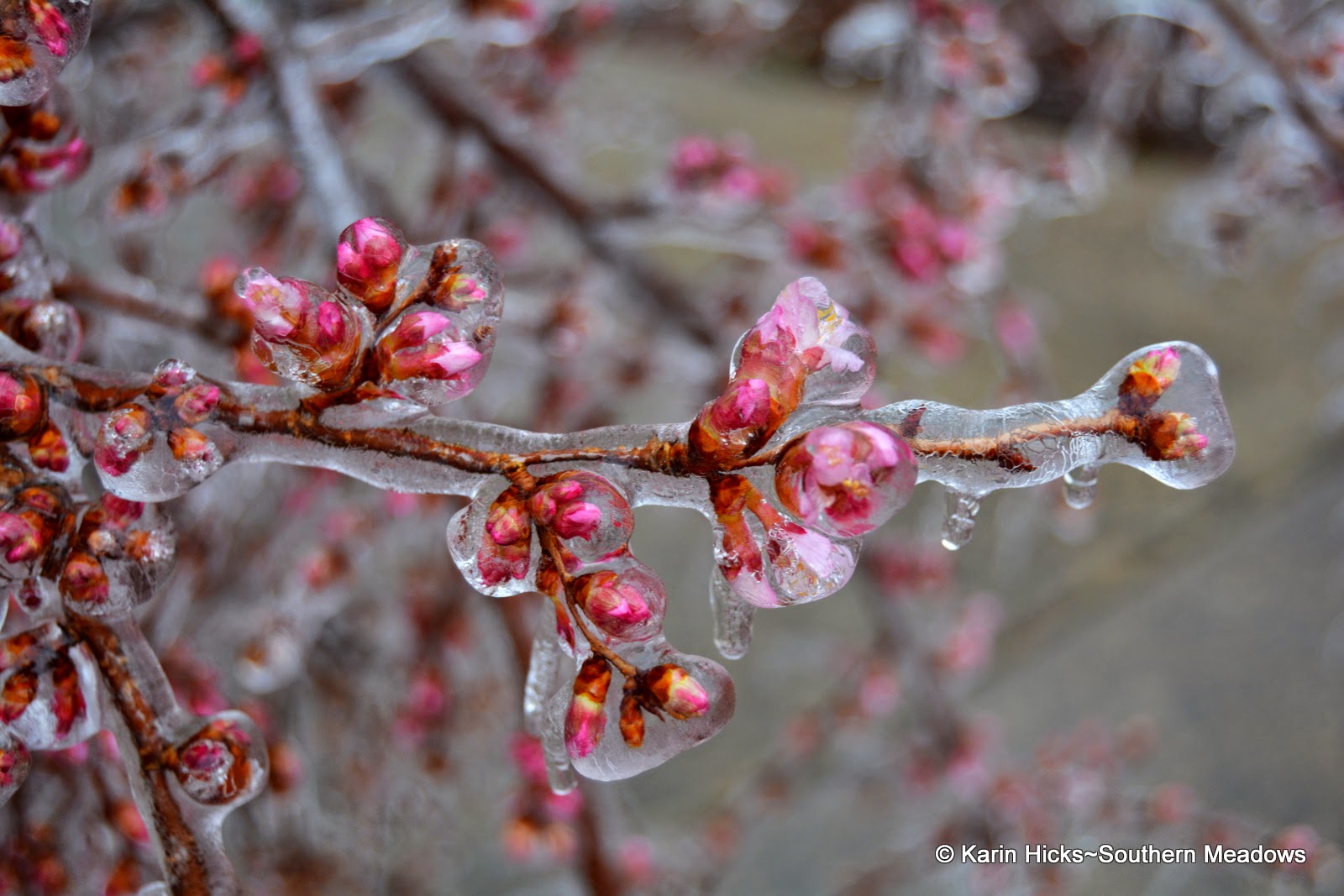 Walking through the garden I found more blooms being brave little souls under the spell of the ice. 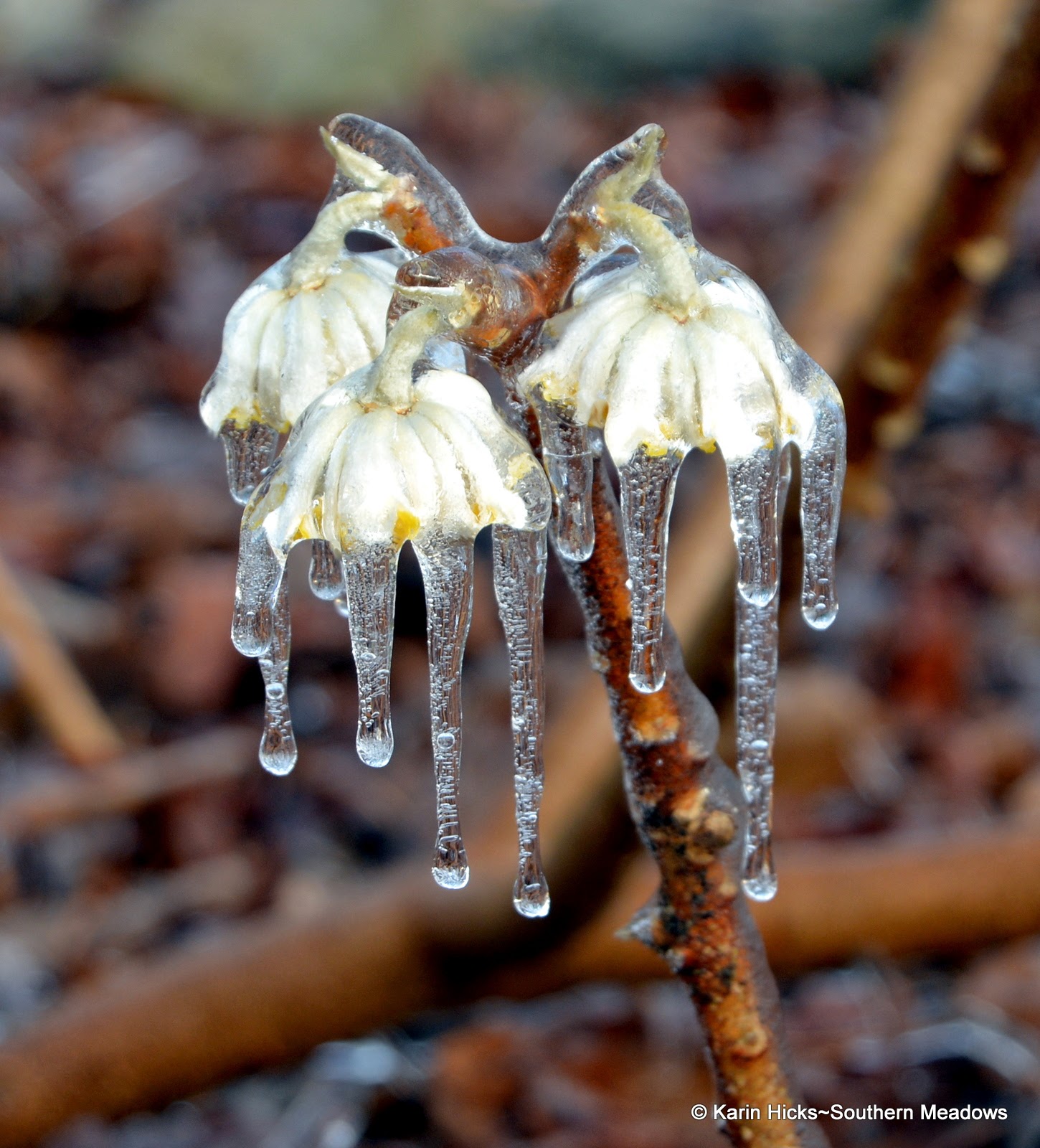 Some that couldn't hang on and tumbled to the ground with their glass house in tact. 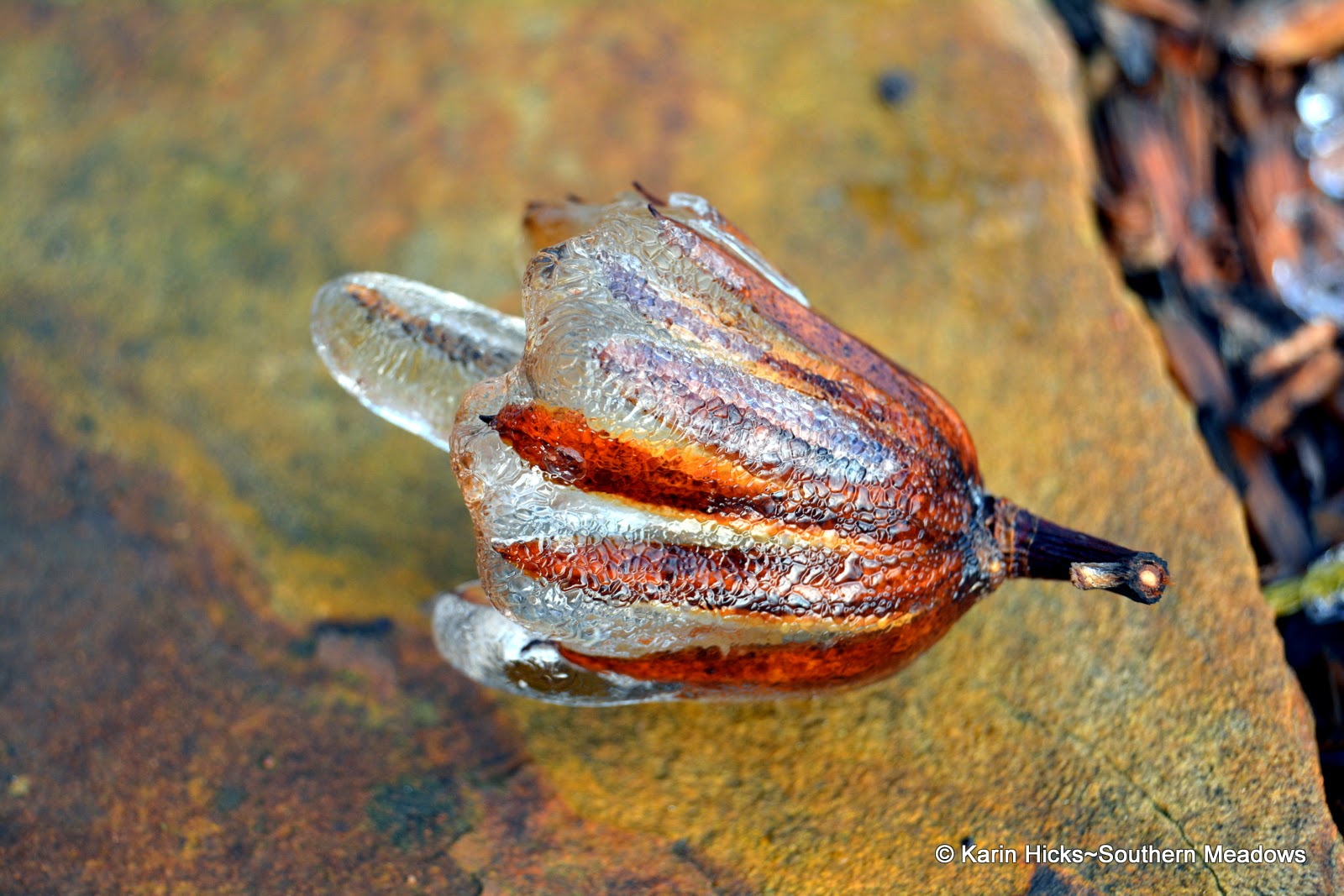 And others that are holding out for warmer days (may we be blessed with those soon!) 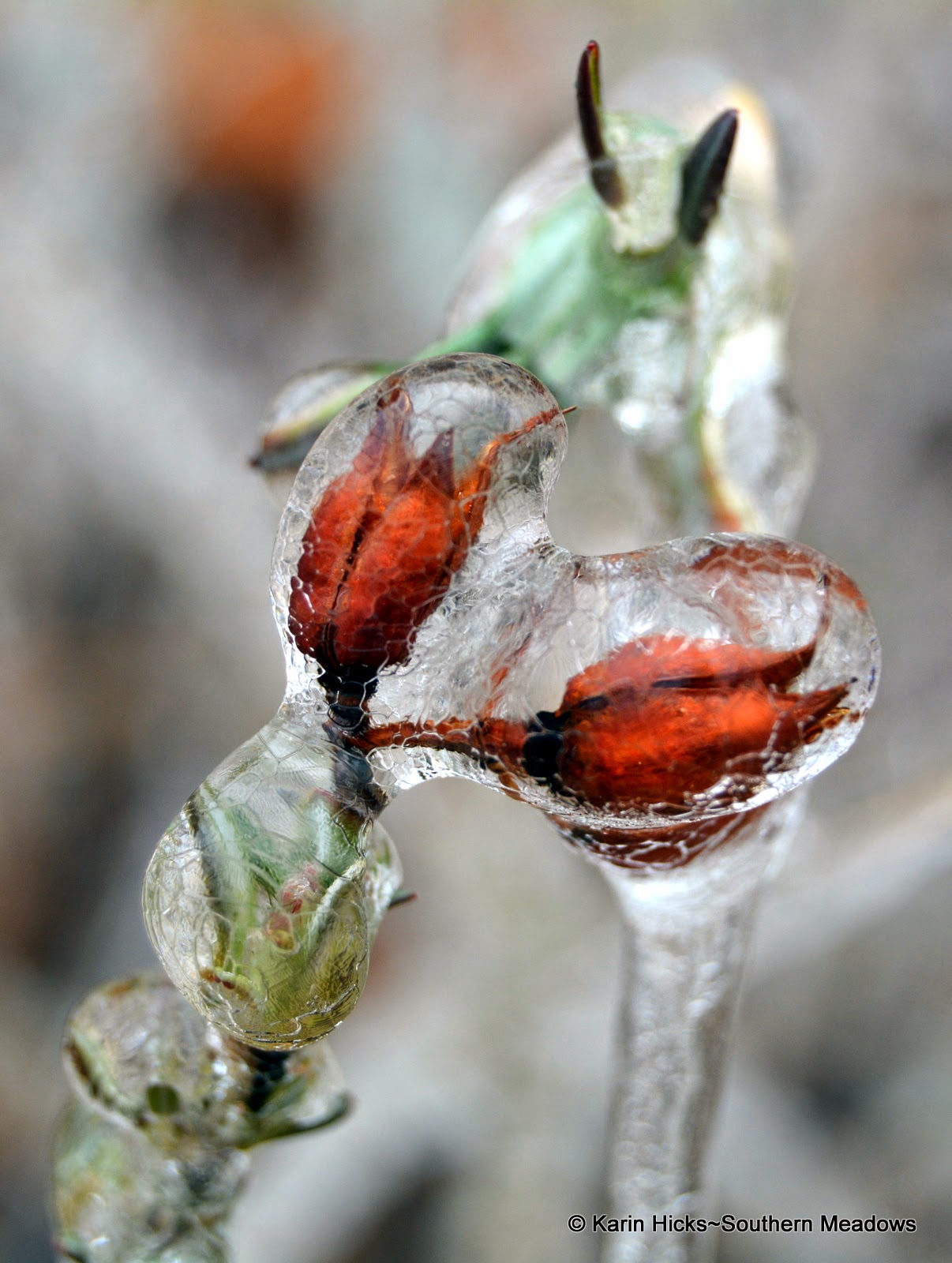 The naturally made ice sculptures added some fabulous winter interest to the garden. 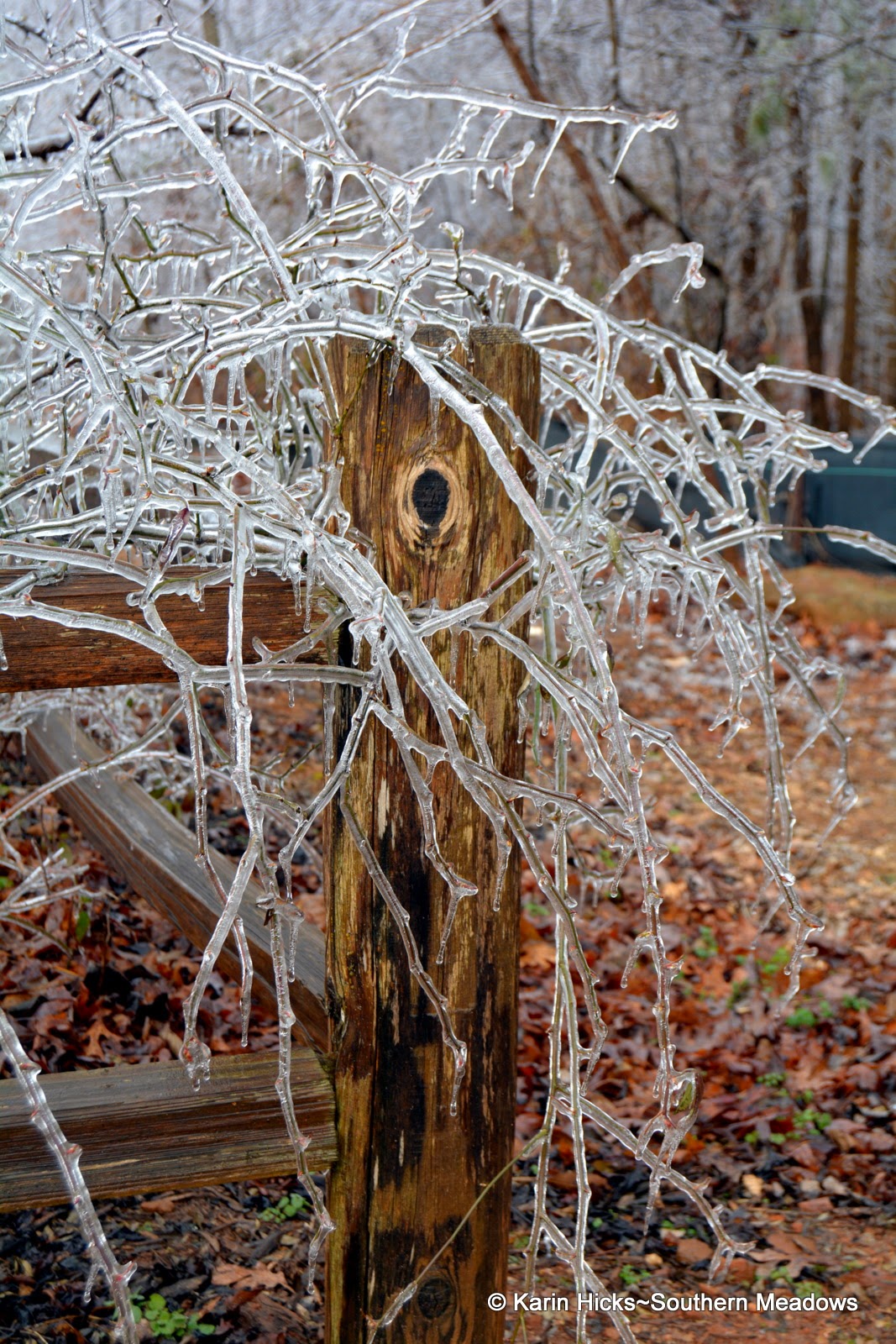 I watched the birds trying to sit on icy limbs or eat at the feeders that were frozen in ice. Even these skilled species had a difficult time maneuvering the elements. My heated birdbath wasn't even working for them since it is electrically powered. The downfalls of modern technology. 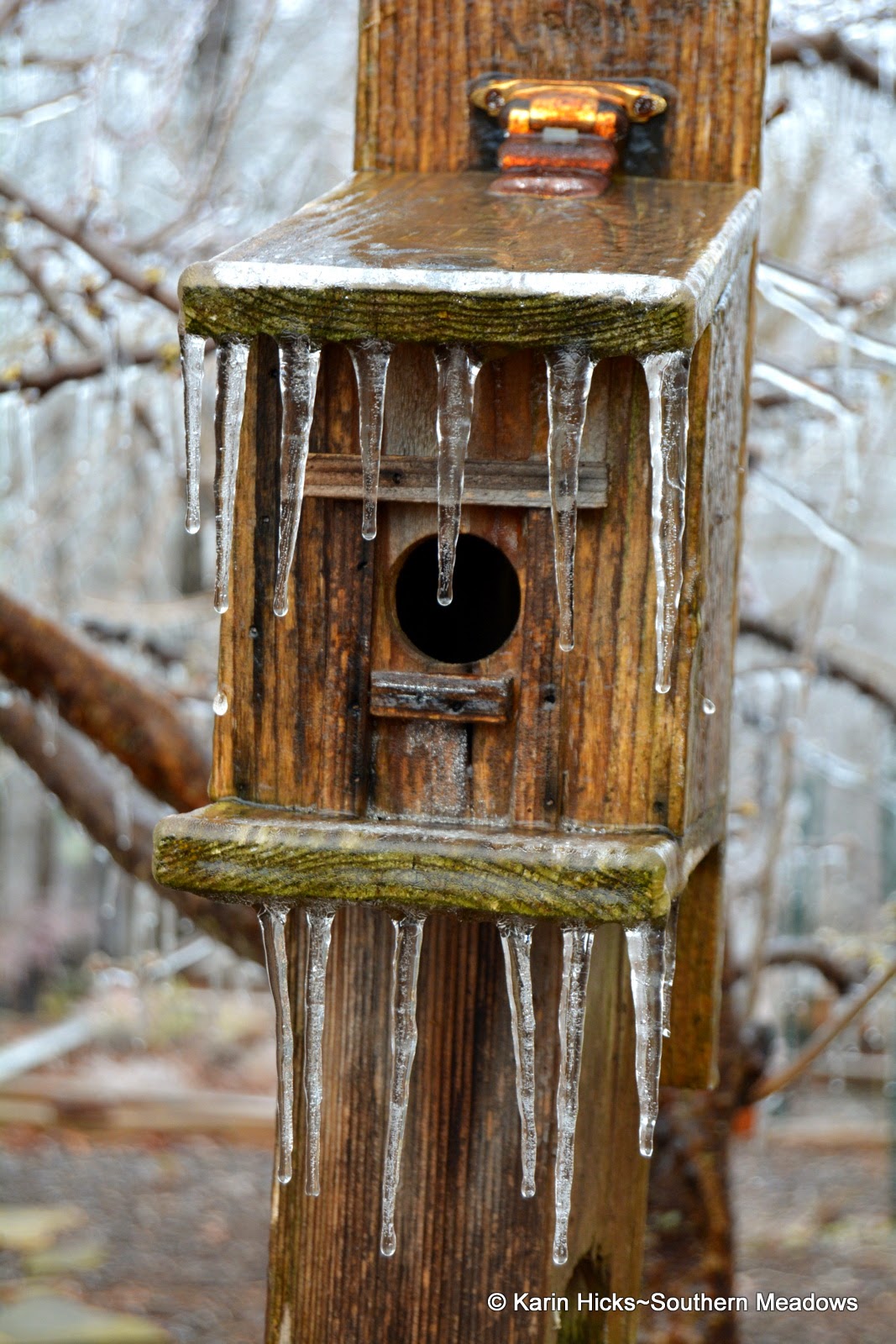 The freezing rain hanging in the form of icicles from branches, bird houses, fences and blooms became a science lesson for my children. 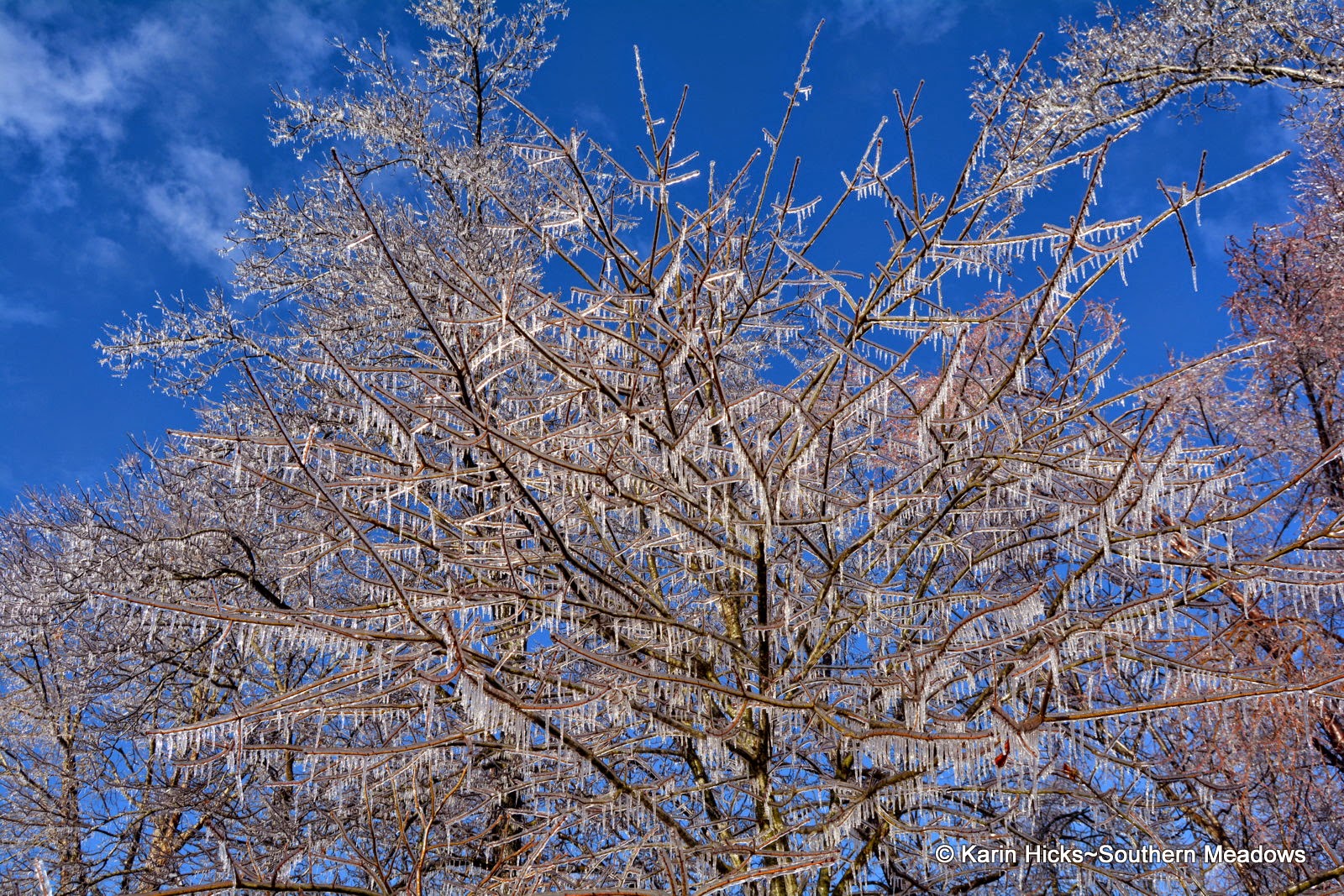 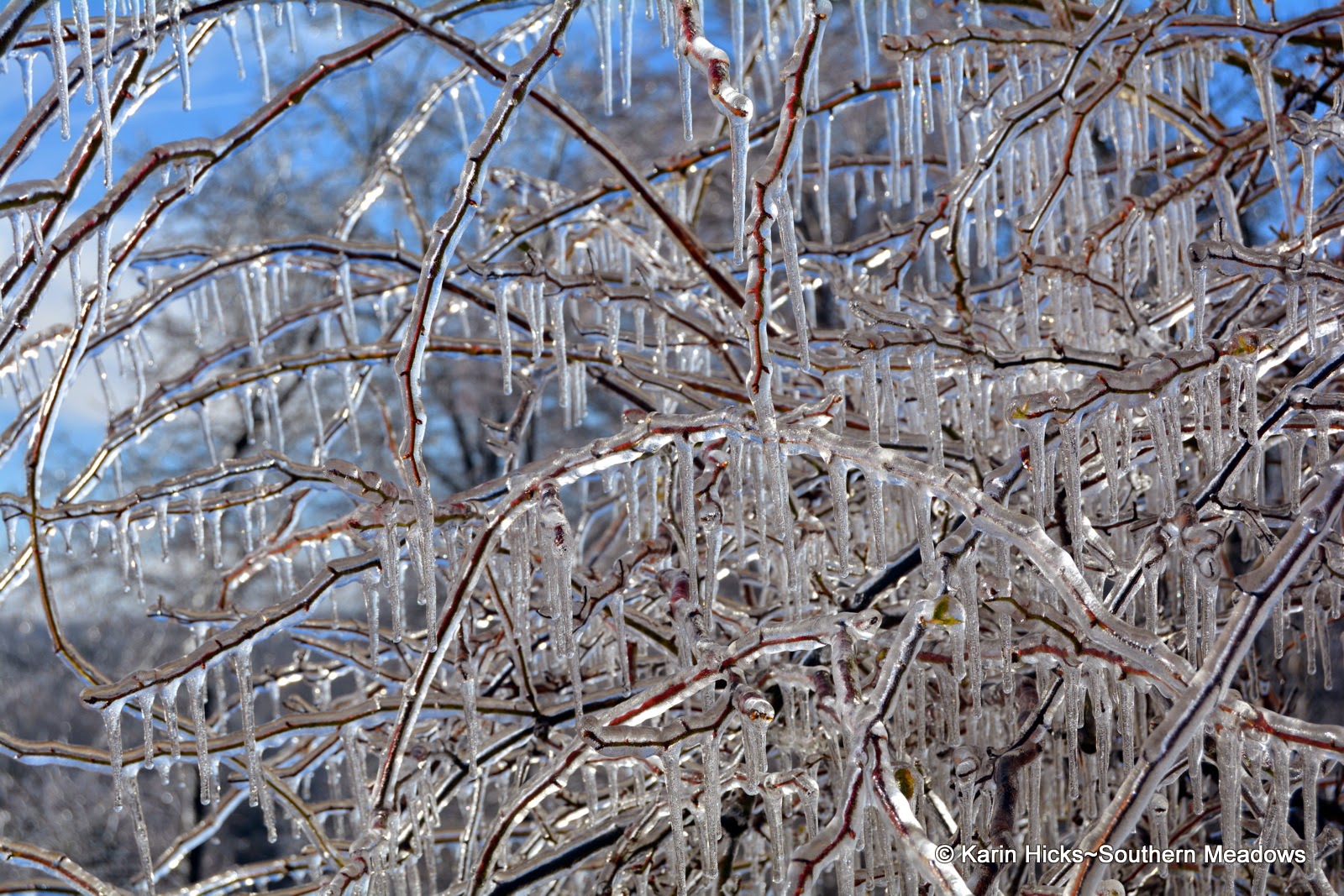 And, also made for some interesting shapes in the grasses, leaves and branches 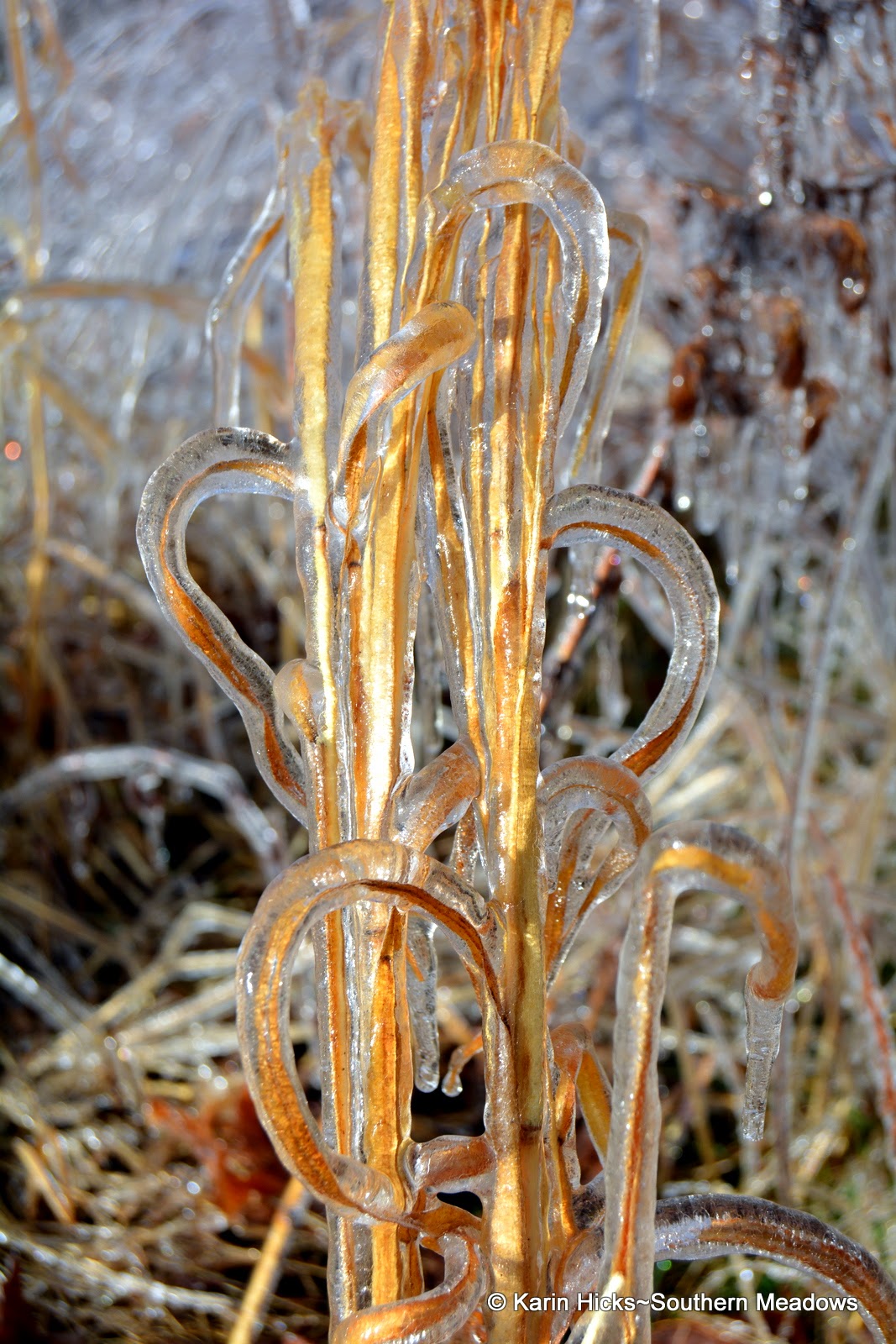 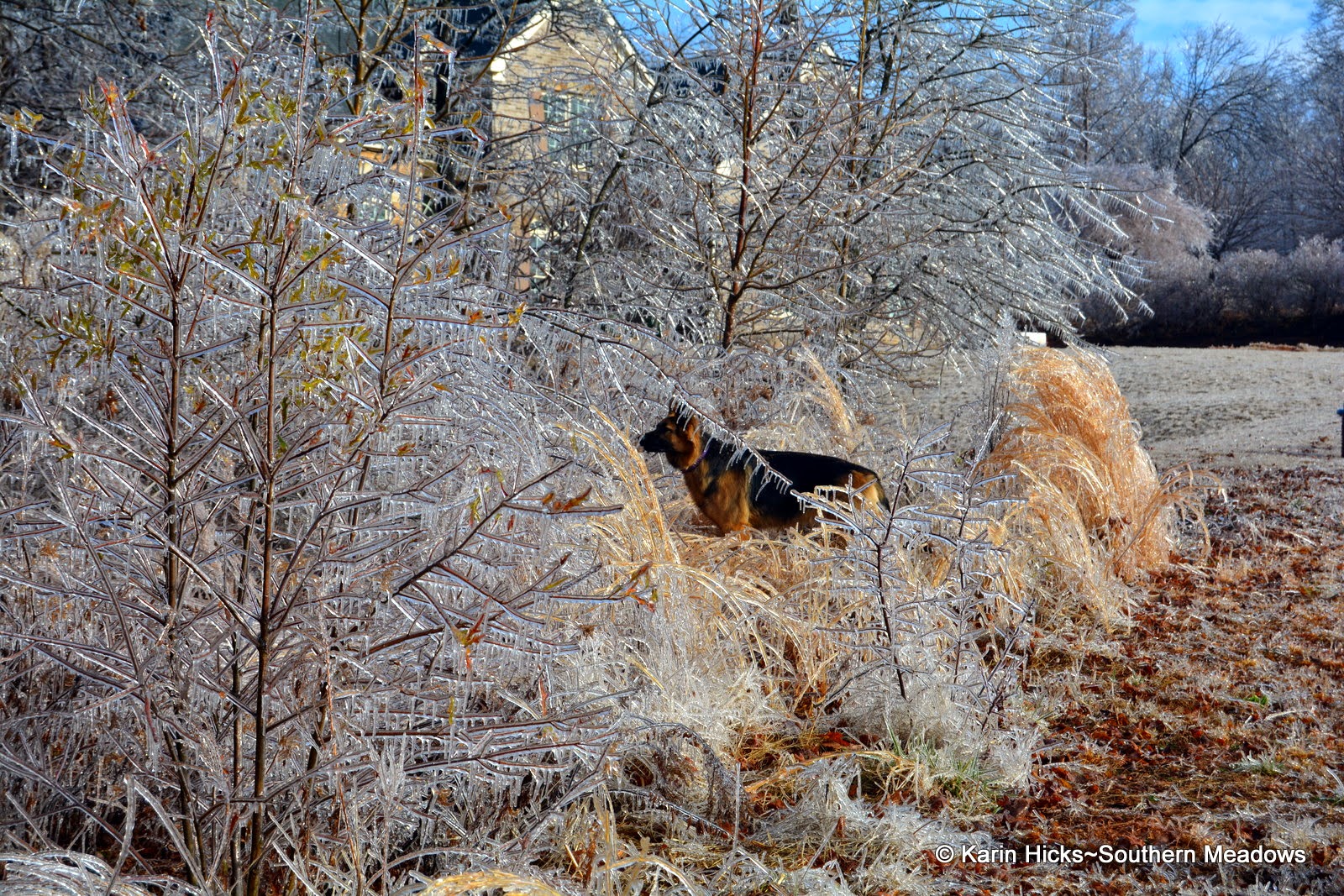 We were all waiting for the sun to warm us up with the exception of our Shepherd who reveled in the arctic conditions. It was mid-day when the sun appeared and began to melt some of the frozen water creating an ere atmosphere with fog kicking up.

As you can see in these photos the roads were clear of ice, the ground too warm for it to hold. But there was enough damage done. Our power came back on 15 hours later. We were fortunate compared to some who were out of power for several days. The wind that swept in the following day felt like Boreas chilling the air with his icy breath. Thirty-five m.p.h. wind gusts hurled ice around the garden making it hazardous to walk and drive around. Shattered ice looked like broken glass carpeting the forest floor.

Overnight our temperatures plummeted to a winter low of 15 degrees (feeling like 0 with the windchill). My thoughts were with those still without heat as the wind had caused more outages despite all the efforts of the Jackson EMC crews. 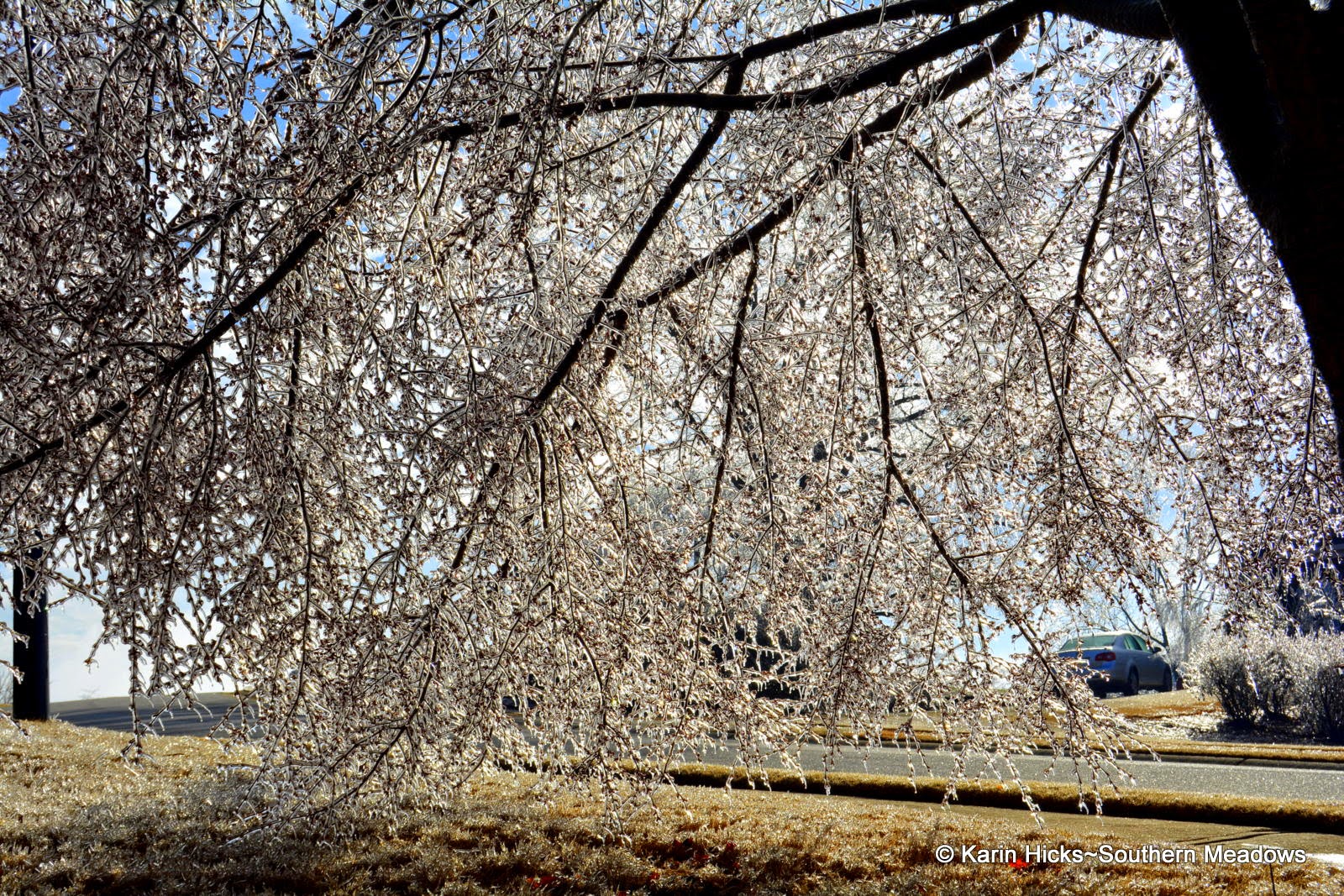 These forces are out of our control but finding beauty in these worst of times makes for some good times. As Charles Dickens wrote in his Tale of Two Cities,

OK...so we're not experiencing anything as dramatic as the French Revolution but some of the words felt applicable (artistic interpretation). 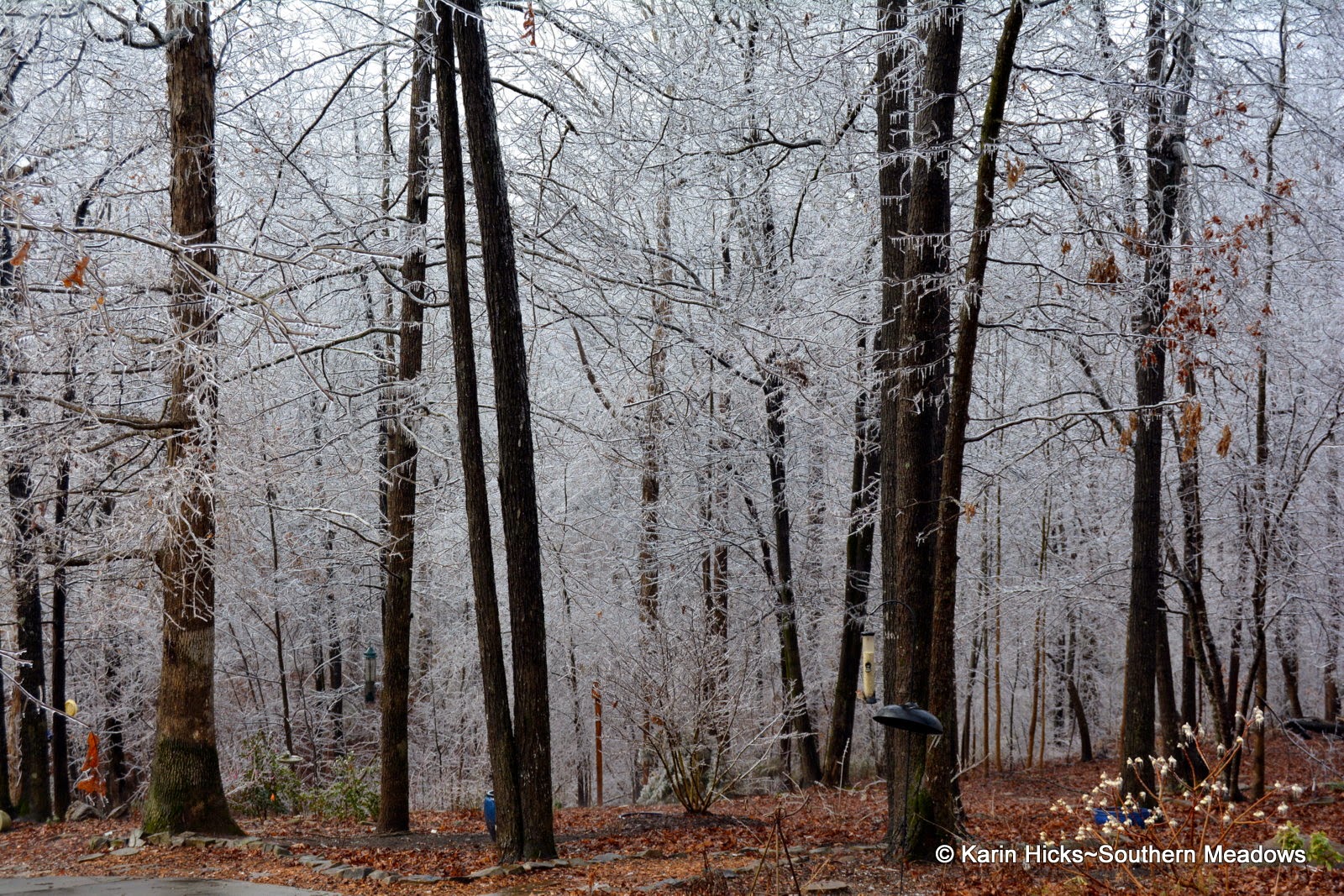