By the time December rolls around most of the garden has been put bed and colder temperatures have rolled in. With the garden resting, my energies turn to the seasonal festivities. Our holiday traditions are an eclectic mix of our family's heritage...my German/English roots, my husband's Southern background with our experiences living in various European countries thrown in for good measure. 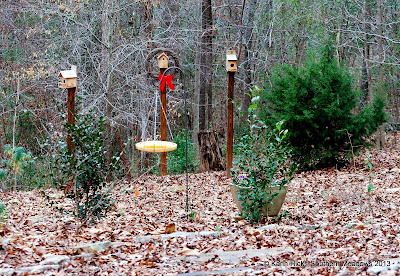 At Southern Meadows we begin the Christmas season with Advent. We make an advent wreath which is different each year but always uses fresh, natural material. Beginning on the fourth Sunday before December 24th, we light a new candle each Sunday and sing this little German song: 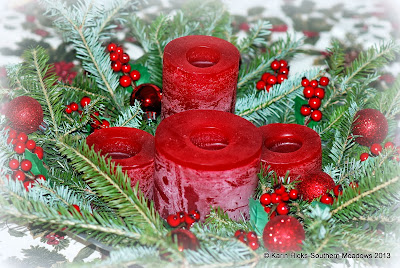 One of my favorite Advent traditions is Saint Nicholas Day which is celebrated on the 6th of December. The true story of Santa Claus begins with St. Nicholas, who was born during the third century in the village of Patara. At the time the area was Greek and is now on the southern coast of Turkey. St. Nicholas' wealthy parents, died in an epidemic while Nicholas was still young. Nicholas used his whole inheritance to assist the needy, the sick and the suffering. He became Bishop of Myra while still a young man and was known throughout the land for his generosity to those in need, his love for children and his concern for sailors and ships. The custom of giving presents during the Christmas season comes from St. Nicholas. Through the centuries many stories and legends have been told of St. Nicholas' life and deeds. You can read some of them here.

St. Nicholas day is widely celebrated in Europe. It is the main day for gift giving and merrymaking. My children set out their shoes/stockings on the night of December 5th and in the morning they find them filled with goodies from St. Nick. 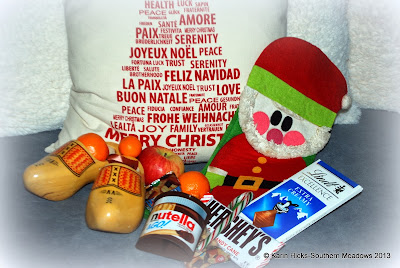 Tree decorating is a major event in our home. Fresh trees bring such joy and cheer especially when the landscape is so brown and gray and the evergreen fragrance through our home spreads tranquility and peace. The concept of a Christmas tree originated in Germany in the 16th century. Legend has it that Martin Luther (founder of the Protestant faith) brought home an evergreen tree after seeing its beauty in the woods with thousands of stars shining through the evergreen branches. He placed candles on the tree to mimic the stars' glow.

We display three trees in our home at Christmas. One tree is adorned with ornaments from our childhood and those we collected in our travels and all the places we've lived. It is a celebration of our family history and memories. I love that there is a story behind each ornament that is hung. Then we have a tree which we adorn with all the handmade ornaments from our children. This tree makes me especially happy since it is filled with such love and care. 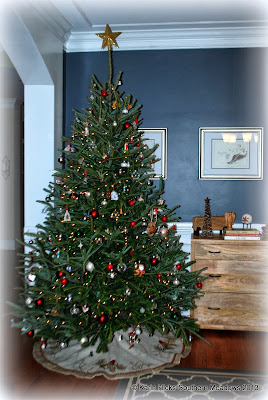 As the Christ child was born in a manger, in the early years, people would bring their animals indoors to be part of the Christmas celebrations. German legend has it that the spiders were not allowed in the home. The Christ child was sad that they were excluded from the celebrations and helped them get into homes on Christmas eve. Spiders worked all night long and covered the trees with webs. In the morning the webs sparkled on the trees and the people were amazed. And so, the tradition of adding tinsel to Christmas trees was born.

Outside on our front porch we put up a tree which celebrates nature. The tree is adorn with nesting houses, mini watering cans as a tribute to the gardeners who support wildlife and then the kids and I made some edible birdhouses. We purchased wooden houses from the craft store and then covered them with an edible glue and seeds. I got the recipe from blogger friend Indie over at Red House Garden. Here is her post on how-to make an edible bird house. 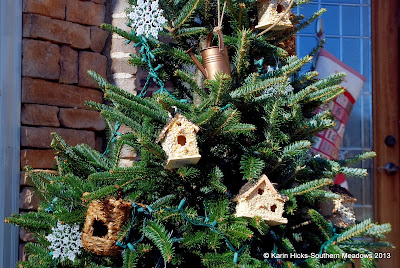 And speaking of birds...we will be participating again in the Great Backyard Bird Count which takes place from February 14-17, 2014. Mark your calendars! For more information see here.


I am joining Gardens Eye View's meme for Seasonal Celebrations. A round-up of participating blogs will be posted on the solstice so do pop over and have a read.


A very merry Christmas from our garden to yours;
and, all the happiest of days in 2014!

Don't forget to eat some healthy soul food on New Year's day to bring you a year of luck. See my post from last year for the Hoppin' John recipe.