Sunflowers say summer like no other plant. In French the word for sunflower is "tournesol" which means turn with the sun. 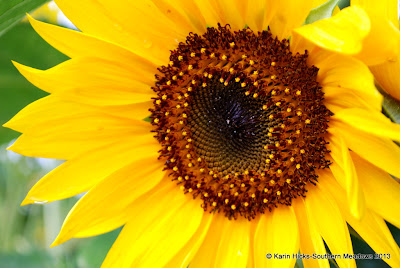 There is something about their bright, cheerful faces that just makes one happy. A field of sunflowers on gently rolling hills are reminiscent of Van Gogh works of art, we adorn our gardens with dozens of sizes and varieties for their vibrant beauty, and we use them to attract birds or grow for our own eating pleasure.

So why not celebrate them with a festival in their honor. 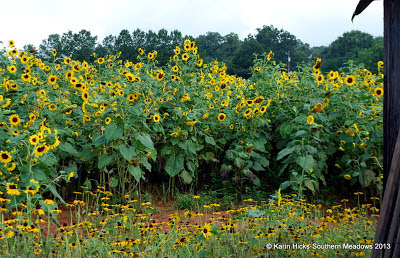 But first, lets get a little history on this popular flower; after all, it has put down roots in most of the world. And if you are not a history buff, just skip down to the next paragraph.

Sunflowers (Helianthus annuus) are native to North America, domesticated by the American Indians into a single headed plant with a variety of seed colors (black, white, red & striped). They used the seeds for an assortment of food staples as well as dye for textiles, body painting and medicinally for snakebites and body ointments. The Spanish took the plant to Europe in the 1500. It became a popular cultivated plant under Peter the Great, first as an ornamental and then cultivated for its oil. The Russian Orthodox church increased its popularity since it forbid most oil foods from being consumed during Lent. Somehow, the sunflower didn't make it on the forbidden food list and therefore, increased in popularity. By the 19th century Russian farmers were growing over 2 million acres of sunflowers. They implemented a very successful government breeding program under V. S. Pustovoit and today the most prestigious scientific sunflower award is named The Pustovoit Award. By the 1800 the sunflower seed made its way back to the U.S. and seed companies were advertising the "Mammoth Russian" sunflower seeds. Canada began its first official breeding program in the 1930s. The sunflower was hybridized in the mid-seventies providing higher yields and disease resistant varieties. Over 5 million acres were dedicated to growing sunflowers for oil production in the U.S. at this time.

Now on to the fun stuff

Every July a private family farm in Georgia holds a festival to celebrate these happy flowers. This award winning festival is framed around 15 acres of sunflowers. 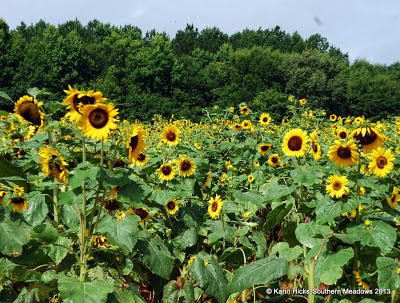 It attracts lots of families, photographers and sunflower enthusiasts every year. Even the rain showers didn't deter people from coming out. In addition to the fields of sunflowers there is live music all weekend long, BBQ, artist market, petting zoo, pony rides, and enchanted forest and for the first time zip lining over the sunflowers. For more details go here. 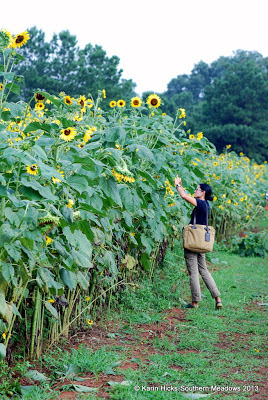 Sunflowers are bold and fiery and stand up alone 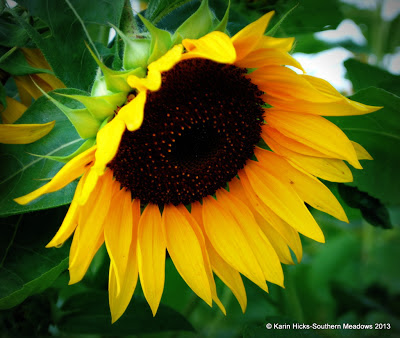 but also look stunning in a crowd. 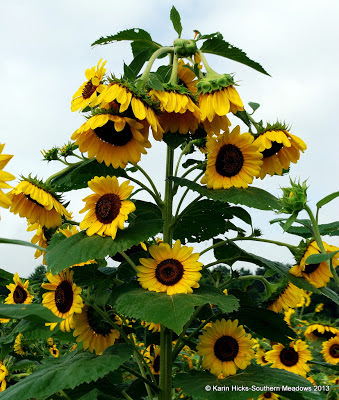 For $20 you can pick your own flowers to take home in a commemorative pot. Sunflowers make terrific cut flowers but beware that according to folklore it is bad luck to cut down a sunflower. 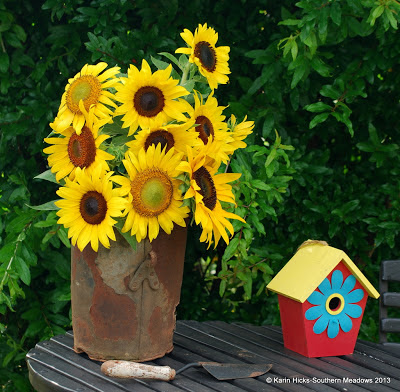 Sunflowers are pollinated by bees and are a great flower to use in a garden for attracting birds. 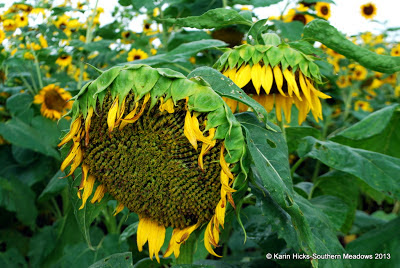 With so many varieties of sunflowers available there is one for everyone's garden. Do you have this quintessential summer flower growing in your garden? 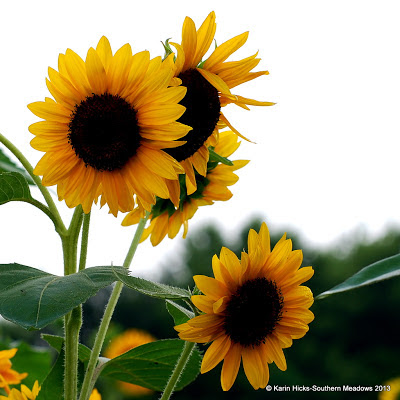 Next, I have my first guest post about easy ways to learn how to identify a few of our native trees.
Labels: history of sunflower multi-stalk sunflower Sunflower sunflower festival in Georgia