Spring may be slow to start but don't tell the birds that. Spring migration season is getting underway.


So, why do hummingbirds migrate?

Hummingbirds are largely tropical birds but have expanded their ranges to exploit rich temperate food resources and nesting space. Long ago they found lots of unoccupied niches in the U.S. and Canada that allowed them to avoid the intense competition in the tropics.


Research from banding efforts and citizen science projects, is showing that more and more hummingbirds are being reported year-round in North America from the Pacific coast through Arizona, along the Gulf coast and into the Southeast. In fact, this winter Georgia Hummers has banned and documented over 100 hummingbirds in Georgia.

As my regular readers know, two rufous hummingbirds (one male, one female) arrived in our garden late last fall and overwintered here. For my post on the banding process click here. 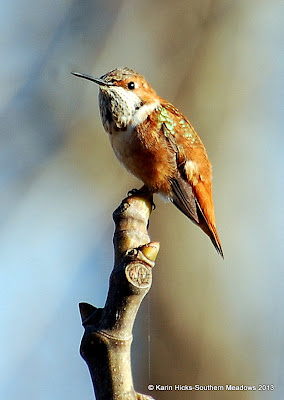 Male rufous
Look how brown he has become since he was banded in December 2012.

These two rufous hummers should be migrating to their summer breeding grounds soon. Their migration route from the Southeast to the Pacific Northwest/southern Alaska is unknown but often they follow in the heels of the sapsucker woodpecker migration. One theory being studied is the correlation of Spring migration to leaf-out times. Birds that rely on insects may start migrating when the leaves appear because it corresponds to the availability of the millions of insects the birds need to eat.


Hummingbirds are omnivores. Nectar is just the fuel to power their insect catching activity. They depend on insects that are not readily available in subfreezing weather so most of the hummers go back to their tropical home during winter months.

Are hummingbirds wintering in the Southeast
more frequently than in the past?

Hummingbirds are one of the least studied birds but more is being learned about them every year. For example, before 1998 there were no documented Calliope hummingbirds in Georgia. Over the past 15 years, it has become a regularly occurring winter species with over 20 birds banded and several returning multiple years. The Georgia Ornithological Society Checklist and Records Committee has voted to take Calliope Hummingbirds off the review list! (source: Georgia Hummers)

Some species of hummingbirds, like the Rufous, are tough little birds.  They are much more adapted to cold temperatures where freezing nights are common even in their summer stomping ground; unlike, the Ruby-throated hummingbirds (RTH) who don't handle the cold as well because they don't go in and out of torpor as readily as other species of hummers. Therefore to avoid the cold and scarcity of food they go south. In the Southeast, Rufous survive on nutrients from Sapsucker holes (see my post here for more on this subject) and insects that fly around on warmer days in addition to nectar sources from feeders.


How do hummingbirds know when to go?

Hummingbirds migrate in response to hormonal changes that are triggered by the length of day. Keeping feeders up or having a natural food sources available late into Fall will not entice hummers to stay. In fact taking feeders down will result in hummers feeding elsewhere and they may not bother to return to your garden the following year.


Migration is an instinctive behavior and each hummingbird species has its own migration strategy. The RTH begin their remarkable Spring migration northward across the Gulf as early as January but more typically in February and as late as March. They usually leave at dusk for their non-stop flight, of up to 500 miles, which takes between 18 to 20 hours depending on the weather. Before they begin this long trek they will pack on fat and almost double in size from 3.25 grams to 6 grams. By the time they reach the U.S. shores they will only weigh 2.5 grams!


New research out of Clemson, Taylor and Nebraska University show that RTH are arriving 12 to 18 days earlier than in past decades. The study contributes this to warmer temperatures. Warmer temperatures would influence availability of food which is a key factor in migration timing.


But according to James Van Remsen, curator of birds at Museum of Natural Sciences at LSU, what really counts biologically, is whether the peak period of migration has changed. That would mostly likely affect population biology. 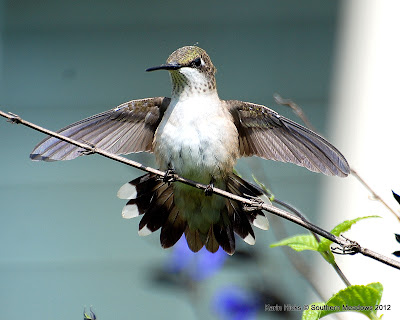 Hummers are solitary birds and don't rely on one another to survive. They are very intelligent birds and will remember year over year where every feeders hangs at their home base and along their migration path. They also know every flower within their territory and how long it takes that flower to replenish its nectar. Hummingbirds divide themselves by territory. Territories are chosen based on nectar, water and food availability. Most male territories are about a quarter of an acre. Females define their territory by their nesting site. Both male and female will aggressively defend their area. 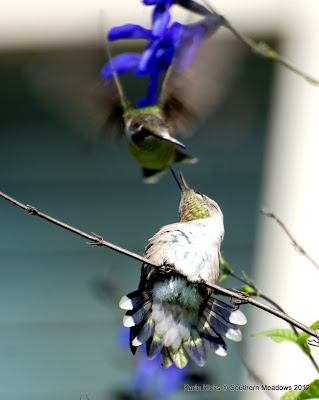 Because of their inquisitive nature they readily spot food sources and dive in to stake their claim. Hummingbirds have been known to hang around the same feeder the entire day just to guard it. It is a good idea to hang more than one feeder in your garden. Either hang them bunched together (one hummer can't possibly guard them all) or space them far apart. Also plant a selection of nectar plants that are pollinated by hummers.

The RTH should be arriving any day now. It will be very interesting to see how well the Rufous and RTH "play" together if they are here at the same time.  Will one chase off the other? Stay tuned...
Labels: hummingbird migration Ruby-throated hummingbirds Rufous hummingbirds