The rabbits are at it again....

Yesterday was a workout in the garden. Alas, it was time to tend to parts of the garden that have been neglected for much of the summer due to the oppressive heat. It has just been too hot to get out there and do any real hard labor. Well, during weed pulling and trimming of the shrubbery I discovered a good size rabbit hole under one of my knock-out roses. 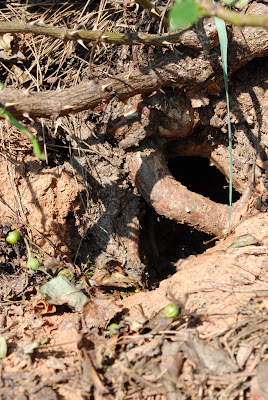 Now, I have a love/hate relationship with these creatures. They are really very cuddly and adorable looking. I love Beatrix Potter stories and had a pet rabbit as a child. However, they do so much damage to my garden often times I feel like Mr. McGregor running after Peter Rabbit with my shovel. Not that I would be fast enough to catch one and even if I was I would never kill it with a shovel. So, I have done some research on ways to get rid of the rabbits. Here are some options which I read about:

1. Mix 1/4 cup human urine, 1/4 cup Castor oil, 1/4 cup ammonia in a gallon of water and spray over the area you want to protect. Well, I think I'll pass on that one for obvious reasons.

2. Get a dog or cat. We are not a cat family and we just lost our dog of almost 16 years this summer. So that is not on the table right now.

3. Sprinkle powdered red pepper around the garden. Apparently rabbits are great sniffers so this may deter them. This sounds promising but they will just run to the neighbors and eat their plants. Well, that wouldn't be very neighborly of me would it.

4. Sprinkle blood meal around the plants after each rainfall (don't use this method if you have dogs because they'll be attracted to the scent and start digging...probably not the result you want...making the already large rabbit hole even larger)

Well, seeing that we currently don't have a dog I think I will go with option #4 and see how this works in reducing the rabbit population; at least in my garden.
Labels: rabbit hole rabbits remedies