Cardinal flower (Lobelia cardinalis) is still blooming as we move through September so it is this month's Wildflower Wednesday featured native plant. It has been raining for days here so it has been a challenge to get photos for this post but running out between showers allowed me to snap a few.

Ruby throated hummingbirds are at their peak numbers in September. The RTH that spent their summer north of us join those that stay in Georgia during their breeding season. It is not unusual for us to have 40-60 hummingbirds zooming around our property at this time.
Over the years we have included more fall blooming plants to support migrating pollinators because they need the carbs for their journey. If you don't already have a plethera of fall flowers be sure to add natives such as asters, goldenrod, liatris and sunflowers to help migrating insects.
Lobelia cardinalis grows in moist to wet soil conditions in marshes, stream banks and other marginal lands. We grow it in several garden beds that tend to retain more moisture. In a home garden cardinal flower is an excellent option for a rain garden or areas around a shady pond. It is a long blooming perennial begining in July and still going strong through September.
In addition to hummingbirds, cloudless sulphur butterflies also frequent these flowers in late summer, fueling up for their fall migration to south Florida. They typically fly 12 miles a day and are often sighted in Georgia gardens in spring, as they migrate as far north as Canada and again in late summer as they return to their overwintering grounds. Cloudless sulphurs are more cold-hardy that most butterfly species and a few adults may try to overwinter in north Georgia in sheltered areas.
I took this photo back in early July when the cardinal flowers were just begining to bloom. They open from the bottom to the top of the spike. This is one of nature's most intensly colored blooms and makes a summer focal point in our garden bed. 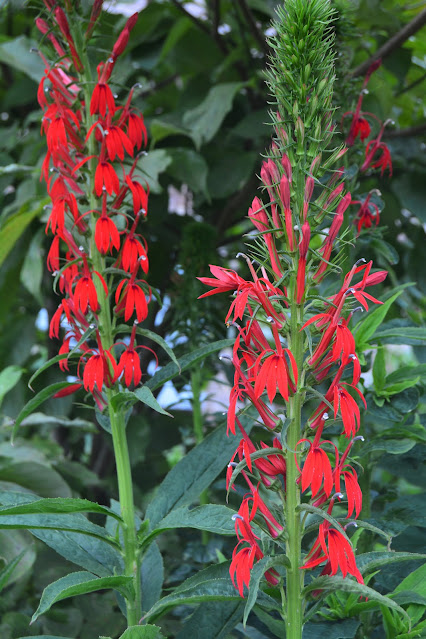 The spikes that flowered back in July and were pollinated have set seed. In each pod there are many tiny seeds. I have already collected some to share with friends, while others I will let self sow so that we have an even lusher planting next year.

The spikes can grow quite tall and often flop over and probably should be staked. In this garden bed we have several natives that have volunteered here and grow well with the Lobelia cardinalis including elephant's foot (Elephantopus tomentosus) and columbine as well as two annual natives that many would consider weeds but I love, fleabane daisy (Erigeron) and smartweed (Polygonum).

Cardinal flower has been a great performer in our garden, often filling that gap between summer and autumn blooming perennials. Thanks to Clay and Limestone for hosting this monthly meme. Be sure to check out Gail's blog to find more great plants.
Labels: blooms for pollinators cardinal flower hummingbirds rain garden wetland habitat wildflower Wildflower Wednesday