A Walk Around the Buttonbush

Cephalanthus occidentalis is a native shrub that provides for pollinators.  The diversity of insects the pin cushion like flowers attract is impressive. As soon as it begins blooming in June pollinators from all around make this shrub their forage destination. I took a walk around our shrub this morning to document the different pollinators visiting. Lets take a look.
Bumblebees were greatest in number. These native bees are critical pollinators for many edibles and flowering perennials. They are social bees that create a colony with a queen (similar to European honeybees but without the honey). They usually nest close to the ground under piles of wood, leaf mulch, compost piles or abandoned rodent holes. In winter the entire colony dies, except the queen, who will create a new colony next spring.
The bees speed around the circular flowers, sometime running into one another. It's like watching kids on bumper cars. Pure entertainment. 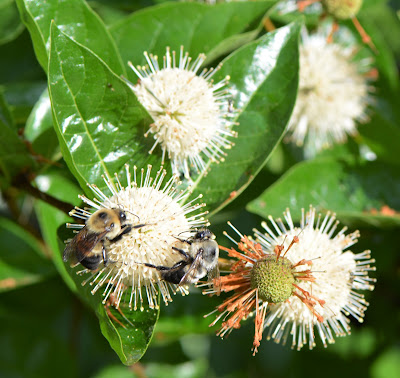 Carpenter bees were bountiful. Their shiny hiney and larger size makes it easy to differentiate between bumble and carpenter bees.
We often see honeybees on our flowers. They probably come from one of several neighbors who have apiaries. We are happy to support their hives with our garden.
Several species of butterflies were fluttering from bloom to bloom. We haven't observed as many large butterflies this year probably a result of our cooler, wet spring.  As summer begins to heat up, more and more butterfly activity is noticeable. Here are the species I noted. 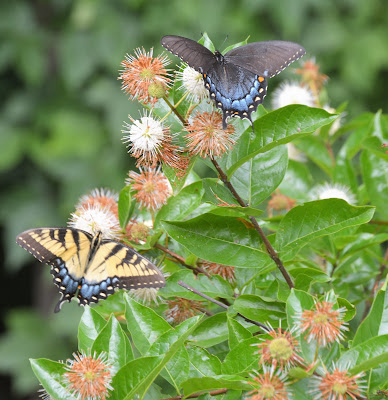 Hummingbird [Sphinx] moths are frequent visitors early in the morning and evenings. When they fly they remain suspended in the air, just like hummingbirds; hence, the name. Their appearance mimics bumblebees. These day flying moths host on a variety of plants including dwarf bush honeysuckle, dogbane and trumpet honeysuckle vine. Their caterpillar stage when fully grown drops to the ground and makes a cocoon in the leaf litter. [Another shout out for keeping leaf litter in your garden beds] 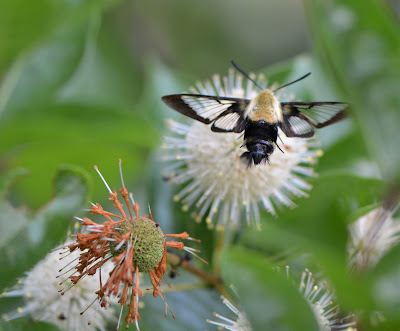 Flower flies [syrphid flies] are beneficial insects in the garden. We mostly see them in their adult form hovering around blooms. They mimic bees, wasps and hornets in appearance. The Virginia Flower Fly (Milesia virginiensis) mimics a hornet. It buzzes loudly as it hovers in front of objects, sometimes even people. This is where it gets the name 'news bee' as it hovers around people's head as if it is trying to tell you something (deliver the news). It is completely harmless to people so don't be alarmed.
Here is another angle, that shows the signature characteristics of flies, large eyes and open wings. The larvae of flies [maggots] are found in rotting/decaying wood where they feed until they develop into flying adults. 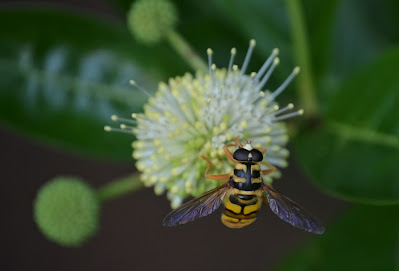 Teeny tiny flies/bees are just specks on the flowers. They are not showy like the butterflies or presidential as the larger bees and flies but they are industrious and very valuable pollinators. 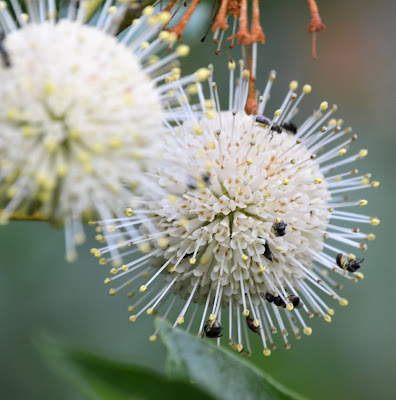 This photo was taken with 105 mm lens and then cropped. Hopefully, this will give you an idea of how small these little pollinators are.
A few different beetle species usually crawl around the round blooms. This morning, I only got a photo of one species, the longhorn beetle. They prefer blooms with inflorescence were they can move gingerly along eating pollen. 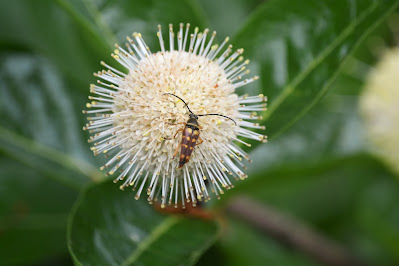 banded long-horn beetle
The beetles apparently do multi task, mating and foraging simultaneously. Why waist time. After mating the females lay eggs in dead or decaying wood where the larvae will bore through the wood. Support them at this stage by creating log piles for habitat. 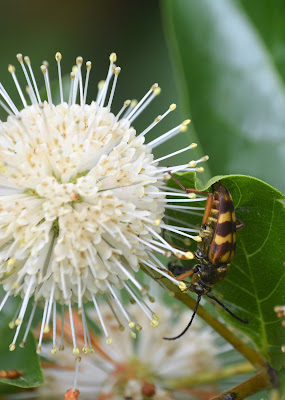 Mason wasps are beneficial insects in the garden. The four toothed mason wasp, often mistaken for the bald faced hornet, helps control leaf rollers, cutworms and other pests by feeding them to their larva. She uses abandoned bumblebees ground nests and hollow plant tubes or branches to make her nest and lay eggs.
The buttonbush also supports other insects and provides habitat and food for wildlife. I observed several insects skulking around the foliage. Leaf footed bugs are considered pests in most gardens because they have piercing, sucking mouth parts that they use to feed on plant juices from leaves, stems and fruit. 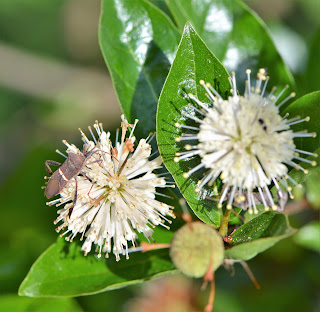 Sadly, Japanese beetles are abundant this year. We are even seeing them on many of our native plants. I don't need to say anymore regarding this pest. Just get out early in the morning with a container of soapy water and drop theses adult beetles in them. It makes one feel better and may make a small difference in their population.
There are small spiders that have deliberately made their webs between the stems of the shrub to catch a butterfly, bee, beetle or fly as they fly from flower to flower. We support spiders in our garden and this is one example of how plants support the ecosystem and cycle of life. 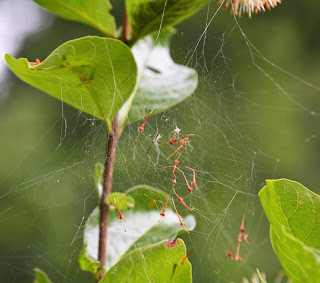 Ants are an important part of the ecosystem as well. They serve as 'ecosystem engineers' (moving soil) and as predators (prey on other animals). They eat a diet rich in proteins and carbohydrates and love sugar. They scurry around to find honeydew (a sugar substance produced by aphids) or get sugars that plants produce. 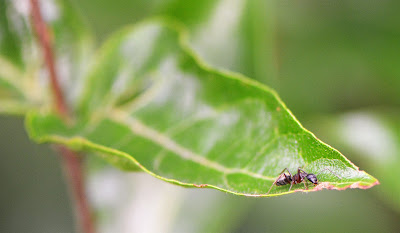 Button bush shrubs prefer moist soil conditions in sun to part sun. If you have an area that floods or has shallow standing water this would make an excellent choice. Pruning is only necessary to keep its shape. We limb ours up a little to allow for more planting space underneath and for ease of access while weeding. Despite the glossy leaves this is a deciduous shrub. The limbs provide nice structure in the winter landscape.
Our shrub grows in a flower bed at the bottom of a slope where it benefits from additional water accumulation. It is at the edge of the woods receiving morning and midday sun. Tall hickory, maple and tulip poplar trees shelter it from late afternoon sun exposure.
This selection of insects I have shared is just a small profile of how this plant supports pollinators, insects and the ecosystem. If you have the right conditions I highly recommend at least one buttonbush. You'll be smitten and will spend hours mesmerized by all the activity.
Labels: buttonbush habitat garden plants insects native shrub pollinator gardens raingarden