Late this summer we discovered a spider that we had never seen before. As is always the case when we find a 'new to us' creature in our garden we dive into research mode and try to figure out what we have. This time we came up empty. 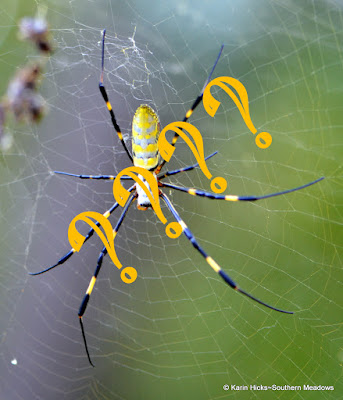 I reached out to one of my favorite ID sites, Bug Guide, to assist in identifying this spider. They did not disappoint. In a few hours we had our answer. We have a Nephila clavata, also known as the Joro spider.  According to Japanese Mythology, this spider is a deceptive shape-shifter (you can read the story at Yoki.com) but I prefer the Korean translation, which means Asian 'Fortune-Teller'. 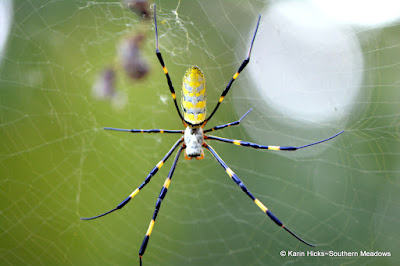 This is a golden orb weaver that is similar in size to our common black and yellow garden spider (Argiope aurantia); however, the Joro spider is native to East Asia (Japan, China, Korea and Taiwan). How did this lady find her way to our garden? More research was required to unearth her story.


According to a 2014 study (*) by Georgia Museum of Natural History at UGA, several Joro specimens were collected in three Northeast Georgia counties (Barrow, Madison and Jackson). These were the first confirmed Nephila clavata in North America and scientists think they arrived as stowaways on cargo ships. Obviously, we are not close to a port but we are located along I-85, a major commercial transportation corridor. It is believed that shipments traveling through our area contained egg sacs, which hatched spiderlings upon arrival. The study sited Braselton Park (in Braselton, GA) as one of the collection locations, where they found a female spider with two male spiders attending her web. This park is about 10 miles away from us and located near a thriving warehouse and distribution district, which deals with overseas freight. 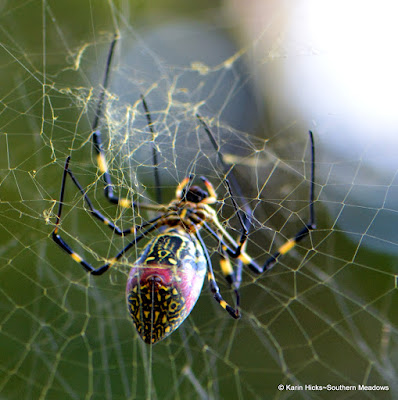 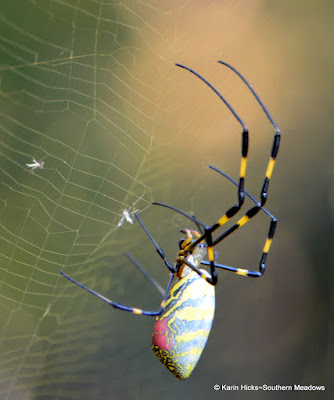 The Joro spider is pretty spectacular looking. The top of the female's abdomen has a wavy black and yellow pattern while the underside is an amazing black and yellow maze with distinct red blotches. The black and yellow striped legs are also prominent. Our spider has gotten rather large over the past two months, approximately 4" wide [including its leg span].


The web of this spider is impressive too. She's set up at our woodland edge between two understory trees and large shrubs spanning a space of at least 5 feet. The web is built in three layers, uncharacteristic of orb spiders. The multilayered structure includes a large orb in the center with an additional front and back layer with irregular threads. The photo below doesn't do it justice, but the golden silk glistens when the morning sun hits the web. 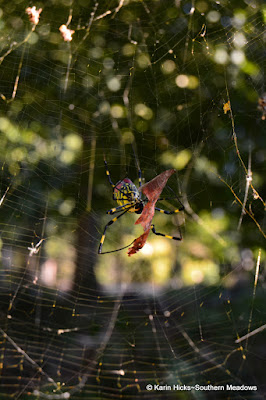 Our spider's web is filled with insects, leaves, and other debris so fortunately it is hard to miss. We definitely wouldn't want to mistakenly walk into this sticky web. When prey is caught in the web the Joro spider immediately bites her victim inserting a potent venom. [Note: The venom is not strong enough to harm a human unless one has an allergic reaction. If bit by a Joro spider, humans typically experience pain, redness and blistering that disappears within 24 hours.]

Male spiders lurk in the outskirts of the web and are significantly smaller and and light brown in color. I have searched assiduously but have been unable to locate a male. Mating season occurs in October, which produces a single egg sac containing 400-500 eggs. The silk cocoon is attached to the bark of trees, on leaves or other human structures. Adults die in the winter leaving the next generation to hatch in spring.

This Asian spider has a North American relative, Nephila clavipes or golden silk spider, which is common in the southeast. The impact this exotic spider will have on our local ecosystem is unknown at this point. Interestingly, there are about 60 species of non-native spiders, mostly originating from Europe and Asia, thriving in North America thanks to international trade. According to Hoebek "there is no indication that the Joro spider will be invasive to the extent that it would be disruptive or economically costly". I wonder how this spider will interact with our native spiders. Will it displace any of our garden spiders or other native spiders? 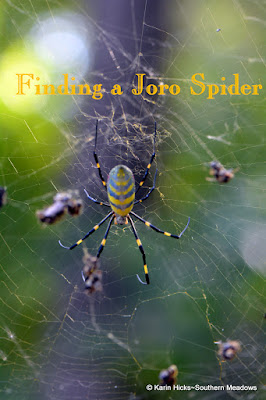 It is probable that the Joro spider has established itself in other areas of Georgia and across the country. Apparently this spider can withstand pretty cold temperatures (so be on the lookout northern friends). If you suspect you've discovered a Joro spider contact Hoebeke at rhoebeke@uga.ed. The initial discovery of this spider in our area was because of local residence, which demonstrates just how important citizen scientists are.