Great Crested Flycatcher, A Bird of the Treetops


One day in late May, I stepped out onto our back deck and noticed a Robin-sized, olive colored bird flying in and out of a nesting box that the Carolina Chickadees had vacated a few weeks earlier. Upon closer observation I saw splashes of bright yellow. Who was this striking bird?  I desperately tried to take photos but it was shy and not ready for a photo op.  So I just sat and quietly observed through binoculars. 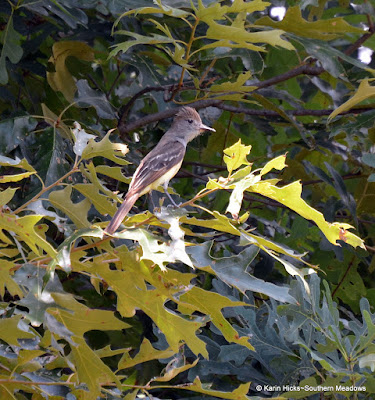 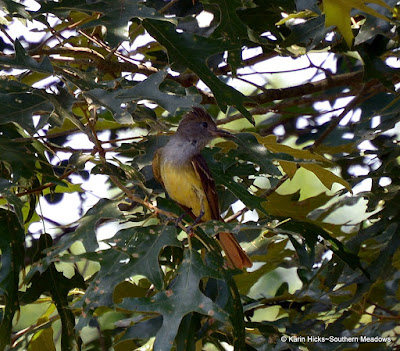 I watched this assertive flycatcher hunt high in the tree canopy. Sitting tight on a perch, waiting for insects to fly by within easy reach. A few beats of its wing, a graceful loop in the air, a snap of the beak and it would return to its post to wait for the next bite to come along. Although common(*) in Eastern woodlands it is rather inconspicuous, usually identified by its distinctive call rather than by sight. Fortunately for us it was nesting right out our back door so we delightfully watched this bird raise its young. 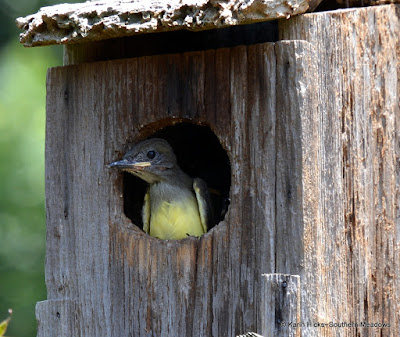 Both parents worked indefatigably bringing the babies insects. As the babies got bigger they got bolder. Sticking their heads out of the opening to investigate the world around them.This is when we really got our first good look at these young birds since our nesting box doesn't have a roof that opens. 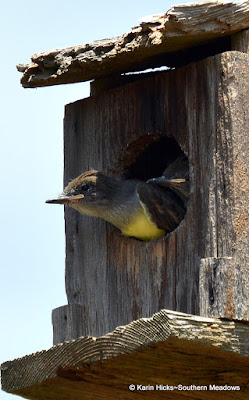 There were four babies who survived and they would often fight for first rights to peer out the entrance. 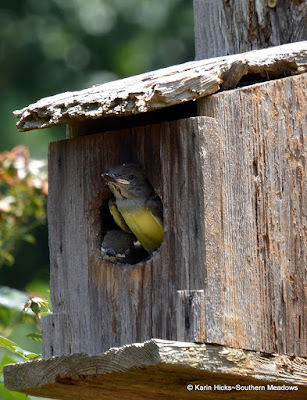 Soon they were prepared to fledge the nest. Although we were not ready to say goodbye, in an instant they were gone. They will spend the rest of the summer high in the treetops so we may not seen them often but we've learned their loud wheeeep and I'm sure we will hear them frequently before they depart in the dead of night for the tropics where they will spend the winter.

If you would like to attract the Great Crested Flycatcher to your garden mount a nesting box early in spring roughly 12 to 20 feet above the ground in an open woodland with clear flight paths to the box opening. Use organic methods in your garden so there are plenty of insects available to them. Create an edible landscape, for you and the birds, by planting fruit bearing trees and bushes such as mulberries, serviceberries, blueberries, grapes, and strawberries.