The two+ acre pond at the family farm in Mississippi with its decaying oak trees is the ideal habitat for several species of woodpeckers. Red-headed, Downy and Pileated are the three species we see most here.


Pileated woodpeckers are the largest of the common woodpeckers in North America and are about the size of a crow. They are impressive with their zebra striped heads and distinctive red crest. They forage for their favorite food, carpenter ants, by digging large, rectangular holes into trees. These holes are very extensive and attract other woodpeckers and house wrens.

A Pileated pair will stay together for the year. They usually nest in older trees because they are larger. A pileated can spend up to 30 days carving out their nesting cavity. The nest holes they make also provide shelter to other species including swifts, owls, ducks, and bats.

Red-headed woodpeckers are smaller, about the size of a robin. They like open woodlands, forest edges, and wooded swamps. They are mostly solitary birds; however, both parent help raise the young. Nesting cavities are usually in a bare, dead tree and the male's winter roosting cavity is sometimes used or a new cavity is created. 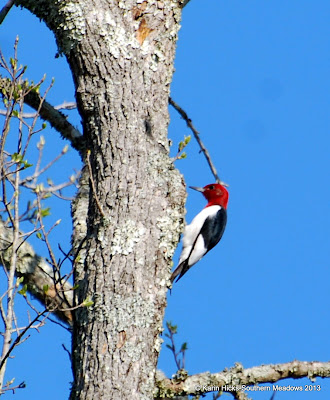 The Red-headed are opportunistic foragers eating insects, spiders, earthworms, nuts, seeds, berries, fruit and occasionally bird eggs and mice. They don't usually drill for food like other woodpeckers. We often see them flying out from a perch to catch insects. 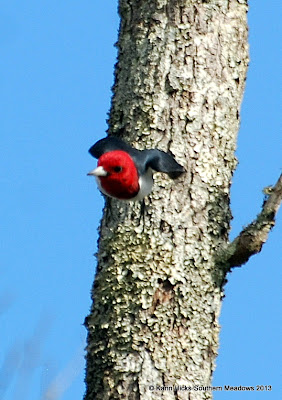 They gather nuts and store them in crevices and holes and feed on them throughout the winter. If a nut doesn't fit in the intended hole they will break the nut into pieces instead of making the hole larger. They are the only woodpecker that will cover stored food with wood or bark.

One morning there was a lot of squabbling going on between two woodpeckers over a particular cavity. I first saw this red-headed woodpecker at the cavity looking like he owned it. 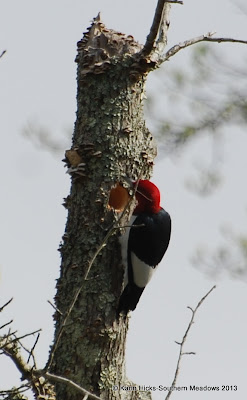 But not so fast. Who is coming? 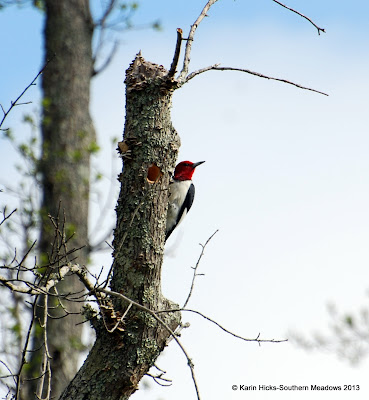 Back and forth the Downy went, being very vocal. Was this in fact the nesting cavity of a downy? The red-headed eventually left, leaving the Downy to claim this hole.


The female Downy is usually the one to select the nesting site and then both male and female will excavate the cavity which usually takes a week to complete. Downies typically drill a new cavity each year. Previous year's cavities are used by chickadees, titmice, wrens and sometimes bluebirds.


Occasionally a red-headed woodpecker will finish excavating a cavity that was started by another animal. Is that what was going on that morning?

The Red-headed woodpecker was once common but is a declining species. A 50% loss has been recorded across its range since 1966. A loss of potential nesting sites-cutting down of dead trees-is one possible reason. Loss of an important food source-beech trees-has also contributed to the population decline. The red-headed woodpecker is a protected bird and is listed as near threatened. The good news is that I counted 7 red-headed woodpeckers at one time at the pond.

Habitat loss is the greatest threat to woodpeckers. While many species have adapted to suburban backyards and urban parks, some, like the Pileated woodpecker need large tracts of forest in which to breed. Without decaying trees they need to nest and raise their young their populations will continue to decline. As we witness at the family farm, there is a great deal of habitat overlap with woodpecker species and little competition for food and nesting sources since each of these woodpeckers has their own niche.

Some fun facts about woodpeckers: