This winter I have attended several talks on the conservation of the monarch butterfly which has opened my eyes further to the importance of gardening with native plants and creating native habitat to help conserve these iconic insects. 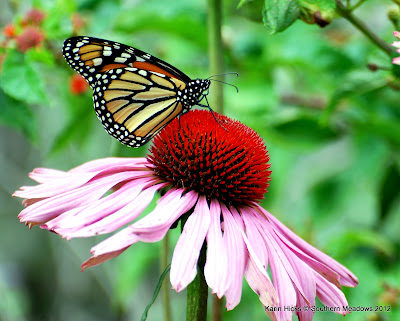 If you garden for butterflies you probably have milkweed to attract monarchs and a variety of other butterfly species. Recent studies have shown that planting non-native milkweed is detrimental to the Monarch butterflies. Why you ask? Well, there is evidence that the non-native milkweed species are changing the migration timing of Monarchs. The tropical milkweeds have longer bloom periods and encourage Monarchs to stick around instead of continuing on their epic migration. By lingering they are put at risk of the deadly OE parasite and also at risk of dying in our winter.

What is OE? Ophyryocystis elektroscirrha (that is a mouthful!) is a parasite that infects monarch and queen butterflies. It is a protozoan or single celled organism that must live within a host to grow and multiply. Between infections it lives as a spore and can survive extreme environmental conditions.

OE was first found in the 1960's in Florida and as far as researchers have discovered the monarch and queen butterflies are the only known host. Over the years OE has been discovered in monarch populations world-wide and the research is showing that OE has co-evolved with the monarchs. You can see in the diagram below the life cycle stages of OE in the monarch. You can click on the photo credit below for a larger view.

OE only reproduces in the butterfly's body. According to Monarch Watch spores can be transferred from an infected male to a healthy female during mating. Infected females also pass along OE to their offspring. When the female lays her eggs, dormant spores are scattered on the eggs and milkweed leaves. When the caterpillar emerges from the egg the first thing it will eat is its eggshell and then begin munching on the leaves thus ingesting the spore. 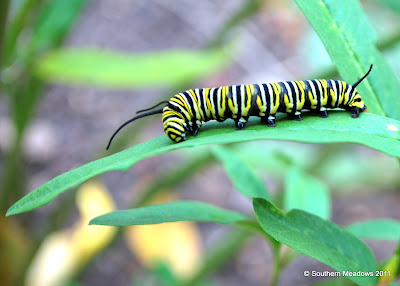 Most butterflies with mild infections look and act normally but they are usually smaller than healthy adults, weighing less and with shorter forewings. The only way to know for sure is to test for the parasite. Volunteers can participate in this process by collecting samples from monarch butterflies they see in their garden. (More information on participating is provided at the end of this post)

Heavily infected butterflies often die before emerging from their chrysalis. If they do emerge they are weak and often fall to the ground before they can expand their wings. These butterflies do not survive long. 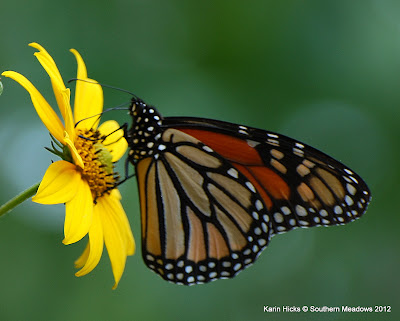 In North America the populations of monarch butterflies are divided into three groups. The Eastern where the monarchs breed east of the Rocky Mountains and overwinter in the transvolcanic mountains in central Mexico. The Western population which are west of the Rocky Mountains where the butterflies roost along California's coast and finally the Non-migratory which breed year round in southern Florida, coastal Texas, Hawaii and the Caribbean. Of these populations the Eastern population is the least heavily infected at 8%. The Western population is at 30% and the Non-migratory group is the highest with 70% of the population heavily infected with OE.


So, this begs the question, what implications does the monarch migratory behavior have on the occurrence of OE? Well, new research at the Altizer lab at the University of Georgia has shown that migration allows hosts to escape infected habitats reducing disease levels. Diseased butterflies lost more of their body weight during flight and therefore would not survive the long migration to Mexico thus weeding out the parasites with them. Non-migratory populations retain their weakened butterflies and so the parasites persist. Researchers also found (in a 2010 study) that wild monarchs in the non-migratory populations were smaller. The Eastern population had the largest and most elongated forewings and largest bodies. 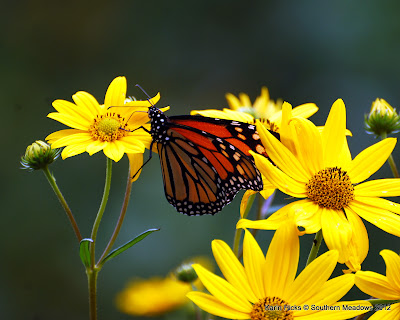 So what does all this mean for the average butterfly gardener? To best support healthy monarch populations it is best to bring into cultivation milkweed seeds from local sources. Migrating monarchs have co-evolved with the native milkweed, timing arrivals and departures with bloom periods over many generations. There are 22 milkweed species native to Georgia and for a complete list and plant profiles click here.

If you are so inclined you can participate in the Project Monarch Health which is a citizen-science survey where volunteers sample wild monarch butterflies to help track the spread of the OE parasite in North America. This is great activity for backyard gardeners, school groups, nature centers, senior groups and is done by people of all skill levels and age groups.
Labels: butterfly migration insect disease milkweed monarch butterfly conservation native plants OE parasite