Soul Food for a Year of Luck

There is a Southern saying "eat poor that day, eat rich the rest of the year".

It is a tradition in the South to eat black-eyed peas on New Year's day. It is thought to bring a year of prosperity and luck. Black-eyed peas were introduced to the the United States in the 17th century and grown as food for livestock. They are in fact not peas but beans (legumes). The crop grew well in our hot and humid conditions. It is thought that this crop saved Southerns from starvation during the Civil War. During Sherman's "March to the Sea" crops were burned and destroyed. The Union soldiers ignored the fields of black-eyed peas since it was considered animal feed. It then became a nutritious staple for surviving Confederates who considered themselves lucky to be left with some food and peas became a symbol of luck.

Hoppin' John is a traditional hearty meal made with black-eyed peas simmered with ham hocks or spicy sausages. The first written recipe appeared in The Carolina Housewife by Sarah Rutledge (published anonymously) in 1847.

There are many variations of this dish but this is my take on it.

Soak peas in water overnight. Remove any peas that have floated to the top. Rinse and cook peas for 6-8 hours. Place bacon and ham in large pot and fry over low flame until almost all fat is rendered. Add onion and cook, stirring until limp. Pour in water, add garlic and seasonings, bring to a boil. Drain peas and add to boiling mixture. Lower heat, partially cover pot and let simmer gently for 1-2 hours until liquid has reduced to a savory, thick sauce. Add hot pepper sauce and jalapenos to taste. (We like ours spicy hot).

Some cook peas and rice in one pot. I prefer to prepare the rice separately. I also serve the dish with a good side of homemade cornbread. 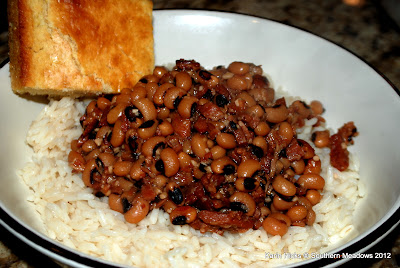