Ruby-throated hummingbirds are often seen from March to late October in our area because this is their native breeding ground; but in late November this year, my husband spotted a hummingbird in our back garden. I kept a look out but for two weeks this hummer eluded me. Finally, I saw it at one of our feeders and I was, let's just say, more than ecstatic.  We had kept our feeders up for any late migrating hummers but never thought that we would get a hummingbird to overwinter in our garden. I always assumed that winters would be too cold in North Georgia for hummingbirds. I couldn’t have been more wrong! 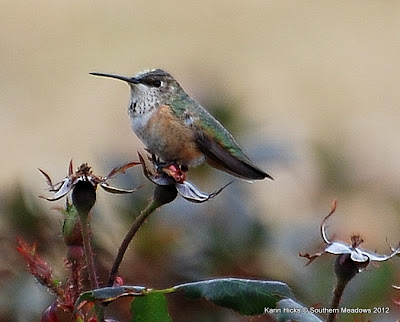 For about a week I tried to photograph this hummingbird but it was fast, never sitting still for long especially when I had my camera ready and in hand. I later learned that this hummer has a reputation for being feisty and outflies all other species found in North America. I was finally able to get a shot of the hummer sitting amongst the rose bushes (photo above), one of its favorite places to fly around. At around the same time I found an organization called Georgia Hummers and sent them the photo for help identifying this hummer. This started a series of emails with Karen, one of their banders. The Georgia Hummers Study Group is an organization that "works at furthering scientific knowledge and enhancing the public's appreciation of hummingbirds through banding and other studies."

We set up an appointment for her to come out and try to capture the bird to band it. I was instructed to take down all the feeders but one the night before so that the hummers would only focus on the one feeder, making it easier to capture them. When Karen arrived I asked her about the possibility of having two wintering birds because I was pretty sure I saw them chasing each other. “Yes, it happens” and just as those words came out of her mouth the two hummers came zooming by. Karen quickly set up her equipment. I am not going to go into the details about how the birds where captured nor show photos because there are people that will try to do this at home and capturing hummingbirds is illegal without proper licensing and training! What I can tell you is that it is a completely safe and quick process. There are only 3 active banders in Georgia and approximately 100 in the United States. It is an arduous process requiring immense training, skill and knowledge. But what a fascinating job these dedicated volunteers have!


The first hummer Karen captured was a male Rufous. Visually, she can see a lot of rufous in its tail and knows that it is most likely a male.

She is able to confirm this through measurements, the colors in the tail feathers, striations in the beak, and the overall size of the bird. Females will be bigger than the males.

In addition to collecting measurements, she inspects the overall health of the bird and examines how much fat the bird is packing by blowing through a straw to see beneath the feathers. How much fat the bird is gaining is an indication of whether or not the bird will be powering up to migrate. If it is storing fat it is getting ready to head out.


The Rufous is the most common winter hummingbird in Georgia. These birds can arrive as early as July but it is more normal to see them here in late fall. They stick around until February but some as late as April when they start their long migration to the Pacific Northwest and southern parts of Alaska to breed.

The Rufous are well adapted to handle cold weather. They can easily go in and out of torpor which is a hibernation-like state that helps them conserve energy on cold nights or when food is scarce. The hummingbird will lower its body temperature by about 20 degrees and up to 50 degrees. The hummer can raise its metabolism and get its body temperature back to normal within a few minutes but it can take up to an hour.

Karen was so incredibly patient waiting around for several hours but as the day warmed there was less activity at the feeder. The hummers were most likely out catching insects and feeding at sapsucker holes. Hummingbirds and Sapsuckers have a symbiotic relationship. Sapsuckers will drill holes in trees to get to the sap. Hummingbirds get a little help from these friends by feeding at these holes when other food sources are scarce. The hummers return the favor by fending off other birds who may try to feed there while the sapsucker is at another hole. Scientists have analyzed sap and found that it is very similar to flower nectar containing sucrose and amino acids so together with the sap and insects that fly around these holes the hummers have an excellent substitute.

Karen packed it up for the day and rescheduled to come out later in the week. She arrived first thing on a chilly morning when the hummers would be actively trying to feed at the feeder. The second attempt to capture the female was successful. This girl is definitely the dominant bird, chirping loudly and tirelessly chasing off the male. 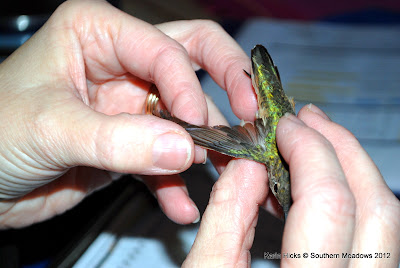 Inspecting her feathers, Karen could see that she was beginning to molt and would be getting pretty new feathers for spring.

These two Rufous are both young birds. Banding records show that it is likely they will return next year if they make it past their first birthday. The survivorship of these young birds probably accounts for the increase in numbers that the studies are showing (ebird.org). If you host a hummingbird during the winter it is helpful to call someone out to have it banded for species identification so the research can grow as well as our knowledge of their migration patterns.

Karen is incredibly knowledgeable and I learned so much watching her in action. In addition to her volunteer work with Georgia Hummers she is the Manager at the Bird Watcher Supply and has been an avid birder for more than 20 years. If you live in Georgia and have a sighting of a winter hummingbird I encourage you to contact Georgia Hummers on their website here or their Facebook page here.

Georgia Hummers have documented 12 species of hummingbirds that visit Georgia during the winter months. So, keep your feeders up, make sure you have some shrubs and late blooming flowers in your garden and you could find yourself with a hummer or two in your winter garden.
Labels: banding a hummingbird Georgia Hummers Rufous hummingbirds sapsucker and hummingbirds winter hummingbird