Have you ever seen this moth in your garden?


This is the moth of the Eastern Tent Caterpillar (Malacosoma americanum), a native insect to the Eastern United States. Like all moths they undergo a complete metamorphosis (egg-larva-pupa-adult). The eastern tent caterpillar overwinters within an egg mass of 150-400 eggs. These masses are covered with a shiny, black material that encircles the branches of a tree. The masses are about the same diameter of a pencil. In early March, the eggs hatch.

It is one of the few insects that is recognized by most people by its home rather than appearance. The caterpillars are social creatures living together in large silk nests that they build in the crotches of trees. They are often seen on trees along the road in sunny locations. These caterpillars need the sun to heat their bodies so their nests are rarely found in shaded woodland areas.There are usually hundreds of caterpillars in a nest and it isn't uncommon for caterpillars from two or more egg masses to join together to form one colony. 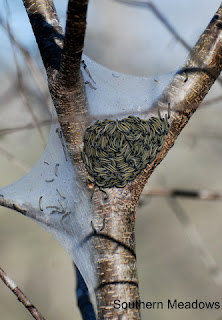 This is one I found in my garden. The caterpillars leave the nest several times a day: usually before dawn, midday and after sunset when it is not too cold. They feed on the leaves of ornamental landscape trees such as wild cherry, apple, crabapple, hawthorn, maple, peach, pear and plum. Note that in the adult stage (moth) they only live a few days and do not eat. I took these pictures early in the morning before they left the nest. 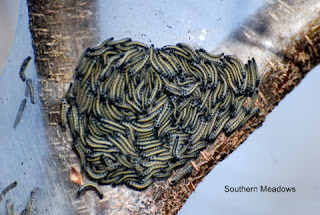 If you don't find it unnerving to look at hundred of caterpillars en masse, they are really interesting to watch. Here are two leaving the nest in search of breakfast. You can see the silk from the nest and how it covers the trunk of the tree. 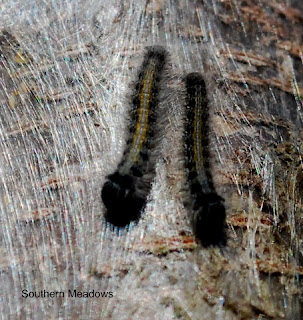 This photo was taken later in the morning after most of the caterpillars had left the nest. 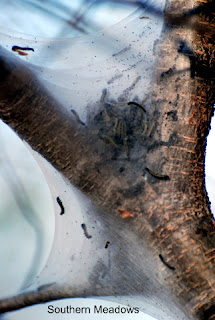 They are considered a pest because of their unsightly nests, the damage they do to trees and masses of wandering caterpillars on plants, walkways and roads. They can defoliate trees rather quickly if there is a large population but rarely do they do enough damage to kill a healthy tree. The trees usually recover and put out a new crop of leaves once the caterpillars are gone.

Do you have these caterpillars in your garden? How do you manage them?